The Trojans scratched out a 58-53 win at Arizona State on Thursday night just missing the cover while laying six points. It was an ugly showing, as the Trojans won despite shooting just 30% (18-of-61) from the field, including 25% (6-of-24) from behind the 3-point line. USC even struggled at the free-throw line, hitting just 61% (17-of-28), while turning it over 13 times. It cannot afford a repeat performance of Arizona will blow USC's doors off.

USC topped Arizona State on the road last time out Thursday, and eased by Cal on Jan. 29 in the most recent home outing. However, the Trojans are 0-3 ATS across the past three games following a 3-0 ATS run from Jan. 20-24.

For totals, the UNDER is 10-4-1 in the past 15 road outings, while going 29-12 in the past 41 games played on a Saturday. However, the OVER is 4-1 in the past five against teams with a winning overall record.

The Wildcats won and covered against UCLA in another showdown Thursday. Can they bring the intensity for another top-tier opponent on Saturday?

USC has won two of the past three meetings, including the most recent trip to Tucson on Jan. 7, 2021. The Trojans are also 5-1 ATS in the past six meetings, with the underdog cashing in each of the previous five installments in this series. 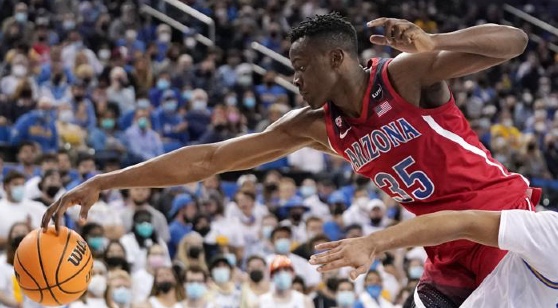 Arizona has covered just once in the past six meetings against USC. (AP)

INSIDE THE STATS - USC TROJANS

USC is coming off a very ugly showing at Arizona State, and perhaps they were caught looking ahead a little bit to this titanic showdown. For Arizona, they're coming off a huge game, and it will be difficult to match the kind of intensity it brought to the hardwood Thursday against UCLA. It's a good team, however, and Arizona should be able to protect its home arena against the upstart USC team. However, I expect this one to be decided by single digits rather than a double-digit win for the home side. And the books are all over the board in terms of the total. I think the UNDER is the play, especially after USC's performance the other day.