The Cavaliers head into this one with a pair of victories against Boston College and Miami-Florida, but both of those victories came in Charlottesville. The problems for the Hoos has been on the road, where UVA has dropped two in a row, and three of the past four. A win over Duke, the No. 1 team in the ACC, and the league's only ranked team, seems like almost a prerequisite to qualify for the NCAA Tournament with an at-large bid. Without a quality win over Duke, it will be difficult for mediocre teams like Virginia to qualify.

The Blue Devils have emphatically showed in the past two games that they are the team to beat, and there is a precipitous drop-off behind them. Duke spanked Notre Dame 57-43 in South Bend on Jan. 31, covering against the second-place team in the ACC, and then it blasted rival North Carolina at the Dean Dome in Coach K's final trip to Chapel Hill, 87-67, on Saturday. The OVER cashed Saturday, snapping a 4-0 UNDER run for the Blue Devils.

Virginia has won and covered three of the past four games, keeping them squarely on the bubble for the NCAA Tournament. But each of the wins and covers have come on home hardwood. It has dropped two in a row on the road since Jan. 22, getting dumped 69-65 against second-place Notre Dame on Jan. 29, and falling 77-63 at NC State on Jan. 22 as 1.5-point underdogs.

Duke has been the class of the ACC all season, and it has really flexed its muscle in the past couple of weeks. Winning showdowns at Notre Dame and at North Carolina has affirmed that the Blue Devils are the top of the mountain, and the rest of the league is still climbing, slipping on scree, and having a difficult time with their footing.

Duke has cashed in four of the past five games overall, while going 5-2 ATS in the past seven games against teams with a straight-up winning record. And, for what it's worth, the Blue Devils show up ready to work at the office on Mondays, going 3-1-1 ATS in the past five on the day every 9-5 worker loves to hate. 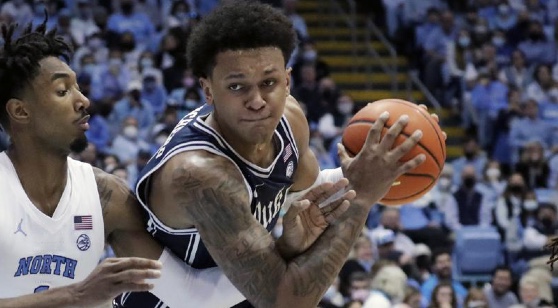 Duke has covered five of the past seven games against winning teams. (AP)

INSIDE THE STATS - VIRGINIA CAVALIERS

Virginia heads into this one desperately needing a victory over Duke to enhance its resume for the NCAA Tournament committee, but they way things have gone on the road for the Hoos during conference play, an upset seems very unlikely. The way Duke has played lately also makes a Cavaliers victory seem like a pipe dream.

In this final season for Coach K in Durham, the Blue Devils are looking very championship-like. They should be able to take the ACC regular season title, there doesn't appear to be many obstacles in the ACC Tournament, and we'll see what they have for the rest of the teams once the NCAA Tournament begins. First things first, however, as they must keep their eye on the prize and win the games they're supposed to win. I think Duke is able to win this one at home, but double digits is an awful lot to give up to a proud Virginia team fighting for their season each and every game. Look for Virginia to keep it within single digits.