The Fighting Illini registered a 74-57 victory on the road against rival Indiana on Saturday, it's second consecutive double-digit victory after a couple of close shaves to close out January. After averaging just 57.5 PPG in two wins over Michigan State and Northwestern from Jan. 25-29, the offense is back, as the Illini averaged 77.0 PPG in two wins over Wisconsin and Indiana Feb. 2-5. The Illini also have a pair of covers after an 0-4 ATS skid from Jan. 17-29.

These teams played a classic in Champaign back on Jan. 17, as the Boilermakers outlasted the Illini at State Farm Center by a 96-88 score in overtime as the OVER easily connected. The Boilermakers covered a 1.5-point underdogs. Now, the Illini would love to return the favor.

In that matchup, Purdue went for 19 or more points, led by Sasha Stefanovic with 22 points and eight rebounds, including five triples. Zach Edey was good for 20 points with eight boards on an efficient 9-of-14 shooting night, while Jaden Ivey chimed in with 19 points, eight boards, two steals and a blocked shot. Player of the Year candidate Kofi Cockburn struggled with his shot, going for 10 points while spending time in four trouble, but Alfonso Plummer picked up the slack with 24 points with six triples. Andre Curbelo was good for 20 points, too.

The Illini were dumped at home in the most recent meeting, losing 96-88 in overtime in Champaign. That snapped a 3-0 SU/2-0-1 ATS run in this series for the Fighting Illini. There is a slight 5-3 ATS advantage to the favorite in the past eight meetings, with a 5-3 lean to the OVER, too.

Illinois heads into this one with a 5-1 ATS mark in the past six games as an underdog, while going 5-0 ATS in the past five as a road 'dog, too. The Fighting Illini are also 9-3 ATS in the past 12 games against winning teams, too.

Purdue won 82-76 on Saturday, failing to cover a 9.5-point number. The Boilermakers have alternated covers in each of the past four outings while the OVER has cashed in each of those games.

For Purdue, the OVER has hit in four straight as a favorite, while going 5-1 in the past six games at home, too. The OVER is also a whopping 27-10 in the previous 37 at home as a favorite. 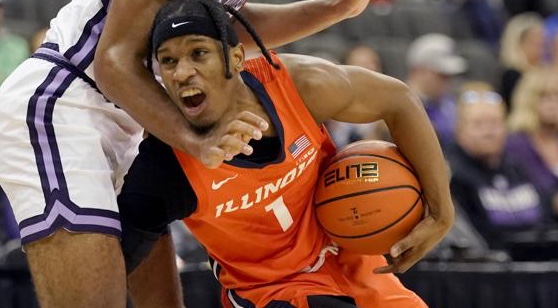 Illinois has cashed in nine of the past 12 against winning teams. (AP)

This is starting to turn into quite the rivalry in the Big Ten. Cockburn struggled mightily in the first meeting, so he'll be looking for redemption. Edey, Ivey and company each shot the basketball well in Champaign in the first meeting, and this time they'll be on their home floor in front of a raucous crowd, feeding off of the energy.

I think we're going to get another great basketball game on Tuesday. Illinois will bring it hard, and this one will be decided in the final minute, perhaps at the free-throw line. Purdue found a way in the first meeting in overtime, and I think they'll get it done again at home. Illinois catching the three buckets is worth playing, however, and we should see another OVER result here.