The Wisconsin Badgers (18-4, 9-3 Big Ten) travel to meet the Michigan State Spartans (17-5, 8-3) in a huge conference battle at Breslin Center in East Lansing, Mich. on Tuesday. Tip-off is scheduled for 7:00 p.m., and the game can be viewed on Big Ten Network.

It certainly wasn't pretty, but the Badgers gutted out at 51-49 win at home over Penn State on Saturday, coming nowhere near a cover as nine-point favorites while the UNDER easily connected. The 51 points marked a season low, but fortunately the 49 points allowed were the least yielded since a 34-point effort by Green Bay on Nov. 12 in non-conference action. The 51 points were the least amount of points scored in a victory since a 47-43 win in the NCAA Tournamant against Pittsburgh on March 18, 2016. The point total was the lowest in a victory during the regular season since a 45-44 win over Minnesota on Jan. 26, 2013.

The Spartans were routed in unlikely fashion Saturday, as Rutgers picked up an 84-63 win. Michigan State is a very ordinary 3-3 SU across the past six games, while failing to cover five times in the previous eight outings. In that outing against the Scarlet Knights, Sparty shot just 44% (23-of-52) from the field, including 46% (11-of-24) from downtown. Michigan State turned it over 13 times to nine for Rutgers, while the Scarlet Knights inexplicably outrebounded the Spartans by a 27-to-18 clip.

The Badgers have failed to cover five straight games since covering a two-point number at Northwestern on Jan. 18. The 0-5 ATS skid comes after a 5-0 ATS run from Jan. 3-18, so it's been a roller coaster ride for Wisconsin bettors. It's been over 15 years since the Badgers failed to cover six or more games in a row during the regular season.

In this series, Michigan State has won eight of the past 10 meetings overall, with the Badgers holding a slight 5-4 ATS advantage. The OVER cashed in the first meeting this season on Jan. 21, 2022 in Madison, while the Spartans cashed as three-point underdogs in the 86-74 win. The OVER has cashed in two in a row, ut the UNDER is 5-2-1 in the past eight in the series.

Sparty started out the season with a 9-4-1 ATS mark across the first 14 games, and it never had consecutive non-covers until an 0-3 ATS slide from Jan. 5-15 against Nebraska, Minnesota and Northwestern, all at home. 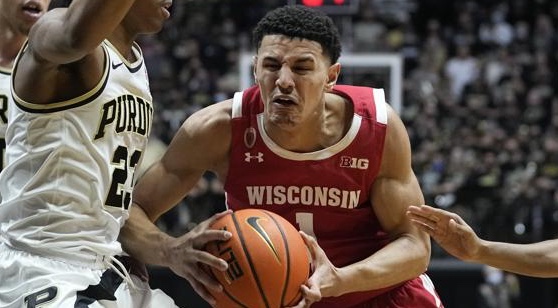 The Badgers have failed to cover the past five games overall. (AP)

The Spartans were embarrassed, so don't think for one minute head coach Tom Izzo hasn't been working this team hard, making them run gassers while doing extra free-throw shooting and anything else under the sun to make sure another blowout isn't in the offing. The Badgers weren't very good last time out, either, and there is improvement to be had despite the fact they actually won.

This is going to be an interesting game. Before last week, this looked like a marquee game, and it very much still is, even though a little luster was lost when Michigan State was routed by Rutgers. Wisconsin is looking for redemption after getting boat-raced by Michigan State 86-74 at Kohl Center in Madison on Jan. 21, but I think Sparty is able to scratch out a victory and get back into the win column after its embarrassing loss. However, look for the Badgers to keep it close in a game which should go right down to the bitter end.