The Michigan Wolverines are coming off an 84-79 road victory against Iowa. The Wolverines shot just 20% from beyond the arc but managed to shoot 50% from the field, grab 40 rebounds, and dish out 21 assists. On the defensive end, Michigan held Iowa to 22% shooting from three and had seven steals. Michigan has now won three of their last four, and are currently seventh in the Big-10 with an 8-6 conference record.

The 15th ranked Wisconsin Badgers come into this game after defeating Indiana on the road 74-69. Sophomore guard Johnny Davis led the way for the Badgers with 30 points and 12 rebounds. The close win against Indiana gives Wisconsin a 12-1 record in games decided by six points or less this season. The Badgers are off to their best start since 2016-2017, and are currently second in the Big-10 with an 11-4 conference record.

This will be the first time these teams have met this season. The last matchup was February of last year, a game Michigan won 67-59. The Wolverines have won three of the last five games against Michigan, dating back to the 2018-2019 season. I like the Badgers at home in a close game throughout. Johnny Davis has been playing excellent and Wisconsin has been pretty dominant at home this season. Backing the Badgers at –2.5.

Michigan has disappointed bettors with a 10-14 record ATS. In their last five games the Wolverines are 3-2 SU and ATS. They have seen recent success covering against Wisconsin, posting a 7-2 ATS record in their last nine matchups against the Badgers. The total has gone over in 13 of Michigan’s 24 games played including seven of the last 10 and four of their last five on the road.

Wisconsin will be the sixth ranked opponent Michigan has faced this season. The Wolverines are 1-4 against ranked opponents with their only win coming against Purdue. The offense has averaged 67 PPG during these games, however, on the season Michigan has averaged 72.6 PPG (147th), 47.1 FG% (39th), 34.3 3PT% (156th), 14.6 APG (81st), and 36.2 RPG (128th). Senior guard DeVante Jones has been playing great for the Wolverines as of late with two double doubles in his last three games.

Wisconsin has been profitable this season with a 14-11 ATS record. The Badgers have struggled covering as of late, going 2-6 ATS in their last eight and just 1-4 ATS in their last five games at home. The total has gone over in 11 of Wisconsin’s last 15 games and 16 times on the season. Going against this trend, the total has gone under in four of the last five games against Michigan. 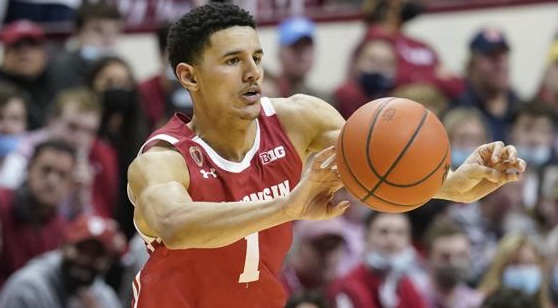 Wisconsin has failed to cover the spread in six of its last eight games. (AP)

I like Johnny Davis and the Badgers to win plus cover here. While the Badgers have not been great ATS lately, I think they handle business at home in this one. If this game were in Ann Arbor, I would more than likely be backing Michigan, but with the game being in Madison I’ll lay the points with the Badgers in this matchup.