After getting a taste of college football the past two weeks, things will heat up in conference play in the final two weeks of September. One of the biggest games of the weekend is a contest in the ACC between Miami and Louisville.

Both teams had some positives in their first seasons under new coaches last year and the victor of this game could emerge as a sleeper in the ACC race. 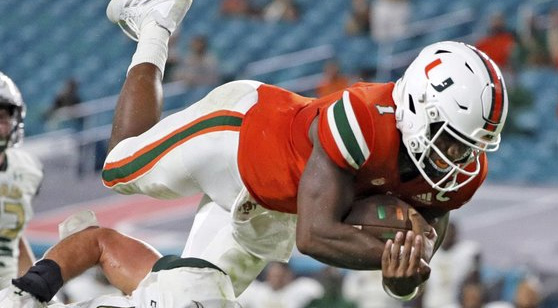 Miami QB D’Eriq King made his debut for the school last week as the Hurricanes defeated UAB 31-14 at home. (AP)

Miami and Louisville both are 1-0 with wins vs. Conference USA teams ahead of this ACC opener with the Hurricanes winning against UAB last Thursday and Louisville pulling away from Western Kentucky. Miami won convincingly in this series last season, which was the first meeting since 2014. These teams are both former Big East programs though their time in the league did not coincide.

Manny Diaz was born in Miami but attended Florida State, where he also started his coaching career. He has bounced around several schools in the past two decades before landing at Miami as Mark Richt’s defensive coordinator for three seasons starting in 2016. He accepted the Temple head coaching job following Miami’s 2018 season but after Richt retired he returned to the Hurricanes.

His first season was an inconsistent journey to 6-7; delivering quality wins over Virginia, Pittsburgh, and in this matchup but also suffering losses to Georgia Tech, Florida International, and a shutout bowl loss to Louisiana Tech.

Diaz lured two high profile transfers to Miami this off-season with former Houston quarterback D’Eriq King and Temple DE Quincy Roche though the headlines were negative on that front this week as CB Christian Williams announced his departure out of Miami after last week’s win.

Quarterback play was quite erratic for Miami last season and King was productive in the opener in the air and on the ground while Roche also made several impact plays for a defensive front that expects to be highly regarded in the ACC.

Miami led just 14-7 at halftime in the opener but pulled away with three touchdowns in the third quarter for a 31-14 win, posting a yardage edge of 495-285. Miami ran the ball effectively with 83 yards from King but also 134 on just 17 carries from Cam’Ron Harris with Miami compiling 337 rushing yards against one of the better Conference USA defenses.

The Miami defense also played well against the run after a few sloppy plays early in the game, holding UAB to 3.1 yards per rush. There were some holes in the pass defense however and UAB likely would have had better numbers if not for an injury to their veteran quarterback.

Playing on Thursday offers Miami a longer turnaround ahead of the ACC opener as Louisville’s opening win came last Saturday night. Hosting Western Kentucky as a nearly two-touchdown favorite, the Cardinals lost an early fumble and were down 7-0 not even three minutes into the game. Four unanswered touchdowns on mostly long drives put Louisville up 28-7 by halftime and the production edges were more substantial than the 35-21 final score with Louisville not adding points in the final 23 minutes of the game while comfortably ahead.

Head Coach Scott Satterfield went 51-24 at Appalachian State leading the team in a successful move up to the FBS level while claiming three Sun Belt titles. He wasn’t the first choice with the opening at Louisville, but he turned in a solid season of improvement going 8-5 last season with a Music City Bowl win. Louisville finished second behind Clemson in the ACC Atlantic, though a 45-10 home loss to the Tigers painted a significant gap in the standings.

Micale Cunningham had an efficient season in 2019 with only five interceptions and over 2,000 yards passing as the Louisville quarterback. He did throw an interception in the opener but also had a career high of 343 passing yards as Western Kentucky’s defense is effective stopping the run. Satterfield’s offenses usually are run-heavy but being held to 3.8 yards per rush, Louisville took some shots downfield in the opener and hit a few big plays.

Louisville also had a good defensive showing after an inconsistent campaign in 2019. Louisville was among the worst run defenses in the nation last season allowing 5.6 yards per carry and eight times last season the Cardinals allowed 34 or more points. All five Louisville losses came by double-digits last season and the Cardinals didn’t deliver many quality wins with the best results at Wake Forest, home vs. Virginia, and in bowl action vs. Mississippi State.

Heisman Up for Grabs?

The result Saturday will likely boil down to who performs better among the two star quarterbacks with both King and Cunningham deserving mention as Heisman candidates. King opened as low as 30/1 while Cunningham was around 100/1 this spring.

King is now down to 9/1 at some outlets while Cunningham’s price has hit as low as 20/1. Both teams have a shot to produce a strong enough record to keep either in the conversation with a possible edge to Cunningham as Louisville doesn’t have to play Clemson in this season’s ACC free-for-all race.

Louisville played Clemson and Virginia in back-to-back weeks in late October, splitting those games before a bye week and the road trip to Miami. That situation seemed to favor the rested Cardinals as Miami was riding back-to-back road wins including defeating rival Florida State the previous week.

Both teams had long scoring drives early in the game but Miami kept its offense going with a 35-14 lead by halftime. The final yardage favored Louisville 496-449 but the Cardinals lost three turnovers.

Miami QB Jarren Williams threw six touchdowns while Miami rushed for 6.2 yards per carry in a convincing result. After scoring 52 vs. Louisville in what was the home finale, the Hurricanes would score only 41 points in the next three games combined, all losses to lesser teams than the Cardinals.

-- Louisville is 5-2 S/U and ATS at home under Satterfield though the program is 23-38 ATS as a home favorite since 2007, only fitting that role three times last season coming off a 2-win 2018 campaign.

-- Louisville had won and covered in three straight meetings before last season’s 52-27 win for Miami.