Originally, the Colorado Buffaloes were scheduled to host the Utah Utes on Friday night.

However, the cancellation of Michigan-Ohio State left an opening in FOX’s Big Noon Saturday that both programs were happy to fill.

Although Colorado and Utah will be squaring off at 10:00 a.m. Mountain Time, they will have national exposure that they wouldn’t have received otherwise.

It’s been a rough season for the Utes. Utah didn’t play its first game until November 21 due to a prolonged COVID outbreak within the program.

The Utes were trounced 33-17 at home by USC in their first game despite being a short favorite. They narrowly lost as a nine-point underdog to Washington the following week before picking up their first win of the season last week against Oregon State.

Utah had a 30-10 lead at the start of the fourth quarter, but Oregon State scored twice in the last 12 minutes to cover the number as a double-digit underdog.

Colorado is having a great first season under Karl Dorrell. The Buffaloes are one of two unbeaten teams in the Pac 12 at 4-0, and they have secured the cover in all four of their games.

They were sizable underdogs against UCLA and Stanford in their first two games, so Colorado paid off nicely for moneyline bettors.

The Buffs became the only Pac 12 team to play a non-conference game when they hosted San Diego State at the end of Thanksgiving, and they knocked off Arizona last week. 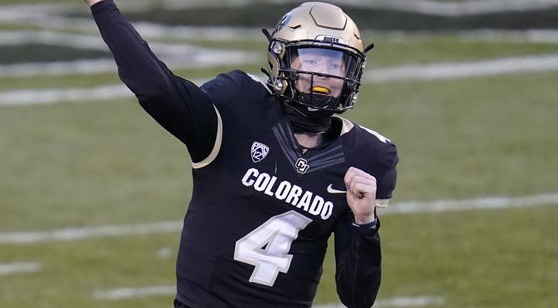 Colorado can clinch the Pac-12 South on Saturday morning if it can beat Utah at home. (AP)

Utah put together one of the best seasons in program history last year. The Utes went 11-3, but they lost a lot of talent from that team.

Kyle Whittingham knew that this was going to be a rebuilding season, so he hit the transfer portal and acquired grad transfer Jake Bentley from South Carolina to replace Tyler Huntley at quarterback.

Bentley hasn’t been great in his first three games at the helm. He has completed 64.1 percent of his passes for 6.3 YPA with three touchdowns and four interceptions.

There isn’t a better option as Texas transfer Cameron Rising suffered a season-ending injury against USC, leaving former walk-on Drew Lisk as the only backup with experience. Bentley has had some success running though with 14 carries for 103 yards once sack yardage is taken out.

Track star Ty Jordan has emerged as the best running back on the roster. The 5’7 freshman from Mesquite, Texas didn’t appear to be the likely No. 1 back in October, but he has been a home run hitter with 6.7 YPC. Devin Brumfield is averaging 4.0 YPC as the Utes are averaging 4.9 YPC.

Tight end Brant Kuithe was the only known quantity in the passing game at the start of the year. Kuithe is the Utes’ leading receiver, but he has just 16 receptions for 122 yards. Bryan Thompson has caught a few long passes, yet Bentley hasn’t been throwing downfield too often.

Utah’s defense is ranked 31st in defensive SP+. It's as hard as ever to run on the Utes as the front seven is allowing just 3.6 YPC and 104.7 YPG. Opponents are taking to the air often, but the Utes have already picked off five passes with Vonte Davis leading the way.

Although this is an atypical season, the early returns with Karl Dorrell are promising.

Colorado is much better than anyone believed after Mel Tucker left for Michigan State following a single season in Boulder.

Sam Noyer has been one of the best stories of the season. Noyer was asked to move to defensive back under Tucker and entered the transfer portal this offseason.

Dorrell convinced him to stay though, promising him a chance to become the starting quarterback. Noyer emerged as the top option this summer and is completing 62.1 percent of his passes for 7.2 YPA with four touchdowns and four interceptions. He is also the second-leading rusher on the team averaging 4.7 YPC with five touchdowns.

Jarek Broussard got off to a great start this season. He ran for at least 120 yards in his first three games before taking things to another level last week against Arizona. Broussard had 25 carries for 301 yards to become the Pac 12 Player of the Week. He is averaging 28.8 carries per game, establishing himself as Colorado’s workhorse back.

The leading receiver on the Buffs is Dimitri Stanley. Stanley has 15 receptions for 246 yards and a touchdown, but he has not been as productive the last two weeks.

K.D. Nixon has primarily been catching underneath routes (5.9 YPR) since his return although he was one of Colorado’s best receivers last year, while freshman Lavontae Shenault had nice outings against Stanford and San Diego State.

The Buffaloes rank 50th in defensive SP+. Colorado has one of the best secondaries in the conference, allowing just 5.5 YPA, but the run defense has been an issue. Opponents are averaging 4.9 YPC against this front seven.

Utah is close to tying the all-time series though thanks to its performance since these teams joined the Pac 12. The Utes are 7-2 against the Buffaloes since 2011. These teams didn’t play for almost five decades before their first game as Pac 12 rivals, but they played almost annually in the first half of the 20th Century.

The Utes hammered the Buffaloes 45-15 on their way to clinching the Pac 12 South last year. Huntley completed 14 of 17 passes for 165 yards and two touchdowns, and Kuithe found the end zone three times. Colorado finished the game with just 217 total yards of offense.

-- Utah has covered in four straight games against Colorado

-- The under has cashed in four of the last five games