The Buffalo Bulls are one of the biggest favorites on Championship Weekend. Buffalo hasn’t won the MAC Championship since 2008, but Lance Leipold has the Bulls primed to break that streak.

Leipold is one of the hottest coaches at the moment, and this could be his last game on the sidelines with Illinois and other schools reportedly in hot pursuit.

As for Ball State, the Cardinals are making just their second appearance in the MAC Championship Game, and they are one of four teams that have yet to win a conference title during the championship game era.

How to Handicap Ball State vs. Buffalo

The Bulls have absolutely shredded their opponents this season. They have won all five of their games by at least 19 points, and Buffalo has scored at least 42 points in each game. That offensive firepower has led to four of Buffalo’s five games going over the total.

Buffalo is 4-1 ATS after dismantling outmatched Akron 56-7 last Saturday. The Bulls scored the first seven touchdowns as this ground game churned out 428 yards against the Golden Flashes.

It’s been a little rougher road for Ball State. The Cardinals lost their season opener against Miami of Ohio, but they rallied to win five straight games in order to win the MAC West.

Only one of their five victories has come by more than seven points, so the Cardinals failed to cover in their first three games before cashing for their bettors in their last three games.

Ball State had to win a thriller against Western Michigan last week in order to play in this game.

The Broncos led 27-13 entering the fourth quarter, but the Cardinals scored two touchdowns in less than a minute to tie the game and then pulled ahead with a 22-yard field goal with under 30 seconds remaining.

Western Michigan initially scored on an improbable play with over a dozen laterals as time expired, but that call was reversed and allowed Ball State to win its division. 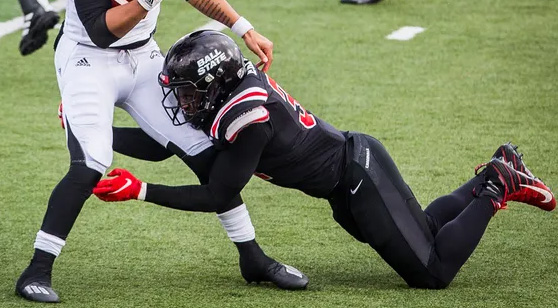 Ball State’s offense took an unexpected hit when top running back Caleb Huntley announced that he was opting out after just three games in order to prepare for the 2021 NFL Draft.

Huntley had run for 437 yards and six touchdowns, averaging 5.5 YPC while running for over 100 yards in each outing.

Tye Evans and Will Jones have largely split the duties since that point with both players averaging 4.5 YPC.

Drew Plitt had a breakout junior season, and he has been solid as a senior. Plitt has completed 66.3 percent of his passes for 8.4 YPA with 13 touchdowns and five interceptions for Ball State this year. He isn’t much of a running threat though, leading to Plitt being sacked 20 times.

The best playmaker on the Cardinals is Justin Hall. Hall is the leading receiver and third-leading rusher on Ball State.

The 5’9 senior from Georgia had a big game against Western Michigan, and he has 44 receptions on the season for 620 yards (14.1 YPR) with three touchdowns to go with 176 rushing yards (7.3 YPC). Yoheinz Tyler and Antwan Davis have been consistent targets in the passing game too.

The Cardinals don’t have a good defense. They are allowing 27.5 PPG and 432.2 YPG, as the secondary is one of the worst in the conference.

Opponents are averaging 8.1 YPA and 284.3 YPG against this defense, and that might lead to the Bulls taking to the air more often.

This is one of the most impressive offenses in the country. Buffalo leads the nation in scoring (51.8 PPG) and has the most effective ground game in college football this year.

The Bulls are averaging an FBS-best 7.5 YPC and 344.2 YPG behind a rugged offensive line and two excellent running backs.

Jaret Patterson ran for over 1,000 yards in just five games. This is Patterson’s third straight 1,000-yard season, and he set a record with the best two consecutive games in FBS history by running for 710 yards and 12 touchdowns against Bowling Green and Kent State.

Patterson is averaging 8.3 YPC with 18 touchdowns, finding the end zone at least twice in each game.

Kevin Marks Jr. has put up starter’s numbers as a back-up. Marks has run for 510 yards (7.5 YPC) in five games with five touchdowns. He is more of a straight-line runner than Patterson, and these two make an impressive duo.

Those dizzying numbers have kept the pressure off QB Kyle Vantrease. Vantrease is throwing the ball just 17 times per game on average.

He has completed 60 percent of his passes for 821 yards (9.7 YPA) with six touchdowns and an interception. Antonio Nunn has been the main threat in the passing game with 20 receptions for 353 yards and two touchdowns.

The Bulls’ defense has been solid, but not spectacular. Buffalo is allowing 21.0 PPG and 367.2 YPG on the year. They have been fortunate in that they have played from ahead the whole year though, so opponents have been mostly one-dimensional.

Ball State is 7-2 against Buffalo. These teams first met shortly after the Bulls joined the MAC in 2000, and the Cardinals won that game 44-35. They scored at least 40 points in each of their first four meetings, and Ball State won three of those games by 20 points or more.

Buffalo’s first victory over Ball State was in one of the most important games in Ball State history. The Cardinals were 12-0 and looking to crash the BCS during the 2008 season with Nate Davis at the helm.

Ball State had more than 500 total yards of offense, but five turnovers were too much to overcome in a 42-24 Buffalo win in the 2008 MAC Championship Game.

Tyree Jackson was superb in the last game between these teams. Jackson completed 16 of 28 passes for 350 yards and four touchdowns in a 40-24 victory for Buffalo. Caleb Huntley had 151 yards from scrimmage for the Cardinals, but their passing game struggled to move the chains.

-- The underdog has covered in five straight games

-- The over has cashed in six of the last eight games

-- Buffalo is 7-1 ATS over its last eight games