With Washington unable to play, North runner-up Oregon has slid into the title game with a rare opportunity to be a conference champion without a division title.

USC meanwhile will look to take a perfect record into the bowl season despite no realistic hopes of getting the call from the College Football Playoff Committee.

Here is a look at Friday’s big game between two prominent Pac-12 squads.

How to Handicap Oregon vs. USC

These teams have only played five games each as it is a small sample ahead of a championship game.

USC is 5-0 while Oregon is 3-2 but the schedules have not been created equally and three of USC’s wins have come in late comeback situations. One of these programs has participated in five of the nine previous Pac-12 title games with four championships won but these teams have not met in this game before.

These teams did meet last season in this stadium and the result was a 56-24 win for Oregon as a slight road favorite last November and that is the only head-to-head meeting between the current head coaches. Entering the season with some serious pressure after years of underachieving, Clay Helton has a chance to deliver a perfect campaign and his second Pac-12 title after also winning in 2017.

Mario Cristobal is 24-9 with the Ducks since taking over in the 2017 Las Vegas Bowl but his team will at best have as many losses as all of last season through 14 games with Oregon winning the Pac-12 and the Rose Bowl last season with a 12-2 record.

The scoring numbers are quite close for these teams despite the contrasting records as USC is +51 and Oregon is +31 over the small five-game sample. Oregon has had to play three of five games on the road where both narrow losses occurred while USC has also hosted only two games this season.

Neither team had to play the top competition in their division this season as USC had to cancel its game with Colorado while Washington cancelled last week’s game with Oregon.

Typically this game has been played in a neutral site in recent years with the past six games in Santa Clara while the first three Pac-12 titles games from 2011-2013 were hosted by the top seeded school, including Oregon winning the initial Pac-12 title game at home in 2011 vs. UCLA. Those hosts won two of the three Pac-12 Championship games.

Oregon originally was slated to play Colorado in Los Angeles as the Pac-12 prepared for the possibility that Washington would not be able to play after the Huskies had to cancel a division title deciding game with Oregon last week.

While the Ducks are catching favorable circumstances to be in this game, they were set to be a six-point favorite hosting Washington last week before the game was cancelled, as odds are they would have earned this opportunity if they had been given the chance.

With a 3-0 start Oregon looked like the best hope for the Pac-12 to crash the national scene and emerge as a College Football Playoff candidate.

Oregon is the only Pac-12 team to have won a college football playoff game as a finalist in the initial season of the format, winning handily over Florida State in its semifinal before falling to Ohio State.

Oregon wasn’t far from being in that conversation last season but a tough luck loss in the opener to Auburn likely knocked them out of consideration. Led by likely NFL rookie of the year Justin Herbert the Ducks finished 12-2 with the only Pac-12 loss at Arizona State.

Oregon dominated Utah in the Pac-12 Championship and also got by Wisconsin with some good turnover bounces in the Rose Bowl for a successful campaign, finishing #5 in the national polls.

Replacing Herbert was set to be a challenge and sophomore Tyler Shough emerged as the choice to lead the Ducks. Shough threw for three garbage time touchdowns last season while appearing in four games and has the size and mobility to excel in this system.

He has posted solid season numbers but did have two costly interceptions in the loss to Oregon State while also had his worst numbers in the loss to California over his past two games. He has averaged over 50 rushing yards per game on 4.9 yards per carry in addition to the passing results.

Oregon as usual has been a successful rushing team posting nearly 1,000 yards on 5.3 yards per carry. A 1,000 yard rusher the past two seasons, C.J. Verdell has fallen behind Travis Dye in the offense as the Ducks share the ball between those juniors in the backfield as they did last season.

The passing game has been less consistent than with Herbert and the Ducks also lost assistant coach and last year’s offensive coordinator Marcus Arroyo who took the UNLV job.

The new offensive coordinator is former Mississippi State head coach Joe Moorhead who has maintained last season’s pace, actually improving to 7.1 yards per play this season after averaging 6.2 yards per play last season, eighth nationally though this year’s numbers are a bit skewed with the shorter and unconventional schedules for many teams.

Oregon is 1.0 yards per play worse on defense this season compared with last season however as last year’s team had a very good defense by Oregon’s standards, understanding that pace of play and offensive success of the Ducks prohibits Oregon from typically posting elite defensive numbers.

Oregon was dramatically outrushed in games vs. UCLA and Oregon State for surprise outcomes and the Ducks have allowed almost 420 yards per game despite a schedule that featured a lot of inexperienced quarterbacks. Add that Oregon faced backup quarterbacks in the wins over Stanford and UCLA and there should be concerns about containing USC’s effective passing game. 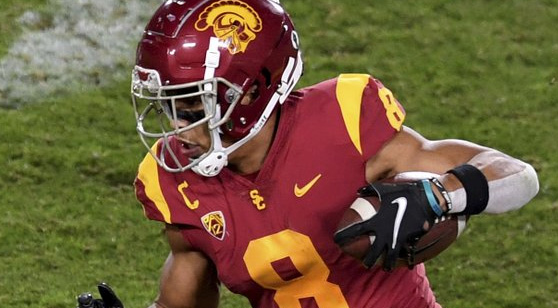 The USC Trojans closed the season with three straight covers while posting a 5-0 overall record in their five game season. (AP)

In a critical season for his future at USC, Helton has delivered only wins so far.