The Oklahoma Sooners will square off with the Iowa State Cyclones in the Big 12 Championship Game and while it's a long shot that the winner will make this year's College Football Playoff, this is expected to be one of the tightest conference championships on tap this weekend according to the oddsmakers.

How to Handicap Big 12 Championship

The Sooners roll into this one with six victories in a row since their last loss on Oct. 3. That last loss was against these same Cyclones, a 37-30 win at Jack Trice Stadium in Ames. That game really lit a fire under Oklahoma, as they won their final six regular-season games, they covered five of those outings, and they won each game by at least eight points.

The Sooners are averaging 46.3 points per game during their six-game winning streak, and the defense has allowed just 15.6 PPG over the previous five outings. If not for those first two losses against Iowa State and Kansas State, this team might have been playoff material.

The Cyclones are on quite the roll themselves, going for five wins in a row while covering four of the outings. Their last loss came Oct. 24 at Oklahoma State, a narrow 24-21 setback in Stillwater as 2.5-point underdogs. It seems so long ago that Iowa State suffered a 31-14 loss at home against Louisiana back on Sept. 12.

Oklahoma has appeared in each of the past three Big 12 championship games since its resumption in 2017, winning each of the outings by a 43.3 to 22.3 margin against Baylor, Texas and TCU in this very venue. The Sooners have made themselves right at home at Jerry World, so the comfort level for OU will be big.

Iowa State is making its first appearance in the Big 12 title game.

Oklahoma won’t have a Heisman Trophy winner for the second consecutive season, but for the fourth straight year they have had a productive performer under center.

Quarterback Spencer Rattler completed 68.5 percent of his passes for 2,512 yards, 24 touchdowns and seven interceptions across his nine games while also rushing for 103 yards and four more scores.

Rattler wasn’t the only fabulous option on offense, however, running backs T.J. Pledger and Rhamondre Stevenson were the top two dogs in the backfield. Pledger led the team with 449 rushing yards and five touchdowns while averaging 4.8 yards per tote in eight games, while Stevenson led the club with six rushing scores in just four games while posting 382 yards and 5.9 yards per carry.

On the receiving end of things, wide receiver Marvin Mims registered 482 yards with a team-best seven touchdowns, while WR Theo Wease added 467 yards and three scores. Those are the two to watch when Rattler is firing the ball down the field, and RB Jeremiah Hall has five scores with his soft hands out of the backfield, too.

On defense, linebacker Brian Asamoah led the way with 29 total stops in his nine games, forcing a fumble and registering 1.5 sacks. Speaking of sacks, that’s defensive end Isaiah Thomas’ specialty, as he got to the quarterback 7.5 times in his nine games with 17 solo stops.

The Sooners allowed just 89.2 rushing yards per game to rank fourth in the country, while yielding just 323.4 total yards per contest to check in 17th. 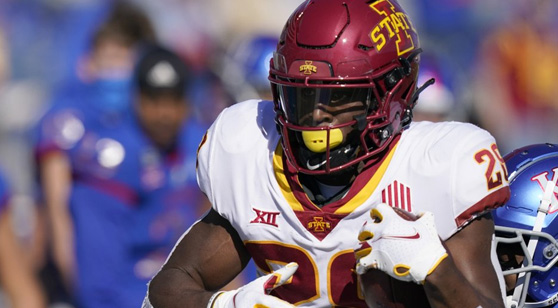 Iowa State QB Brock Purdy might not have been as productive as in the past, but he was no slouch this season, either. He ended up with 2,272 passing yards, 17 touchdowns and six interceptions across his 10 regular-season games while completing 66.2 percent of his attempts.

He also rushed for 310 yards and four scores, second on the team in rushing yardage overall. While he won’t be confused with the great dual-threat options of the day, he isn’t bad when he needs to pull it down and run.

The Cyclones leave the main ball carrying to RB Breece Hall, however. He rolled up 1,357 yards on the ground, gobbling up 6.1 yards every time he ran the ball, and he ended up with an eye-popping 17 touchdowns on the ground. Hall also added 18 catches with 144 yards and two touchdowns, so the Oklahoma defense will key on Breece first and foremost.

They didn’t do a good job in Ames, as Hall racked up 139 yards and two touchdowns on the ground in that upset back in early October.

Purdy’s top targets in the pass game are WR Xavier Hutchinson and TE Charlie Kolar. Hutchinson easily led the team with 50 catches and 612 yards while finding the end zone four times, while Kolar had 33 grabs for 446 yards and five scores, and his 13.5 yards per reception were impressive for a tight end.

Iowa State’s big defensive stud is DE Will McDonald IV, as he rolled up 8.5 sacks with 14 total stops and two forced fumbles with a pass defended.

LB Mike Rose was good for a team-best 45 tackles while posting four interceptions and 1.5 sacks.

Oklahoma has dominated this series, going 76-7-2 in 85 all-time matchups, although Iowa State has picked up wins in two of the previous four.

The past nine meetings have seen a combined total of at least 55 points, so offense reigns supreme when the Sooners and Cyclones hit the field together.

The Cyclones won 37-30 on Oct. 3 in the first meeting in Ames. It was a seesaw affair, which saw Oklahoma fire out to a 17-6 lead in the second quarter before Iowa State closed it up.

The Cyclones didn’t take their first lead until Hutchinson hauled in a 65-yard touchdown with 1:18 to go in the third quarter, going up 23-20.

The Sooners took the lead back on a Rattler to Hall connection from three yards out, but Purdy ran for six midway through the final quarter to tie it up, and Hall capped it off with an 8-yard run to make it 37-30.

-- The Cyclones have also covered five straight against the Sooners, with the Over going 4-0 in the past four meetings.