Coastal Carolina has had a season for the ages.

Head coach Jamey Chadwell led the Chanticleers to not only their first winning season as an FBS program, but their first unbeaten season too.

They hosted College Gameday and became the talk of the college football world with their quirky uniforms, field, and nickname.

They will look to cap off their year with a win in the Cure Bowl against the team they were originally supposed to face with College Gameday in attendance, the Liberty Flames.

How to Handicap Liberty vs. Coastal Carolina

He went 8-5 with Liberty last year and took the Flames to a 9-1 record in just their third season in the FBS.

Liberty knocked off two ACC teams in Virginia Tech and Syracuse, beating the former 38-35 as a 17-point underdog in early November and the latter 38-21 as a field goal favorite three weeks prior.

The Flames hopes for an unbeaten season came to an end with a rough 15-14 loss to North Carolina State at the end of November.

Liberty was a four-point underdog in that game, so the Flames ended up covering for the seventh straight time, but it was still a disappointing result.

The Flames were scheduled to face the Chanticleers on December 5, but they had to pull out of that game due to a COVID outbreak, leading to BYU playing Coastal Carolina on a few days’ notice.

Coastal Carolina wasn’t able to play in the Sun Belt Championship against Louisiana last week as a COVID outbreak decimated at least one of the team’s position groups. The Chanticleers’ entire defensive coaching staff could not return to the team until the middle of the week due to testing and contact tracing.

The Chants were 9-0 SU and 8-0-1 ATS against FBS opponents prior to their regular season finale against Troy. Coastal Carolina’s perfect season almost came to an end as the Trojans scored two touchdowns in the final three minutes to take a 38-35 lead.

However, Grayson McCall found Jaivon Heiligh for a 23-yard touchdown with 35 seconds remaining to give Coastal Carolina a 42-38 win.

Malik Willis had a fantastic season running this offense. It was believed the Flames would miss Stephen Calvert, but Willis proved to be even better under center.

He completed 64 percent of his passes for 2,040 yards (8.6 YPA) with 20 touchdowns and four interceptions. Willis is an exceptional runner as well, running for 915 yards (8.5 YPC) and 10 touchdowns if you exclude sack yardage.

His play has made Liberty one of the most efficient offenses in the country. The Flames are averaging 37.1 PPG and 480.6 YPG, largely thanks to a ground game that is churning out 5.6 YPC and 252.1 YPG.

Joshua Mack, Peytton Pickett, and Shedro Louis are all averaging at least 5.5 YPC this season, and they all have fresh legs since they split the workload.

D.J. Stubbs is the leading receiver with 33 receptions for 455 yards and three touchdowns, while Kevin Shaa is the big play threat averaging 18.9 YPR with four touchdowns.

Demario Douglas is the only other player on the Flames with more than 20 receptions, averaging 11.6 YPR with three touchdowns.

The Flames don’t have a good kicking game. Alex Barbir is 4-11 from 30 yards or longer, so Liberty can’t rely on points unless they get in the red zone.

This defense is allowing 21.4 PPG and 310.4 YPG, but the Flames haven’t played a lot of good offenses. Their run defense has been a little suspect, allowing 4.2 YPC, and that’s not a good sign heading into a game with Coastal Carolina.

Standout linebacker Anthony Butler is questionable to take part in this game.

The Chants are one of the most run-heavy teams in the FBS.

Quarterback Grayson McCall is the second-leading rusher with 473 yards (4.9 YPC) and six touchdowns, while Reese White (468 yards with 5.6 YPC) and Shermari Jones (377 yards with 4.8 YPC) will also see action.

McCall was the wildcard coming into this season as a redshirt freshman, but he has surpassed all expectations. He is completing 69.3 percent of his passes for 10.0 YPA with 23 touchdowns and two interceptions. McCall has only been sacked nine times as this offensive line has done a stellar job of keeping his jersey clean.

Jaivon Heiligh is the top receiver on the Chanticleers with 52 receptions for 820 yards and 10 touchdowns. Heiligh has twice as many receptions as the next leading receiver, so the Flames will have to concentrate on him.

Isaiah Likely is a surprising big play threat for a tight end with 25 receptions for 517 yards and four touchdowns, and Kameron Brown (15.3 YPR) and Sam Denmark (17.8 YPR) are deep threats too.

Coastal Carolina has been solid on defense throughout the 2020 season.

The Chanticleers are allowing 18.5 PPG and 340.6 YPG, ranking in the top 25 nationally in both categories. Additionally, they are one of the top havoc teams in the country per Bill Connelly’s SP+ metrics.

We don’t know how many players (or who) have been affected by COVID-19 though, so the Chants may be without some starters on this side of the ball on Saturday. 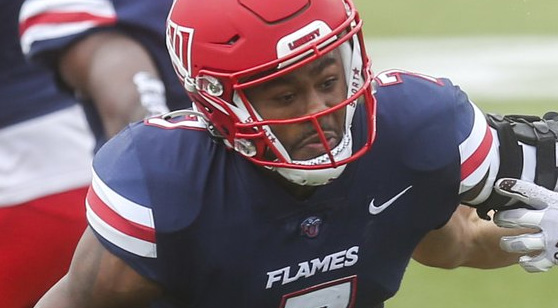 Quarterback Malik Willis and the Liberty Flames have been a great investment as underdogs this season. (AP)

This will be the first meeting between these two teams as FBS opponents. Liberty and Coastal Carolina squared off at the FCS level every year from 2003 to 2016 though, and the all-time series is tied at seven wins apiece.

Coastal Carolina hammered Liberty 42-7 in their last meeting. Turner Gill was suspended due to an NCAA rules violation, and the Flames finished the game with negative rushing yards in the blowout loss.