The Oklahoma State Cowboys (7-3, 6-3 Big 12) will square off with the Miami Hurricanes (8-2, 7-2 ACC) in the Cheez-It Bowl on Tuesday from Orlando as the College Football Bowl Season continues.

How to Handicap Oklahoma State vs. Miami

The Cowboys righted the ship in the regular-season finale, smoking Baylor in Waco by a 42-3 count to easily cover a six-point number on the road. It snapped an ugly 0-5 ATS run which extended from Oct. 31 to Dec. 5.

Oklahoma State opened the season with a 16-7 win over Tulsa, which looked like a shocker at the time. They were favored by 24 points, and struggled offensively. But in retrospect, it was a decent showing with a nine-point win over a bowl team. Oklahoma State actually started 4-0 SU, and covered the next three after that Tulsa win.

The Cowboys fell at home against Texas on Oct. 31, losing 41-34 in overtime as 3.5-point favorites. They followed that up with another narrow win, a 20-18 win over Kansas State in Manhattan, before getting bounced around 41-13 against Oklahoma in their Bedlam rivalry game. In five games away from home this season the Cowboys managed to cover just twice while the ‘under’ connected in four of those outings.

The Hurricanes didn’t end up where they wanted, although it wasn’t a failure of a season in head coach Manny Diaz’s second season.

Miami picked up wins and covers against UAB, Louisville and Florida State in the first three games, with the highlight being a 52-10 beatdown of the rival Seminoles on Sept. 26. The first loss came at the hands of Clemson on the road, losing 42-17 as 14-point underdogs on Oct. 10.

Quarterback D’Eriq King was able to help his team bounce back with a win over Pittsburgh on Oct. 17, and they topped Virginia 19-14 in an ugly win as 13.5-point favorites. The offense was hitting on all cylinders on Nov. 6, a Friday night at NC State, and they needed every one of the points with a 44-41 win in Raleigh. They pushed their road winning streak to three with a 25-24 win over Virginia Tech and a 48-0 blasting of Duke on Dec. 5.

The Canes were blasted 62-26 at home against North Carolina in the regular-season finale on Dec. 12, allowing a school record in points as they closed the season on a low note.

Miami’s defense struggled at times, coughing up 407.4 total yards per game to rank 65th, while allowing 226.8 passing yards per game and a dismal 180.6 rushing yards per contest. They were a bend but don’t break D, yielding 26.0 PPG, which was good for 46th in the nation.

Miami enters this game as an underdog, and they were 1-1 SU/ATS as a ‘dog this season. As a ‘dog they averaged 23.0 PPG, while allowing 33.0 PPG, and the ‘under’ came through in each of those outings.

The Hurricanes have posted a solid 4-1 ATS mark in the past five as an underdog, however, although they’re just 1-4 ATS in the previous five neutral-site games as a ‘dog. It will be interesting to see how they respond after getting bludgeoned for 62 points in the final. They were supposed to play Georgia Tech, but COVID-19 wiped that game out. Miami is an impressive 6-0 ATS in the past six games after allowing more than 40 points in their previous outing.

This was Miami’s first season using the spread offense, and the results were mostly good. King threw for 2,570 yards with 22 touchdowns and just five interceptions, and he ran for 520 yards and four more scores.

Running back Cam’Ron Harris was good for a team-best 579 yards and nine touchdowns, and RB Don Chaney Jr. ended up being a decent secondary option with 272 yards and three scores.

RB Jaylan Knighton helps them go three-deep in the backfield, as he has 209 yards and a touchdown across his nine games. Wide receiver Mike Harley is the downfield threat with 730 receiving yards and six scores.

And on defense, it was all about Jaelan Phillips, who led the team with eight sacks, but he opted out to prepare for the 2021 NFL Draft, and Quincy Roche, who ended up with 4.5 sacks, is out as well for the same reasons. 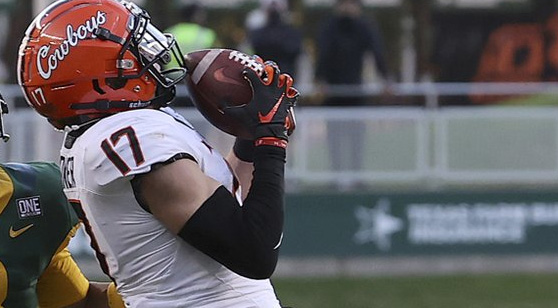 WR Dillon Stoner and the passing offense of Oklahoma State could be a tough matchup for Miami in the Cheez-It Bowl. (AP)

The Cowboys ranked 40th in the country with 427.0 total yards of offense per game, while ranking 60th with 232.5 passing yards per contest. As you would expect, OSU’s strength was on the ground, rolling up 194.5 rushing yards per game to rank 37th overall.

RB Chuba Hubbard registered a team-leading 625 rushing yards and five touchdowns across seven games, but he opted out before the Baylor game on Dec. 12 to prepare for the 2021 NFL Draft and keep himself healthy.

RB Dominic Richardson banged out a career-high 169 yards and three touchdowns against Baylor in Hubbard’s stead, but he’ll likely get a much bigger test from the Hurricanes.

QB Spencer Sanders threw for 347 yards and three touchdowns in his finest performance against Baylor, jelling nicely with WR Dillon Stoner for all three of the scores.

WR Tylan Wallace (knee) is questionable to play, but his addition would be huge for the Cowboys, as the look to close out on a high note.

Oklahoma State was just 1-4 ATS in their past five games as a favorite, while hitting the ‘under’ in four of their final five games of the season.

This is just the second all-time meeting between these teams. Miami pounded Oklahoma State on Oct. 5, 1991 by a 40-3 score at the old Orange Bowl in downtown Miami during their national title run.

The Cowboys lost to Texas A&M in the Texas Bowl last season, 24-21, snapping a three-game win streak in the postseason. The last time the Cowboys faced an ACC team in a bowl game was 2017 in the Camping World Bowl in this same stadium, rolling to a 30-21 win.

The Hurricanes have had a difficult time in bowl games lately, losing three straight while going 1-9 SU across the past 10. Their only win during the span was a 31-14 win over West Virginia in the Russell Athletic Bowl on Dec. 28, 2016, their last matchup against a Big 12 team in a bowl game.

Miami was blanked 14-0 in the Independence Bowl last season against Louisiana Tech.

Oklahoma State has covered four straight bowl games, and they’re 14-3 ATS in the past 17 non-conference tilts.

Miami is 2-10 ATS in the past 12 neutral-site games, and 1-8 ATS in the previous nine bowl appearances.

The ‘under’ is 6-1 in the past seven bowl games for the Hurricanes, too.