The San Jose State Spartans have had their best season since 1939.

This program just won its first conference title in 29 years, leading to a long-term contract extension for Brent Brennan.

Brennan has a chance to lead the Spartans to their first undefeated season since World War II on New Year’s Eve when they face the Ball State Cardinals in the Arizona Bowl.

How to Handicap San Jose State vs. Ball State

The Spartans were one of the best teams to bet on in college football this year.

San Jose State went 6-0-1 ATS and moneyline bettors were joyous as they won four games outright despite being an underdog. This team was an underdog of six points or more against Air Force, San Diego State, and Boise State, and the Spartans reverse covered all those games.

San Jose State was not supposed to beat Boise State, but the Spartans lit up the Broncos’ defense. They almost cracked 500 yards of offense, as Nick Starkel shined. Starkel completed 32 of 52 passes for 453 yards and three touchdowns. Boise State’s ground game went nowhere as the Broncos could only muster 224 total yards on the evening.

The Cardinals were supposed to be the final stepping stone for the Bulls on their way to an unbeaten season, but they had other plans. Ball State used a 28-point second quarter to take an insurmountable lead, holding off Jaret Patterson and Buffalo.

It was the fourth straight cover and sixth consecutive victory for the Cardinals. They lost their season opener to Miami (Ohio), but they won their next six games to make it here. Four of those wins were by one score or less though, leading to Ball State being a sizable underdog on Thursday.

The third time turned out to be the charm for quarterback Nick Starkel.

Starkel started his collegiate career at Texas A&M and transferred to Arkansas before finding a home at San Jose State. He wasn’t too successful at either stop after a promising freshman season in College Station in 2017, leading to one last chance with the Spartans.

His decision to come to San Jose State turned out great as he has completed 65.1 percent of his passes for over 1,900 yards (9.0 YPA) with 16 touchdowns and four interceptions. Starkel announced that he was returning to school for one more year in 2021, potentially making the Spartans the favorite to repeat.

Running back Tyler Nevens is the team’s leading rusher with 478 yards (8.1 YPC) and five touchdowns. Most of that production came against Nevada and Hawaii, as Nevens had 28 carries for 336 yards and three scores in those two games.

Kairee Robinson has toted the rock more than anyone else on the roster and has 285 yards (3.9 YPC) this year. Back-up QB Nick Nash comes in a few times a game in select packages and is a dangerous runner with 195 yards (5.4 YPC) this year.

Bailey Gaither and Tre Walker are the two stars in the receiving game.

Gaither was a First Team All-MWC selection, finishing second in the conference in receiving yards. He caught 41 passes for 725 yards and four touchdowns this season alongside Walker. Walker shined in the conference championship game with seven catches for 137 yards and a touchdown to outduel Khalil Shakir.

This defense is superb, led by MWC Defensive Player of the Year Cade Hall.

Hall had 10 sacks as an interior defensive lineman in seven games. He made the Spartans one of the most fearsome defensive lines in the nation alongside Viliami Fehoko.

RB Caleb Huntley opted out of the MAC Championship Game in order to focus on the NFL Draft after running wild in Ball State’s first three games.

Huntley ran for 437 yards (5.5 YPC) and six touchdowns in Ball State’s first three games before suffering an undisclosed injury. Rather than return against Buffalo, he decided not to risk further injury, so he will be unavailable for this game too. Tye Evans has played well in his place though with 344 yards (4.6 YPC).

Offensive linemen Luke Martin and Kevin Meeder are going to miss this game.

That will make life more difficult for Drew Plitt under center. Plitt is completing 65.8 percent of his passes for almost 2,000 yards (8.4 YPA) with 16 touchdowns and six interceptions this year. The senior has looked sharp the last two years for the Cardinals, and he has a ton of experience that will keep him from being overwhelmed.

There are a trio of talented receivers that are responsible for more than 80 percent of Plitt’s passing yards.

Justin Hall, Yoheinz Tyler, and Antwan Davis have all had their turn in the spotlight for Ball State in 2020. Hall has been the most dangerous player consistently with 49 receptions for 665 yards and four touchdowns along with 231 rushing yards on 7.7 YPC.

Tyler thrived against Buffalo in the MAC Championship Game with six receptions for 91 yards and a score, while Davis has at least 65 receiving yards in four games.

Most MAC quarterbacks haven’t been able to fully take advantage of this shortcoming, but Starkel and the Spartans have the ability. 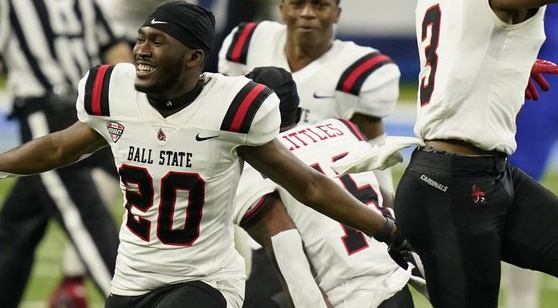 Ball State enters this bowl matchup with confidence after upsetting Buffalo in the MAC Championship. (AP)

This is the first meeting between these two teams.

-- Ball State has covered seven straight games as an underdog

-- Cards won and covered last four in 2020 after dropping 5 of previous six vs. spread

-- The under has cashed in five straight San Jose State games

-- The Cardinals last appearance came in 2014, losing a 23-20 decision to Arkansas State in the GoDaddy Bowl

-- The Spartans have won their last four bowl matchups, the most recent outcome in the 2015 Cure Bowl