The Northwestern Wildcats bounced back from a dismal 2019 campaign to make the Big Ten Championship Game in 2020.

It was the second time Pat Fitzgerald led this team to Indianapolis in the last three years, but the Wildcats fell short against the Ohio State Buckeyes once again.

Their successful regular season led to a berth in the Citrus Bowl though where the Wildcats will face the Auburn Tigers as Northwestern tries to win its fourth straight bowl game.

How to Handicap Auburn vs. Northwestern

Defensive coordinator Kevin Steele will be the head coach for this game as Bryan Harsin won’t lead Auburn against Northwestern.

Harsin was hired from Boise State to replace the deposed Gus Malzahn after Malzahn was sacked despite finishing the season with a 24-10 win over Mississippi State that many believed ensured he would be back for one more year.

Three of Auburn’s four losses were against top ten teams. The Tigers lost by double digits to Georgia, Alabama, and Texas A&M, and they were underdogs in all three of those games. The only game Auburn lost as a favorite was back in mid-October when the Tigers lost to South Carolina 30-22 as a field goal road favorite.

Northwestern was one of the top teams to bet on in 2020. The Wildcats only failed to cover the spread once, losing their unbeaten season in a disastrous 29-20 loss to Michigan State. This team was solid aside from that defeat, riding the defense to a 6-1-1 ATS record.

The Wildcats gave Ohio State a scare in the Big Ten Championship Game.

Quarterback Justin Fields had his worst game of the season, completing under 50 percent of his passes for 114 yards with two interceptions against this defense, and Northwestern led 10-6 at halftime.

However, the offense didn’t have much success moving the ball, leading to the Buckeyes breaking through with the ground game in the second half for a 22-10 win. 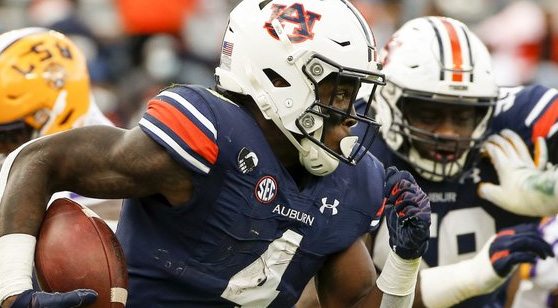 Auburn could be leaning on RB Tank Bigsby on Friday as Northwestern looked suspect versus the run in its last game. (AP)

QB Bo Nix had an up and down sophomore season leading the Auburn offense.

He had some great performances in wins over Kentucky and LSU, but he did not play well in Auburn’s four losses.

In those games, he went a combined 83 for 148 for 820 yards with one touchdown and six interceptions. Nix ended the season on a low note with poor performances against Alabama, Texas A&M, and Mississippi State.

Freshman RB Tank Bigsby has had a breakout season for the Tigers. He had a monster game against Mississippi State in the regular season finale with 26 carries for 192 yards, and he wasted little time establishing himself as Auburn’s go-to running back.

Bigsby has 834 yards (6.0 YPC) and five touchdowns this year, but he is not much of a receiving threat out of the backfield as Auburn rarely targets back in the passing game. Nix ranks second on the time in rushing with 78 carries for 465 yards for seven touchdowns once sacks are removed.

WR Anthony Schwartz won’t play in this game due to an undisclosed injury, depriving Auburn of one of its best targets in the passing game. The Tigers will ask more of Seth Williams and Eli Stove in his absence.

Auburn didn’t have a great defense this season.

This secondary could be in trouble in the Citrus Bowl as Devan Barrett, Jamien Sherwood, and Christian Tutt are all going to miss the game.

Northwestern had the worst offense of any ranked team this season. The Wildcats could only muster 23.4 PPG and 348.6 YPG, and their 4.6 yards per play average ranked 110th in the nation.

Peyton Ramsey is completing 59.9 percent of his passes this year for 5.8 YPA with nine touchdowns and eight interceptions.

The Indiana transfer is dinking and dunking a lot, as this offense has not been able to move the ball well through the air. He has yet to throw for more than 225 yards in a game all year, so Ramsey is unlikely to take full advantage of Auburn’s thin secondary.

Drake Anderson and Isaiah Bowser both entered the transfer portal, clearing the way for freshman Cam Porter to be the No. 1 back for Northwestern in this game.

Porter ran for 235 yards (4.9 YPC) and four touchdowns in this offense, supplanting Anderson and Bowser as the top back in this offense over the last two games.

Fifth-year senior Ramaud Chiaokhiao-Bowman has been Ramsey’s top target all year. He has 38 receptions for 447 yards and four touchdowns, and he is likely to see even more action than usual after Kyric McGowan entered the transfer portal last week.

The Wildcats have been superb on defense in 2020, fueling their success.

Northwestern is allowing 15.5 PPG and 338.8 YPG, and the pass defense ranks first in the country, conceding just 5.0 YPA.

Defensive lineman Eku Leota won’t play after entering the transfer portal though, and there is a litany of players on the injury report.

The only other time that Auburn and Northwestern met on the field was on New Year’s Day too. These teams met in the 2010 Outback Bowl with the Tigers edging the Wildcats 38-35. Northwestern had 621 total yards of offense in that game, but Mike Kafka threw five interceptions.

-- The under is 7-1 in Northwestern games this year