The Cincinnati Bearcats might have the chance to follow in the footsteps of the UCF Knights. UCF knocked off Auburn in the Peach Bowl three years ago to claim a share of the national championship.

Cincinnati might have the opportunity to do the same thing with a win over the Georgia Bulldogs on New Year’s Day depending on the results of the College Football Playoff.

How to Handicap Georgia vs. Cincinnati

The Bearcats won their first undisputed AAC championship this season.

Cincinnati needed to overcome an early 14-3 deficit to knock off UCF 36-33 in order to keep its undefeated season alive. The Bearcats’ next two games were canceled though, and they looked a little rusty against Tulsa in the AAC Championship Game a month later. Tulsa tied the game at 24 apiece late before Desmond Ridder led Cincinnati down the field for a game-winning Cole Smith field goal as time expired.

It was a disappointing season for Georgia.

The preseason SEC East favorites were hammered 41-24 by Alabama in mid-October, and they lost 44-28 to rival Florida in the World’s Largest Outdoor Cocktail Party.

Their defense was largely exceptional aside from those two games though, leading to a 7-2 record.

The Bulldogs ended the regular season with a bang, hammering South Carolina and Missouri in their last two games. Georgia took a 21-0 first quarter lead on South Carolina on its way to a 45-16 victory, and UGA found the end zone five times in a 16-minute span in a 49-14 drubbing of Missouri.

The big question for Georgia this season revolves around why the Bulldogs waited so long to play USC transfer J.T. Daniels.

He has proven to be a much better quarterback than D’Wan Mathis or Stetson Bennett IV, but the sophomore didn’t take the field until the Mississippi State game in late November. Daniels has completed 66.7 percent of his passes for 839 yards (10.4 YPA) with nine touchdowns and one interception.

James Cook announced that he would not be playing in the Peach Bowl on Wednesday after news broke his father passed away.

Kendall Milton is questionable due to a knee injury, but Georgia has a lot of talent at running back. Zamir White has been the Bulldogs’ No. 1 running back all year with 740 yards (5.6 YPC) and 10 touchdowns, while Kenny Mcintosh (5.6 YPC) and Daijun Edwards (5.9 YPC) are nice change of pace backs.

Standout offensive lineman Ben Cleveland will miss the game as he prepares for the NFL Draft though.

Georgia will have its top three receivers available, including the extremely talented George Pickens. Pickens was fantastic against Missouri with five receptions for 126 yards and two touchdowns, and he might finally reach his potential now that Daniels is under center.

Kearis Jackson and Jermaine Burton have been dangerous at times this season too.

The Bulldogs have been built on defense under head coach Kirby Smart.

Georgia has the No. 1 ranked defense nationally per SP+, and this front seven is allowing an FBS low 2.3 YPC and 69.3 YPG on the ground.

There were fears that star linebacker Azeez Olujari would sit out the bowl game to declare early for the NFL Draft, but he will play as this is not like last year’s Sugar Bowl where over a dozen Georgia players sat out. 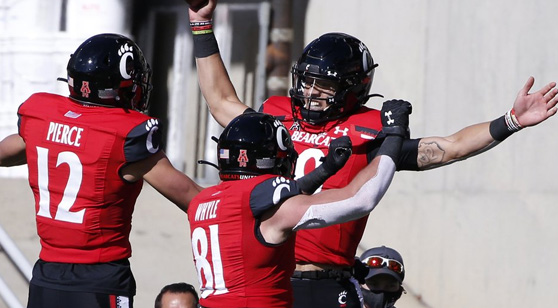 QB Desmond Ridder and the Bearcats will be looking to close their season with a perfect 10-0 record on Friday. (AP)

Ridder was named AAC Offensive Player of the Year this season. He was in danger of being benched last year, but Ridder had his best season with the Bearcats in 2020.

The junior quarterback has completed 66.4 percent of his passes for 2,090 yards (8.6 YPA) with 17 touchdowns and six interceptions. Additionally, Ridder is the second leading rusher on the Bearcats with 609 yards (7.3 YPC) and 12 touchdowns.

Leading rusher Gerrid Doaks is dealing with a leg injury and is considered questionable to take the field against Georgia in the Peach Bowl.

However, Doaks told the media that he has recovered from the injury he suffered against Tulsa and will play. Doaks has run for 673 yards (4.7 YPC) and seven touchdowns this season.

If he can’t play, freshman Jerome Ford has been a solid option with 386 yards (5.9 YPC) and seven scores. That has helped make this one of the best ground games in the country, averaging 5.6 YPC and 218.6 YPG on the ground.

There isn’t one favored target in the passing game.

Cincinnati has six players with at least 200 receiving yards, but the leading receiver is tight end Josh Whyle with just 25 receptions for 318 yards and five touchdowns. That led to Whyle being named Second Team All-AAC along with receiver Michael Young Jr.

This defense has played at an elite level throughout the 2020 season.

Cincinnati is allowing just 15.5 PPG and 309.6 YPG, and the Bearcats rank first in the nation with 4.1 yards per play.

Opponents are averaging just 3.3 YPC and 5.5 YPA although the AAC has some of the top offenses in the country. That led to five Bearcats being named First Team All-AAC including three defensive backs (Coby Bryant, Ahmad Gardner, and James Wiggins).

These teams have only met once before. Georgia and Cincinnati played in 1976 with the Bulldogs winning 31-17.

-- The over has cashed in four straight Georgia games

-- Cincinnati has covered four straight games as an underdog