Indiana was one of the most surprising teams in college football last season. The Hoosiers went 6-1 in Big Ten play with their lone loss coming by just a touchdown to Ohio State. They upset Penn State, Michigan, and Wisconsin to be one of the top teams in the conference, and now Tom Allen is out to prove that last year wasn’t a fluke. He’ll have a tough test early as Indiana opens the season on the road against the Iowa Hawkeyes.

Iowa has been one of the most consistent programs in the country under Kirk Ferentz. The Hawkeyes are usually good enough to at least challenge the best teams in the Big Ten, and they can occasionally knock them off. Two early losses knocked them out of the playoff picture last season, but the Hawkeyes closed out the season with six straight wins and hammered Wisconsin by 21 points in their season finale.

The health of Michael Penix Jr. is the biggest X-Factor for Indiana in 2021. Penix was superb for the Hoosiers last season, throwing for 1,645 yards with 14 touchdowns and four interceptions in six games. He almost threw for 500 yards and tossed five touchdowns in a near upset over Ohio State in the Horseshoe, but he has dealt with injuries throughout his collegiate career.

The hosts don’t have a great quarterback. Spencer Petras is a game manager in the fullest sense. He completed just 57.1% of his passes and averaged 6.4 YPA in 2020.

Instead, the Hawkeyes rely on their ground game. Tyler Goodson has the potential to be a 1,500-yard back in 2021 if the offensive line plays well. Center Tyler Linderbaum might be the best player at his position in the country, and left guard Cody Ince is solid, but the other three positions up front will have new starters. 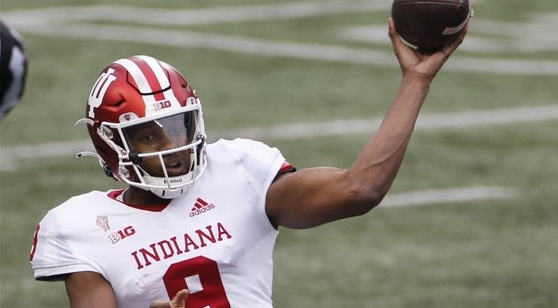 The Indiana Hooisers have covered the spread in eight of their last nine games. (AP)

Bet in Indiana
Bet in Iowa
Other Betting States

This will be one of the lowest scoring games of Week 1. Iowa has a strong defense with not much of an offense, and Indiana has a very underrated defense. Penix will prove to be the difference maker with some big plays though, giving the Hoosiers a win in their season opener.