The Illinois Fighting Illini (1-1) hit the road to meet the Virginia Cavaliers (1-0) at Scott Stadium in Charlottesville for its third game of the season.

The Illini opened the season with an impressive 30-22 victory over the Nebraska Cornhuskers at home, winning outright as 6.5-point underdogs as they kicked off the Bret Bielema era in style. Unfortunately, they hosted a very good Texas-San Antonio Roadrunners team from Conference USA, and they were run over at home. The good news is the Illini hit 30 points yet again, but they allowed 37, as UTSA rolled up 217 yards on the ground and 280 yards through the air. Illinois was error-prone, too, coughing up the ball once via fumble, and three times via interception, going minus-2 in the turnover differential department.

Virginia wasn't tested nearly as much, as they welcomed FCS William & Mary. The Hoos pounded the Cavaliers 43-0, covering a 30.5-point number, as they posted 206 rushing yards and 339 passing yards, while allowing just 183 total yards. They also doubled up William & Mary with 22 first downs to just 11. It might have been even more lopsided if not for a minus-2 turnover differential.

QB Brennan Armstrong threw for 339 yards and two touchdowns, and he should have a field day against an Illinois pass defense which has yielded 256.0 yards per game through the air. Facing Illinois will also give UVA a chance to get the run game going. The run game wasn't bad, led by Iraken Armstead and Wayne Taulapapa, but no one had more than 54 yards. Still, they gobbled up 6.4 rushing yards per attempt, and went deep into the bench with the game out of hand early. This one figures to be much closer, and the offense should be a lot more balanced.

Illinois looks like they have the tools to score plenty of points this season, especially with former Rutgers QB Artur Sitkowski looking good under center in place of the injured QB Brandon Peters (shoulder). But the defense is still God awful, and Virginia will easily handle Illinois in its first road test.

Virginia will get a much bigger test against a Power 5 team than against an FCS opponent. Their offense has been impressive, averaging 30.0 PPG, but their defense has been very poor. UTSA had their way with the Illini last week, and Illinois figures to continue its struggles as they hit the road for the first time this season in front of a hostile crowd.

Virginia has been money at home in recent seasons, covering the past four games as a home favorite and four in a row against non-conference teams, too. They're also an impressive 20-7-1 ATS in the past 28 games at Scott Stadium. Armstrong is a top-notch quarterback capable of putting up over 300 yards and three touchdowns against the Illini, and they have the horses in the backfield to run for big numbers.

Peters has been cleared for contact, but he is unlikely to be ready for this one due to the shoulder ailment he suffered in Week 0 against Nebraska. As such, Illinois will be using their backup quarterback, and that's another good sign that the Hoos should come away with the win and cover. On the other side of the ball, the offensive line for UVA is very good, and the Illini won't be able to get next to Armstrong.

Illinois might be able to hang with Virginia in the first half, but they don't have the depth to go the full 60 minutes. The Illini is actually a good play on the first-half line, as Sitkowski has been surprisingly effective. However, look for Virginia's run game to take over in the final 30 minutes, salting the game away. UTSA ran all over Illinois last week, and Virginia is going to do the same. 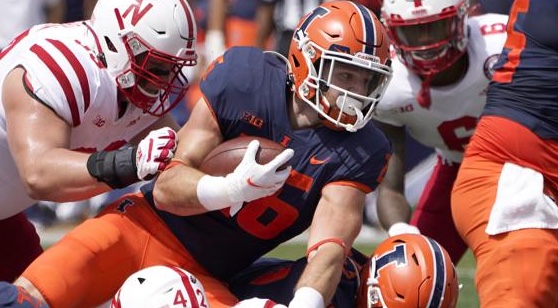