After both of these powerhouses escaped with narrow victories in their respective Week 1 matchups, the Ohio State Buckeyes will host the Oregon Ducks for a heavily anticipated Pac-12 vs Big 10 clash this Saturday afternoon – and FOX has you covered with all the action beginning at noon ET.

After entering halftime of last week trailing Minnesota by four (14-10), Ohio State returned from the midway break with the outlook of a completely rejuvenated squad – as the Buckeyes ended up exploding for 35 points in the second half, which was enough to escape with a two-score victory (45-31).

On the other hand, Oregon also made things look additionally complicated during their opening performance, as the Ducks went into the fourth quarter of last week knotted up with the Fresno State Bulldogs (21-21) – but ultimately prevailed behind a 10-point offensive effort and some gritty, defense in the final stanza (31-24).

I’ll lay the pair of touchdowns with Ohio State here though, as the Buckeyes finally looked like a top-tier squad towards the end of their somewhat nerve-racking win over Fresno State last week – and despite Oregon still nabbing a victory, the Ducks wrapped up Week 1 exhibiting several concerns at both ends for such a highly regarded unit.

After storming out to a 14-point lead in the first quarter last week, Oregon successfully managed to force the Bulldogs’ hand a little early on offense – as Fresno State primarily resorted to the passing game for the remaining three stanzas of the contest.

It turns out though, slinging the ball around the yard was exactly what the doctor ordered from the Bulldogs in regards to stumping Oregon defensively – considering Fresno State quarterback, Jake Haener, carved up the Ducks’ defense for nearly 300 passing yards on 30-of-43 completions over the course of last week’s contest (69.8%).

On the other hand, Ohio State stumbled out of the gate and played a straight-up, bad first half of football to start last week. The Buckeyes bounced back and imposed clear, impeccable dominance over that same, solid Minnesota squad throughout the final two stanzas of the event though – which is why I’m siding with the somewhat undervalued Ohio State squad in Week 2. 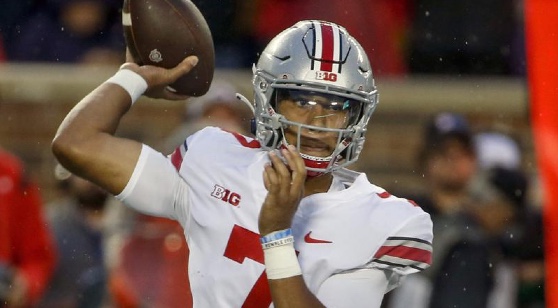