When you put the words “Buffalo Bills” and “playoffs” together right now, it's hard for those failed opportunities in the four straight Super Bowls Buffalo played in during the early 1990's.

But that's something to worry about during Super Bowl week Bills fans, because it's Conference Championship weekend now, and this Bills franchise is 4-1 SU all time in AFC Title games.

Buffalo's got to go through the defending champs to get there though, and it really is a bummer Kansas City quarterback Patrick Mahomes went down last week and comes into this week really banged up. This run of KC winning games outright and not covering the number became absurd a few weeks back, but it continued last week in beating Cleveland.

Fading KC on the point-spread but still seeing the Chiefs win the game has been the result in seven of KC's last eight wins coming into this game, and the lone win (-2.5 vs New Orleans) could have some number discrepancies too.

This SU (Straight Up) win but ATS (Against the Spread) loss run KC has been on, continues to ask the question of how much is it the Chiefs toying with teams and turning the switch on and off, and how much of it is the gap between KC and their competition narrowing.

It's probably been some of both, and maybe both in the same game, for the Chiefs at times, but when you go on a run and win the Super Bowl after trailing by double digits in every playoff game like KC did a year ago, it can be hard to be truly convinced of the consequences until they ultimately happen.

The Chiefs are up against the same season Conference Championship revenge scenario that was tracked back in the NFC Championship piece, and a less than 100% Mahomes, and even a few other wilder scenarios out there against KC, the situation is far from perfect for the Chiefs. Still something that's rarely bothered them before. 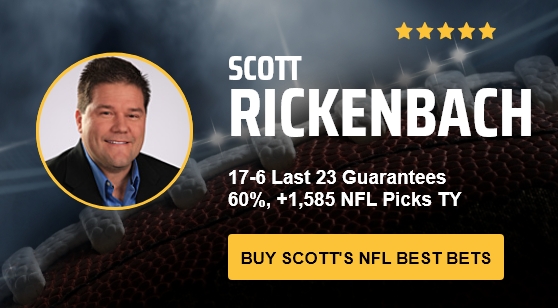 The first meeting was a rather sloppy 26-17 KC win on a Monday afternoon that easily stayed 'under' the number. It was a game that should have been played the previous Thursday but got pushed back as games did this year, and the oddity of the week seemed to bring a rather odd game with it.

Now the fact that these Conference Title game rematches have been strong 'over' plays in recent years (See Table Below) doesn't hurt the 'over' move that's happened for this total.

There is 'under' support regardless, so how good the Mahomes health news gets closer to Sunday could only push it up higher.

Bad news on the health front for Mahomes though and this number could come crashing down as well. Reports are Mahomes should go, but it's still something that could change, and starting the game doesn't necessarily mean finishing the game.

But with the history there for points to be scored, and the offenses definitely there for points to be scored, the argument for the 'over' is going to have my ears a heck of a lot longer than the other side would. Mahomes or not, KC showed in Henne's relief last week that they are still willing to call the game the same as they would with Mahomes in there, and just knowing that brings some interesting counter adjustments in play for both sides.

Cold January nights aren't the most conducive to football games getting the smooth rides they tend to need to clear a total in the 50's like this, but I'm also not interested in sitting on my hands expecting punts and FG's with these two QBs/offenses on the field, heavily based on weather.

The argument for the 'over' is definitely the more interesting one, but ultimately this total isn't one I'm interested in enough to stake an opinion in either option. 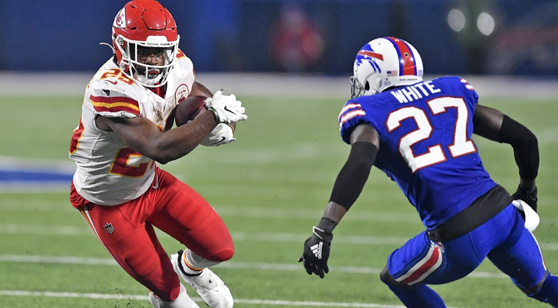 The Chiefs defeated the Bills 26-17 on the road in Week 6, which was the only home loss for Buffalo this season. (AP)

Bills vs. Chiefs
Handicapping the Side

Having done all the back-checking and research I've done throughout the season for various Super Bowl ideas and what not, going into last weekend's action I did already know that if this was going to be the AFC Championship game, it's almost certain I'll land on the Bills.

Historically there has been just too much working against KC this year to repeat, and even recent things like them losing SU in Week 17 (expected, but not the best for future title hopes) and now coming off a playoff game where they won SU and lost ATS AGAIN, but it's a scenario that's been rather detrimental to those teams the next game, at least before Tampa and Buffalo won and covered last week.

The Mahomes situation brought a quick reaction of knowing I'd have to be taking less points with Buffalo than I hoped and still being alright with that, and the Bills can do it.

Conceptually these two teams do quite a bit the same – Buffalo head coach Sean McDermott does come from Andy Reid's coaching tree – so the Bills defense sees plenty of the same concepts on a daily basis.

Mahomes potentially being below his normal self takes away a big part of KC's edge in running those similar schemes, the worrisome thing about KC's SU wins but ATS losses run from a defensive standpoint is that the Chiefs defense can't always get the stops when they need to get the stops. How many games have the Chiefs run out on offense this year during that run?

Keeping the backdoor open once in a while when you're a favorite of more than a TD is one thing, but it's become a very bad habit for this Chiefs team, and Buffalo's the third playoff team that KC has played on this run of going 8-1 SU and 1-8 ATS.

The other two for KC?

Obviously that's not the “ceiling” for KC against playoff teams of a similar caliber, but they maxed out on three-point margins in those games and Buffalo's got an offense that is better than both of those NFC South teams. Who knows how shaky the ground under Mahomes' feet will feel for him, and the Chiefs willingness to play with fire so often with these close finishes (or not good enough to win by margins anymore), has me wanting nothing to do with Kansas City this year. Eventually they are going to get caught with an ATS loss turning into a SU loss as well, and I've got it coming this week.

In my opinion, Buffalo doesn't even need the points.

There have been seven games where the favorite has won but it did not win by enough points to cover the spread.