The Washington Football (6-10) team will travel to MetLife Stadium in East Rutherford, New Jersey to take on the New York Giants (4-12). Kickoff is scheduled for 1:00 p.m. and will broadcast on FOX.

The final meeting between Washington and New York means nothing in terms of affecting the playoff picture, but as a gambling man all games mean something. Washington will look to avoid a five-game losing streak after losing twice to the Eagles and twice to the Cowboys in their most recent four games. This has been a very streaky football team on the season. In the last 12 games Washington lost four straight, won four straight, and have lost four straight headed into this game. If you follow trends, Washington is due for a win.

If I had to guess, the Giants are more than ready to get this season over with. This was not a team that was expected to win the super bowl but the season has been a disappointment to say the least. New York is currently on a five-game losing streak with their most recent loss coming against the Bears, 29-3. Daniel Jones has been out during the entire losing streak, and the Giants have averaged just 9.8 PPG during his absence. Backup Mike Glennon is also out with a wrist injury which means Jake Fromm will get the start. Fromm has seen action in just two games in his career.

New York has simply not been able to find ways to score the football. This should be no different this week, especially after getting blown out by a Chicago team with the same record as Washington. Although Washington has had its own set of problems, they should take care of business and finish off the season with a W. Lay the points with Washington here.

Washington’s second highest scoring game came against the Giants in week two, when they put up 30 points. Their highest scoring game came against the Falcons in week four, a game in which Washington scored 34. Other than those two performances, Washington’s offense ranks middle of the pack compared to the rest of the NFL. On the season they are averaging 323.6 total YPG (20th), 208.9 passing YPG (20th), 114.7 rushing YPG (13th), and 19.6 PPG (22nd). The Football team should be able to find some success in this one as New York’s defense has been terrible.

Washington will look to clean up their defense in the final game of the season as they have allowed 32.5 PPG during their four-game losing streak. Now two of those games were against a high-powered Cowboys offense, but still that average is way too high. On the season Washington has allowed 370.7 total YPG (27th), 265.6 passing YPG (30th), 105.1 rushing YPG (8th), and 26.7 PPG (28th). Washington’s defense should be able to find more success this week against a struggling Giants offense.

The Giants come into this game 0-5 SU and ATS in their last five played. In fact, the last time New York won or covered a game was on November 28th. Going against the recent trend, New York is 5-1 SU and ATS in their last six matchups against Washington. The total has gone under in eight of the Giants last 10 games and 10 of the last 11 home games. New York has not covered a game this year when Jones does not start.

In the past three games the Giants have scored 19 total points with just one touchdown. Saquon Barkley was finally able to rush for 100 yards in a game last week against the Bears, his first time doing so this season. That was the most impressive offensive performance in some time for the Giants. On the season they are averaging 294.2 total YPG (31st), 194.6 passing YPG (28th), 99.6 rushing YPG (26th), and 15.7 PPG (31st). Washington has defended the run quite well this season so Fromm should get a fair number of chances to make something happen through the air.

New York’s defense will look to end the season better than they have been after allowing the Bears to score 29 points last week and the Eagles 34 the previous week. This has been a problem for the Giants all season. The defense is allowing an average of 356.7 total YPG (20th), 233.8 passing YPG (17th), 122.9 rushing YPG (23rd), and 24.6 PPG (23rd). The Giants can’t expect much from the offense so the defense will need to step it up if they want a chance on Sunday. 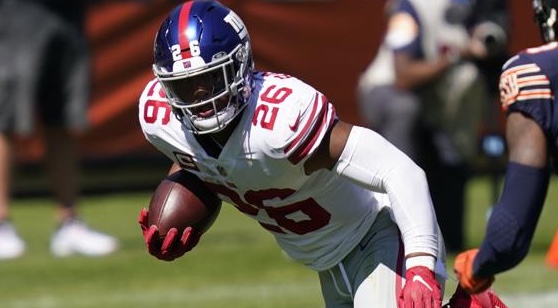 INSIDE THE STATS - WASHINGTON FOOTBALL TEAM

INSIDE THE STATS - NEW YORK GIANTS

Both teams have quite a few players listed as questionable so be sure to keep an eye on the injury list as we get closer to game time. This game should be a low scoring contest, but 38 is too low for me to bet the under. With this being a meaningless final game of the season, we could see some unexpected scoring that could push the total over.

I do like the spread in this one. Washington is a team that leaves it all out there each and every week, regardless if there is anything to play for. Heinicke is about as gritty as they come, and as a bettor I have to side with players like that in meaningless games like this one will be. Taking the road team and backing Washington at –7 in this one.