With four of the seven teams from last year's all-Canadian division staying in the Western Conference, the remaining three Canadian teams – Toronto, Montreal, Ottawa – head back to the Atlantic Division where the likes of Boston, Florida, and Tampa Bay await.

The Atlantic Division will also be one of those nearly impossible occurrences where both Stanley Cup Finalists will be division rivals this year, something that's happened for two years in a row now due to COVID. Montreal isn't expected to duplicate the Cinderella run they had last spring, and various levels of minimal resistance will come from Detroit, Ottawa, and Buffalo in this division as all three of those teams are still a ways away from seriously competing in this league. 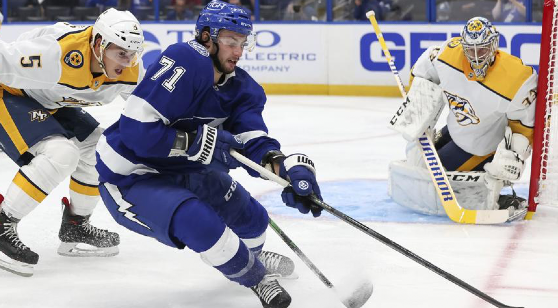 Writing off the bottom half of this division is the first place to start with this futures market, even as that probably sounds a little harsh to Montreal fans. Can't argue against taking a piece of Montreal at +3500 coming into the year if part of that plan is to consider taking other options down the road should Montreal get off to a great start and be in the mix 40+ games into the year.

But I already mentioned how the Panthers are the preferred choice between themselves and Boston given the trajectories I've got both franchises on, and I think the same type of mentality in terms of looking at potentially taking pieces of other options down the line is in play as well.

Toronto and Tampa are definitely deserving of being the two expected to battle it out for this division, but one's off two straight years of playing the maximum amount of hockey any team has in each season, and Toronto still has issues with achieving success. Throw in the added pressure that can get enormous in the Toronto market after a few losses, and chances are there will be better opportunities throughout the year to get on a Leafs division play.

Florida was Top 10 in xGA/60 and Top 5 in xGF/60 last year, a feat that Toronto and Tampa from this division were able to do as well. Yet, it's the Panthers who are double the odds of Tampa here, and that's where price plays into the selection for now. 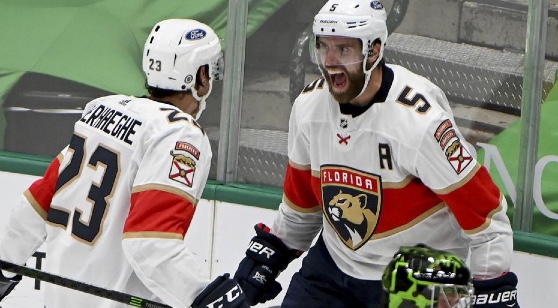 The Florida Panthers expect to have Aaron Ekblad ready to begin the 2021-22 season after last year's injury. (AP)

It's could be tough for any team in the Atlantic Division to count on/expect four playoffs teams in the Eastern Conference to reside here (three guaranteed + one of the two Wildcards) with how deep the Metropolitan Division is once again.

If the thinking is Florida is going to be that third team that challenges that plays above expectation to challenge for a division title etc, it means someone is going to have to take a step back. Boston's still the team I view that's going to take a step back, and should the Lightning lose G Andrei Vasilevskiy or any other key names for significant time, that fatigue from two Stanley Cup runs might show up a bit sooner.

Could easily be wrong here with grading the depth of the Metro, but with Washington, Pittsburgh, Carolina, both New York teams, and Philadelphia all laying chalk on the “Yes” part of the Playoffs prop, getting at least four of those six in the playoffs is rather realistic.
Only four teams from the Metro and the Atlantic playing out in some form as suggested with the Top 4 teams does burn me on these two plays, but that's 'if' we only get four teams from the Metro, and 'if' a team like Montreal doesn't build off the experience of last season.

Not saying that's how this year ends up playing out, but you don't have to be right very often at these prices with that type of thinking. The next step there would be to consider the possibility of looking at the 'No' for some of those chalky Metro teams as a way to potentially balance out things if the Atlantic gets 4+ teams in the playoffs. 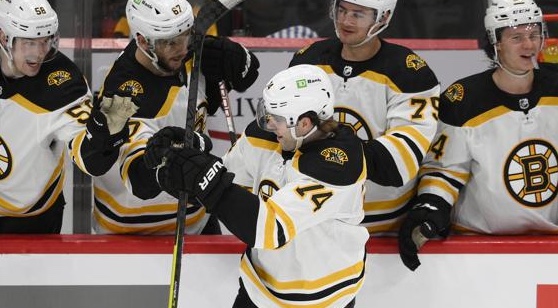 The Boston Bruins have the third-highest odds to win the Atlantic Division entering the 2021-22 season. (AP)

Two of the six President's Trophy winners during those years came from this division, as Tampa's domination in 2018-19 saw them finish with 128 points in the regular season to really skew those numbers. All three of the top three finishers did finish with 100+ in the two most recent seasons in that range, and with how good all four of the teams at the top of this division are expected to be, and how bad some of the teams at the bottom of this division are expected to be, I think we get three teams with 100+ points again this year.

This is the division you'll generally find the worst team in the NHL too, as five of those six season's saw the league's worst reside here, including those two most recent seasons as well.

52, 54, 69, 62, and 64 were the point total tallies for these Atlantic Division basement dwellers that were also league-worst in those five seasons which has a peak right around Buffalo's division-worst total of 68.5. Whether it's Buffalo or perhaps Detroit/Ottawa as the team you believe will be the worst in the Atlantic this season, 'under' probably is really the only way to go.

Of the four teams expected to compete for this division title, five points are all that separate them in these season point totals futures, and I think at least with Boston and Florida, any thoughts on them being the Atlantic Division champions have to be correlated with an 'over' play for these point totals as well. Florida sits at +425 to win the division, while Boston's slightly better than that at +380.

Personally, I prefer the Panthers as they are the team I see more as one on the rise in becoming a league-wide threat, whereas the Bruins best days may be behind them and that downward trajectory so many past championship teams ultimately take doesn't feel like it's that far off for the Bruins. Boston's still likely got plenty in the tank this year, but of the two, I believe Florida is the better bet for both a season point total 'over' play, as well as taking down the division.

Toronto is an interesting case as they are the slight favorites (+195) to win the division over Tampa (+210) even with the same point totals offered on both. Toronto's turn to G Petr Mrazek this year to be paired with Jack Campbell is something that I don't think will be the answer for them yet again, as a lot of 4-3 games are probably in the Leafs future this season.

Don't think you can take any team to win a division with that type of outlook as those games can get too coin-flippy at times, and the core of this Leafs team still has that mental hurdle of success to climb fully over. Most of that is related to the playoffs and Toronto will get there again this year, but there really is minimal interest in any Leafs futures coming into the season.

A similar thing can be said with Tampa this season, as two straight Stanley Cup Finals appearances in the chaotic travel/world conditions they were played in, and the fear of Tampa running out of gas this year takes them out of most futures that are positive-based for them (division title, season points over).

The talent is still off the charts in Tampa Bay, but Pittsburgh was the most recent team to win consecutive Cups and the following season they ended up in second in the division before losing to Washington in the second round. A similar fate is what I would guess lies ahead for the Lightning this season, as a regular season with 106 points and a second round playoff loss sounds very reasonable and easy enough to pass on them completely.

Which leaves Montreal, and at 89.5 for a point total, the first thought was that it seems a little disrespectful for the Stanley Cup Finalist. I know there are injury concerns for the Habs to start the year, and they'll be without Shea Weber for the season, but 90 points should be attainable for this team if they beat up on those below them in this division like they are expected too.

Fourth place was never below 93 points in that six-year span already referenced, and a run at fourth place or better for Montreal this year is really very reasonable to think as well. This could end up completely off the rails if Montreal's injuries turn out to be a bigger issue than expected or they multiple exponentially, but the first thought of it being a rather disrespectful number is still something I can't get over.

Tampa goalie Andrei Vasilevskiy is the favorite for the Vezina this year at +380 and it really isn't even close with the next guys being listed at +1000. The last 10 winners of this award have all been first-time winners, a list that includes Vasilevskiy and his 2019 victory. That, the price, and the Tampa fatigue narrative has me not interested at all in taking Vasilevskiy here, but it's tough to make a strong case against him either.

Of all the goalies who put together multiple Vezina Trophies in their respective careers recently (Patrick Roy, Ed Belfour, Donimink Hasek, Martin Brodeur, Tim Thomas) all managed to rack them up in consecutive years or a two-in-three type of deal. That could be considered a plus for Vasilevskiy here and he's a deserving favorite, but it's that price and questions about Tampa's effort this year that have me staying away. 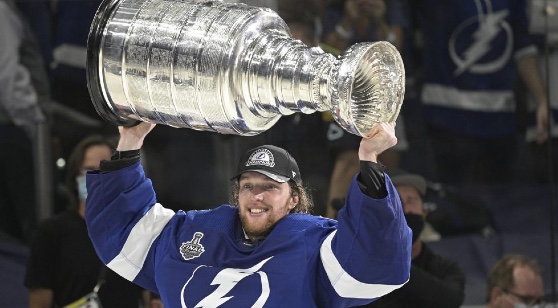 Tampa Bay Lightning goalie Andrei Vasilevskiy is a strong contender to win the Vezina Trophy for the 2021-22 NHL season. (AP)

Might as well go all-in on the Panthers in this division this year, as head coach Joel Quennville (+700) is only
behind Tampa coach Jon Cooper (+600) to win this award this season. With the thoughts on Florida being a potential division champion in the Atlantic, it would go to figure that a division crown over Tampa/Toronto/Boston-plus would put Quennville as a pretty heavy favorite.

Two-plus decades between Jack Adams' wins would be quite the story for Quennville as well, as he only won the award when he was with St Louis at the turn of the century and not during any of his years in Chicago when he won three Stanley Cups.

He's got enough talent on his Panthers team to make a real run at being one of the best teams in the league, and the opportunity is there as well to be the best in a division that has the reigning two-time champs, last year's SC Finalist, and Boston and Toronto too.