The Pittsburgh Penguins picked up their first win of the season against the rival Washington Capitals on Sunday.

These two teams have been among the juggernauts in the Eastern Conference over the last decade thanks to superstars Sidney Crosby, Evgeni Malkin, Nicklas Backstrom and Alexander Ovechkin.

They will meet again on Tuesday as the NHL looks to condense it’s schedule into numerous back-to-backs in order to insulate itself as much possible as from COVID. 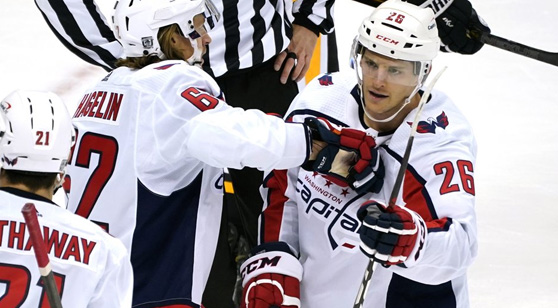 The Capitals will complete their four-game road trip to start the season on Tuesday when they face the Penguins. (AP)

Washington is currently atop the East Division with a 2-0-1 record through three games.

The Capitals have yet to play at home either, as they went on the road to face the Buffalo Sabres in their first two games last week.

In the opener, T.J. Oshie was the first star with one goal and two assists, while Backstrom and Ovechkin added two points each in a 6-4 win for Washington. Six different players scored for the Caps in that game.

Neither team could find the back of the net as often the very next night. Tom Wilson notched a goal and an assist to lead Washington to a 2-1 win in that one.

Pittsburgh’s defense was ripped apart by Philadelphia in its first two games of the season.

The Penguins allowed 11 goals to the Flyers, as Tristan Jarry did not look solid in net. Brandon Tanev and Mark Jankowski each had a goal and an assist in the opener, while Crosby found the back of the net thanks to a poor clearance from Carter Hart.

The second game saw Philadelphia score three times in just over four minutes midway through the first period. Pittsburgh responded with goals from Tanev and Crosby in the span of 32 seconds for a total of five goals in a six-minute stretch, but that was all the Penguins could muster.

The Flyers slotted in two more goals in the third period to ice the game.

The usual suspects didn’t lead the Penguins past the Capitals on Sunday. Crosby and Malkin failed to score a point, as Pittsburgh’s three goal scorers were Evan Rodrigues, Colton Sceviour, and Marcus Pettersson.

Backstrom, Ovechkin, and Nic Dowd lit the lamp for the Caps, and this game went into a penalty shootout tied at 3-3.

Both goaltenders rose to the occasion in the shootout. Pittsburgh’s Casey DeSmith shut the door on Oshie, Backstrom, Evgeny Kuznetsov, and Ovechkin, while Washington’s Ilya Samsonov stopped Kris Letang, Crosby, and Malkin before Jake Guentzel won it for the Pens.

Ovechkin is one of eight players with 700 career goals, and he can potentially move up to fourth on the all-time list by the end of this season. He will tie the great Mike Gartner for the seventh-most goals all-time with one more tally. Ovie has led the league in goals nine times in his career, including seven of the last eight seasons.

Washington hasn’t been just the Ovechkin show for quite some time though. Oshie is one of the most dangerous players on open ice, and he is known as one of the best penalty takers in the NHL. Backstrom is still playing at a very high level with two goals and two assists in the Caps’ first three games, while Kuznetsov has two assists.

The front office looked to improve defensively this offseason.

Henrik Lundqvist was brought in to be a veteran presence and a mentor to the young Ilya Samsonov.

Unfortunately, Lundqvist’s health issues mean he won’t play this year, but he can still provide advice to the 23-year-old Samsonov. Zdeno Chara signed for the veteran minimum too after retiring from Boston, and he can still impact the game despite being two months shy of 44.

Tom Wilson will be the player to watch on Tuesday. Wilson is known as an instigator, and he continually gets under Pittsburgh’s collective skin. There is no denying his talent though, and he continues to improve offensively after finishing with a career-high 44 points last season.

The window may have closed on the Penguins. Pittsburgh has been to the postseason for each of the last 14 years thanks to Crosby and Malkin, lifting the Stanley Cup three times in that stretch.

However, the two future Hall of Famers are now on the wrong side of 30, and they may have lost a little something.

Malkin was incredible last year before COVID caused the league to postpone play for months. He tallied 74 points in 55 games, finishing with 18 more points than any other player on the team. However, he has yet to register a point in three games this season, and he hasn’t looked like the Malkin of old.

Crosby’s health is a concern once again after he missed two dozen games during the 2019-20 campaign. He had largely shaken off concerns over his durability at the start of the decade, but those questions are re-emerging.

There is no doubt he is still elite when healthy though, although both of his goals this year have come off the power play.

The big concern for Pittsburgh entering the season was the play of the third and fourth lines considering the team’s cap situation. To this point, those players have acquitted themselves well with Tanev and Jankowski standing out.

However, the defending has been a mess. Letang is the Penguins’ best defenseman, and he has a -5 plus/minus through three games. Brian Dumoulin is the only other quality defenseman on the roster. The goaltending situation has been dreadful too with Jarry and DeSmith not playing well.