The Toronto Maple Leafs haven't won a playoff series since 2004, but they have pushed the Montreal Canadiens to the brink of elimination.

It looked like we might get the Leafs of old, as Toronto lost to Montreal in Game 1 by a 2-1 margin in Jack Campbell's first NHL postseason start. Ever since then, Campbell has been the story. He has allowed a total of just two goals in the previous three outings, including a 32-save shutout in Game 4 in Montreal. The Canadiens have had a power outage, lighting the lamp just four times in four games. That kind of offensive production simple will not do.

William Nylander has helped pick up the slack with John Tavares on the shelf, scoring a goal in each game of the series. In fact, his four goals have equaled that of the entire Canadiens team.

Still, in the back of every bettor's mind, is that date of 2004. And 1967. The Maple Leafs just haven't had a lot of postseason success, and even when things are going well, most bettors and fans are muted about their excitement involving Toronto. But Montreal's offense has been so moribund in this series that it's hard to envision a sudden burst of output.

It will be a lower-scoring game, for both teams, and it will be a hard-checking, tight game in Toronto, but it will go in favor of the home side, as they advance to face the Winnipeg Jets in the next round. 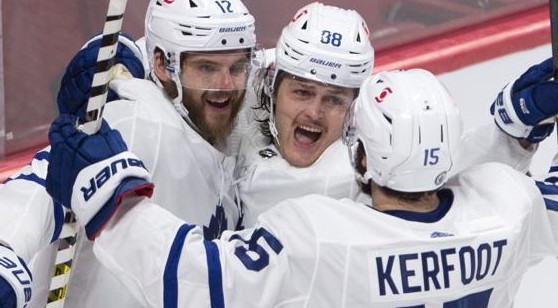 There is no reason to be surprised by the amazing run of Campbell against the Canadiens, as he was 4-1-1 with a 2.16 GAA and .918 SV% in six starts against Montreal during the regular season. We keep expecting the bottom to drop out, and for Campbell to fold under the immense pressure of the playoffs. He doesn't. Surely he will fold on the road. He doesn't. So what's to say in an elimination game that he is going to suddenly go belly up, giving up several goals to extend the series?

You can count me among those very skeptical of the Leafs, especially after losing Tavares indefinitely in Game 1 due to an upper-body injury. But they turned that negative into a positive, and they have played tremendous defense while getting timely goaltending. The defense might be the most surprising of all, and what has been lacking from this team in recent seasons. So perhaps the Buds are on their way to advancing to the second round for the first time in 17 years. But if the Canadiens are able to do the unthinkable and push the season back to Montreal, the hand wringing will begin again in Hogtown.