The Boston Bruins smacked around rookie Ilya Sorokin in Game 1, as they weren't going to take the same path to the golf course that the Pittsburgh Penguins took. Sorokin won all four of his starts against the Pens in the opening round, but he was hammered for five goals on 39 shots in the series opener. Bench boss Barry Trotz went back to veteran Semyon Varlamov for Game 2, and the move paid big dividends.

Varlamov allowed three goals on 42 shots, and he was the beneficiary of a turnover and breakaway goal for Casey Cizikas in overtime, stunning the crowd at TD Garden, while helping the Islanders gain a road split to seize home-ice advantage in the series. While the latter does hold some weight, you can expect this series to be a seesaw affair, and we haven't seen anything yet.

The books don't care about home-ice advantage, as Boston is installed as a rather healthy favorite on the Island. The last time these teams battled in Uniondale, the Isles picked up a 2-1 win in a shootout over the B's, as Varlamov was the backstop that day. Prior to that, New York rolled to a 7-2 win with Varlamov in the crease. The only problem with those two games, Jaroslav Halak was in net for Boston, not Rask.

However, in the game where these two goaltenders faced each other in Uniondale, the Isles doubled up Rask and the Bruins by a 4-2 count as short 'dogs at home on Feb. 13. And Varlamov edged Rask and the B's by a 1-0 count on Jan. 18 for one of his seven shutouts. 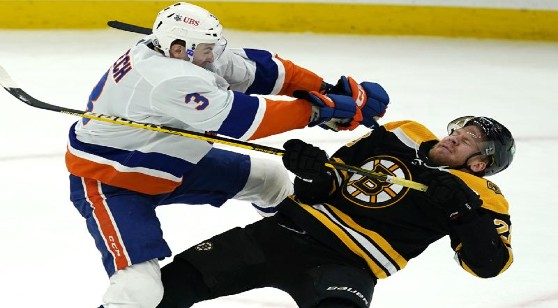 The goal total has failed to go UNDER in four of the last five meetings between the Islanders and the Bruins, including two PUSHES. (AP)

The Islanders are flying high after snatching Game 2 from the Bruins in overtime, squaring the series 1-1. While the books aren't terribly confident in an Isles win, New York won all four of its home meetings with Boston this season, and they're a tremendous play on home ice in front of their loud crowd. Varlamov was in the crease for all four of those home victories, he beat the B's in Game 2 on the road, and he was 5-1-0 with a 1.93 GAA, .943 SV% and one shutout in seven appearances against Boston in the regular season.

The Bruins are heavily favored, but the Islanders the much better value play. Varlamov was 12-3-3 with a 1.87 GAA, .937 SV% and four shutouts in 18 home starts during the regular season, too. All signs point to a home win, a 2-1 series lead for the Islanders and, more importantly, a ticket which cashes for the underdog.

As far as the total is concerned, the OVER is 3-1-2 in the past six meetings between these teams, including an OVER result in each of the first two games in this series. And if that doesn't make you feel good about an OVER play, consider that the OVER is 4-1 in the past five for the Islanders as an underdog in the postseason, while going 5-1 in their past six overall as a home 'dog.