The Carolina Hurricanes and the New York Rangers meet at Madison Square Garden on Sunday afternoon for Game 3 of the Eastern Conference Semifinals, a best-of-seven series. The Hurricanes lead the series 2-0. Puck drop is scheduled for 3:30 p.m. ET, and the game can be viewed on ESPN.

I have to admit, I had fun on Friday night. I went to see the Mongolian heavy metal band The Hu in Raleigh, and might have had a few adult beverages. The post-concert shenanigans took place on Glenwood South in Raleigh, including taking in the Edmonton Oilers-Calgary Flames game on a projection TV, and smoking my buddy Fred at Bubble Boy hockey at the intermission. It was an odd machine, as it was Hurricanes, which was fine since they're obviously local, but the Columbus Blue Jackets was the other team. I didn't know there was any kind of rivalry there. Just seemed like a strange choice.

Anyway, I had fun asking people in Rangers sweaters what the score was earlier, pretending I didn't know. Enjoy your Bud Light, boys! I had a rise-and-shine 4:45 p.m. hockey game Saturday against the Carolina Hurricanes Warriors team made up of ex-military, and my old bones and still-hungover brain is hurting. At least we won like the Canes.

Hurricanes fans will be the visitors to an unwelcoming city in Game 3. While there is obviously a lot more entertainment and sports choices in New York City than in Raleigh, the Rangers faithful are a proud bunch, and MSG will no doubt be inhospitable to the boys in white. I have a feeling that the Rangers are going to come alive on home ice and keep the Hurricanes, 0-3 on the road so far in these playoffs, searching for their first away victory of the postseason heading into Game 4.

The Hurricanes won the first two games by a combined score of 6-2, but those games were also on home ice, where the Canes are a perfect 6-0 so far this postseason. Carolina needs to prove it can score on the road, and win on the road. They were outscored 15-6 in three games in Boston in the first round, and that simply won't do if the Hurricanes want to continue advancing.

Carolina has picked up four consecutive victories against the Rangers since a 2-0 setback on home ice in a day game on March 20. That streak includes a pair of road win at MSG on April 12 by a 4-2 score, and April 26 by a 4-3 score. The Canes cashed as underdogs while the OVER hit in each of those games, and the four points gained were instrumental in securing the Metropolitan Division title and home-ice advantage.

The Rangers have posted four wins in the five games at home, while going 6-2 in the past eight as a home underdog. They're also 12-3 in the previous 15 outings played on a Sunday, while going 9-4 in the past 13 on a day of rest.

Unlike the Canes, the Rangers have struggled with four straight loss in the Conference Semifinals round. They're also 0-5 in the past five as an underdog, and 14-37 in the past 51 in the postseason when not favored.

The Hurricanes have been world beaters on home ice, going a perfect 6-0 so far, but Carolina is in the second round still searching for its first road victory of the postseason. Eventually this team is going to break through and play a great playoff road game. They actually led 2-1 early in the second period against the Bruins in Game 4 before getting snowed under. Whoever wins this game will go a long way in determining who wins this series.

I think the Rangers are still alive and well, it just had trouble solving Antti Raanta in Game 2, as he was a brick wall. He'll be a little more giving on the road, although I don't think we have an offensive showcase like the Oilers-Flames series. Look for a couple more goals, but not enough to bang the OVER. 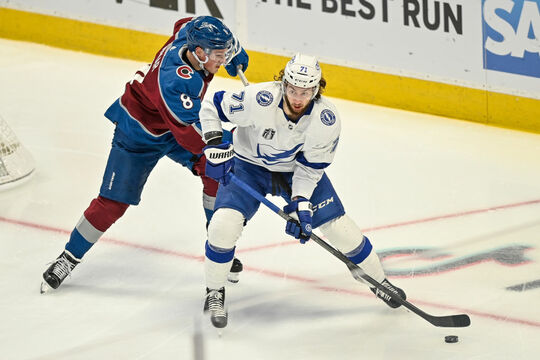