The MLS Cup Final is set for Saturday, December 11 and will feature the Portland Timbers from the Western Conference taking on New York City FC from the Eastern Conference. The match is set for 3:00 p.m. ET and will air on ABC from Providence Park in Portland, Oregon.

As always, VegasInsider expert Toby Maxtone-Smith provides his Score Predictions, Tips and Betting Analysis for the championship fixture on Saturday.

The 2021 MLS Cup final looks almost too close to call. Portland Timbers meet New York City at the Providence Stadium in Oregon - the Timbers’ home ground. It will be a raucous atmosphere as the home team go for their second MLS title.

Young Argentine striker Valentin Castellanos has been the breakout star of the season, picking up 20 goals in 33 games. He returns from being suspended for the 2-1 semi-final win over Philadelphia Union and his return, fresher than most other players on the pitch, could be the key. He has hit form at the perfect time, scoring eight in his last six games. 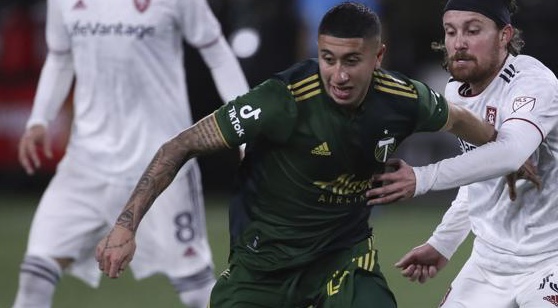 Portland has won seven straight MLS matches when playing during the daytime. (AP)

Portland cannot be underestimated, however. They have great momentum behind them after winning ten of their final 14 regular season games and if anything their path to the final has been slightly more comfortable with wins over Minnesota United, Colorado Rapids and Real Salt Lake by an aggregate score of 6-1.

But they have had a lot of good fortune on their side. The expected goals model has them conceding more chances than they have taken. Their defence is a big weakness, conceding 52 in 34 regular season games. And while it appears it has tightened up somewhat during the play-offs, that vulnerability will not have disappeared completely.

Finals can often be dour, low-scoring affairs, but the MLS Cup Final tends to buck that trend slightly. The last ten finals have seen 24 goals - only very slightly below the average. Over 2.5 goals at 1/1 makes more appeal than backing the unders.

Both teams opened up a similar price to win the MLS, but NYCFC’s performances have been consistently better. It could go to the wire but NYCFC’s superior quality should shine through in the end.