The Volunteers were back at full staff Wednesday against a very shorthanded Ole Miss side in Knoxville, but just because Kennedy Chandler and John Fulkersonwere back didn't exactly mean they were guaranteed to not have any rust. Chandler and Fulkerson were out previously due to COVID, and they combined to shoot 5-of-15 with just 11 total points and two rebounds. Santiago Vescovi picked up the pace with 17 points, including four triples, with six rebounds, five assists and three steals in his 42 minutes during the 66-60 overtime win against the Rebels.

LSU was looking to bounce back from a beatdown at Auburn on Dec. 29, and facing a difficult test at home against Kentucky. The Tigers hadn't beaten a ranked team all season, but that changed with a solid victory at home over the Wildcats, 65-60. LSU covered the two-point spread as the UNDER cashed, with the suffocating defense of the Tigers holding the Wildcats to a season-low in points. Things could have been even better for LSU if not for a dismal 8-of-15 night from the free-throw line, or just 53%, while turning it over 15 times.

The Volunteers entered the Ole Miss game with four consecutive covers since an overtime loss on a neutral floor against Texas Tech on Dec. 7. While Tennessee didn't come close to covering against Ole Miss as 16.5-point favorites, it showed the Vols can win games even when having an absolutely awful night offensively. Tennessee shot just 39%, or 25-of-64, from the field, while managing just 29%, or 10-of-34, from behind the arc. The Vols also turned it over 18 times, and they managed to outrebound a Rebels team with just nine total players by one. Tennessee was facing an Ole Miss team missing its leading scorer, too.

Tennessee has had a difficult time against LSU in recent seasons, losing three straight meetings, while going just 1-5 SU in the previous six outings. The Tigers are 5-1 ATS across the past six in the series, too, while winning four straight home meetings dating back to March 4, 2015.

The Tigers have alternated covers and non-covers in each of the past four games, although they're 11-3 ATS overall in 14 games this season. At home, the Tigers are 9-0 SU/ATS, too. The question prior to the Kentucky game was, "yeah, but who have they played at home?", but that was answered in a big way against the Wildcats. Kentucky came to their Baton Rouge and it was held to 60 points, 22.2 below its season average.

LSU heads into this game with impressive numbers dating back to last season, going 19-6-1 ATS across the past 26 games overall. The Tigers are also 15-5-1 ATS in the past 21 games at the Pete Maravich Assembly Center, while going 22-8-1 ATS in the past 31 as a favorite. They're also 12-4 ATS in the past 16 games against teams with a winning overall record. 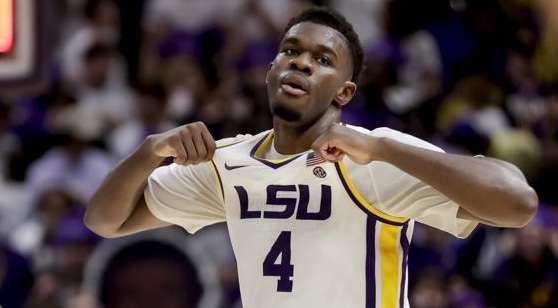 The LSU Tigers have covered 13 of the past 16 games overall. (AP)

The Tigers will face a ranked team for the third consecutive game after playing a less than challenging schedule during the early going. Things certainly get much tougher into the conference schedule in the SEC, and it's not just a football league anymore. LSU isn't the most gifted offense, but man can they shut it down on defense. Since kicking off conference play, the Tigers are averaging just 60.0 PPG, while allowing 65.0 PPG as the UNDER has hit in each of the past two games. In fact, the UNDER is 11-1 in the past 12 games, and that's the best play on the board here.

Tennessee's struggles against Ole Miss, a team it should have boat raced, is a bit of a concern. They have had trouble with the Tigers in recent seasons, so a trip to Baton Rouge against a ranked LSU isn't going to end well. And it is going to end in a low-scoring affair, too.