The Los Angeles Chargers (9-7) travel to meet the Las Vegas Raiders (9-7) for a Week 18 battle at Allegiant Stadium in Las Vegas for Sunday Night Football. Kickoff is scheduled for 8:20 p.m. ET, and the game can be viewed on NBC.

Depending on the results earlier in the day, this AFC West battle in Vegas could very turn out to be a winner-take-all game for a final playoff spot in the AFC. If the Jacksonville Jaguars upend the Indianapolis Colts, and the Baltimore Ravens top the Pittsburgh Steelers earlier in the day, then both the Chargers and Raiders would be in. If the Colts and Steelers each win, then the Raiders would need to win to get in. Either way you slice it, the SNF game is going to be exciting and important.

The Chargers doubled up the Raiders 28-14 back in Week 4 as three-point favorites as the UNDER connected. Los Angeles has played themselves into this dire spot with costly losses down the stretch at Denver and at Houston, two games they probably should've been able to win. They didn't, and now they're here. They did get some revenge last week with a 34-13 victory over the Broncos last week as an 8.5-point favorite.

The Raiders have played themselves into this win-and-in scenario, defying the odds with three straight victories in Cleveland, against Denver and at Indianapolis in the past three weekends. Vegas has had the benefit of some COVID shortages for their opponents, but they have also played some good, sound defensive football with opportunistic offense. This is going to be a nip-and-tuck game which comes down to the very end.

The Chargers snapped a two-game losing skid and 0-2 cover stretch with a sound 34-13 win against the Broncos last time out as the OVER hit. The Chargers are just 4-7 ATS across the past 11 games overall, while the OVER has hit in five in a row.

The Silver and Black have racked up three straight wins after a blowout loss at Kansas City in Week 14, while covering each of the past two. The Raiders haven't had a cover streak of three or more games since going 4-0 ATS from Nov. 1-22, 2020, including a win over the Chargers.

For Vegas, they were slinging it all over the field under former coach Jon Gruden, but interim head coach Rich Bisaccia has put a much different stamp on this team since taking over Oct. 17. The Raiders have become more of a run-first, defensive-minded team. They have posted 23, 17, 16, 9 and 15 across the past five, while going for 17 or fewer points in seven of the past nine outings. Defensively, they're allowed just 15.7 PPG across the past three games, and it's no surprise the UNDER is 3-0 during that run. 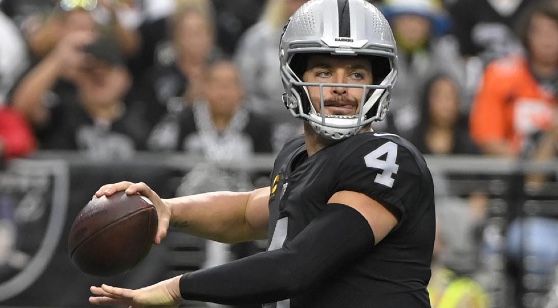 The Raiders are just 1-5 ATS in their past six at home against the Chargers in Oakland or Las Vegas.(AP)

INSIDE THE STATS - LOS ANGELES CHARGERS

INSIDE THE STATS - LAS VEGAS RAIDERS

The Chargers have dominated this series lately, at least against the number, going 5-1 ATS in the past six visits to Oakland and Las Vegas. The road team is also 10-4 ATS in the previous 14 meetings in this series, with the UNDER going 7-3 in the past 10 meetings. As such, there are a lot of good reasons why the books have the Bolts installed as a favorite on the road in a coin-flip game. I want to like the Chargers, and their offense is outstanding. But their inability to stop the run has me worried about RB Josh Jacobs and the run game for the Raiders.

I think we're going to get a one-possession game, and we're likely going to get a higher-scoring game after a little bit of nerves early on with a slow start. It's been a while since we've had such a meaningful Chargers-Raiders game, but this might really rekindle this rivalry if the winner gets into the playoffs, and the loser goes home. It's going to be a fun one.