The Wildcats are on a roll since a 65-60 loss at LSU on Jan. 4, a game which saw the Wildcats post a season low in points. As bad as the loss to the Tigers was, that's how good the win over Tennessee was last time out. The Wildcats spanked the Volunteers 107-79 on Saturday, easily cashing as 4.5-point favorites. The Wildcats were an amazing 68%, or 38-of-56, from the field, including a sparkling 61%, or 11-of-18 from behind the 3-point line. In addition, Kentucky was an outstanding 20-of-21 from the free-throw line while turning it over 12 times to 20 for the Vols. Oddly enough, Kentucky only outrebounded Tennessee 23-22 in that game.

The Aggies are on an eight-game win streak, including six straight games since Dec. 18-Jan. 8 with 80 or more points. The past two games have seen the offense struggle, posting a 67-51 win over Ole Miss on Jan. 11, and 67-64 at Mizzou on Saturday, missing out as a five-point favorite. The Aggies hit 38% from the field, going 24-of-63, while misfiring on 13 of 17 from behind the 3-point line. The difference was A&M turning it over 10 times to 17 for the Tigers. Three players went for 10 or more points, including 18 from Henry Coleman III.

The Wildcats took care of the Volunteer State in the past week, blasting Tennessee 107-79 last time out at Rupp Arena, while also topping Vanderbilt 78-66 in Nashville on Jan. 11. Kentucky has covered back-to-back games, while going 6-2 ATS in the past eight games overall. Kentucky has rolled up 78 or more points in seven of those past eight games, while going for 92 or more points in five of the past eight outings. This offense has been on point, and it's going to be a huge test for the Aggies.

For totals, the OVER/UNDER has alternated in each of the past six games. The OVER hasn't cashed in consecutive games since Dec. 18-22 in a neutral-site game against North Carolina and a home date against Western Kentucky. The OVER cashed last time out against Tennessee, it's second time hitting triple digits this season.

Texas A&M has a very impressive 15-2 SU record, but they fell to TCU and Wisconsin on a neutral floor, perhaps the two best teams the Aggies have faced so far. A 73-67 win over Notre Dame on Nov. 24 is arguably its best win, or an 86-81 win over Arkansas on Jan. 8 as a 1.5-point underdog. That 86-point showing was the highest against a Division I opponent overall this season, tying the point total they posted Nov. 14 against Texas A&M-Corpus Christi. 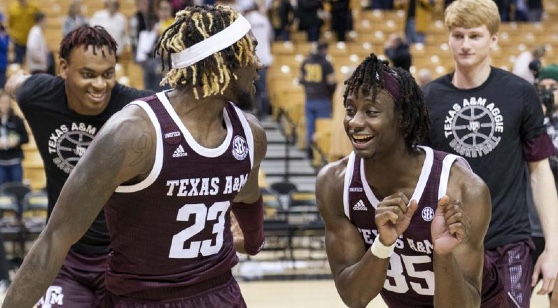 INSIDE THE STATS - KENTUCKY WILDCATS

INSIDE THE STATS - TEXAS A&M AGGIES

The Wildcats were super impressive last time out in a battle of ranked teams against the Volunteers last time out. The Aggies have played with fire in the past two games, struggling with their shot while scratching out a pair of victories against lesser teams. Texas A&M hasn't really faced a trying schedule, so while its overall record is impressive, the Aggies haven't exactly faced a gauntlet so far this season. This will easily be the biggest test.

I don't think Texas A&M has the horses to contain Oscar Tshiebwe, who continues to be a double-double machine. He has pulled down 12 or more boards in seven of the past eight games, while averaging 22.7 PPG and 14.0 PPG across the past three outings. He is going to run wild in Kentucky, with Texas A&M offering very little resistance. Look for the game to be close in the first half before the Wildcats pull away in the final 20.