The Tigers had been humming along with wins over Kentucky, Tennessee and Florida before getting tripped up last time out against Arkansas at the Pete Maravich Assembly Center in Baton Rouge on Saturday. It was just the second loss of the season for LSU, and the 58 points was the second lowest output of the season. A low of 55 points came Dec. 29 at Auburn in the first loss. The Tigers shot just 38%, or 21-of-55, from the field, while hitting only 26%, or 5-of-19, from downtown. LSU wasn't particularly careful with the rock, either, coughing it up 16 times while getting outrebounded by Arkansas at a 37-to-27 clip.

Alabama has posted good resume-building wins over Gonzaga, Houston, Miami-Florida and Tennessee this season, but it is in freefall lately. The Crimson Tide has dropped three in a row against Missouri, Auburn and Mississippi State, with the defense struggling to contain anybody. During the three-game skid, Alabama is allowing 83.7 PPG, well above the team's season average of 74.6 PPG allowed. The latter is 310th in the nation, bad enough already, but lately the D has been horrific.

The loss to the Razorbacks not only snapped a three-game win streak, but also a 3-0 ATS run. The good news for Tigers backers is that LSU hasn't had consecutive non-covers at any point this season. The last time LSU failed to cover in consecutive games was Feb. 23-27, an 0-2 ATS skid.

LSU is on a nice 8-3 ATS run across the past 11 games overall, while going 13-4 ATS on the season. While that's all well and good, the Tigers find themselves underdogs in this trip to T-Town, as Alabama has won four straight in this series, while going 3-1 ATS. The OVER is also 3-1 in the past four meetings. Alabama has won five of the past six meetings at home, while going 4-2 ATS, and the OVER has also cashed in four of those meetings.

Not only has Alabama hit the skids with a three-game losing streak, while going 3-5 SU across the past eight outings, the Crimson Tide has posted an 0-2-1 ATS mark during the slide. They're also 1-7-1 ATS in the past nine games overall. 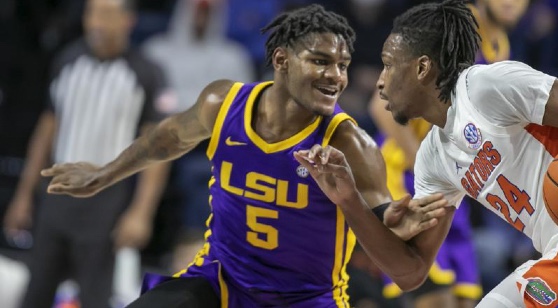 While, yes, both teams are coming off a loss, these are still two teams going in completely opposite directions. LSU was playing good basketball until the loss to Arkansas, including wins in marquee games against Kentucky and Tennessee. The Crimson Tide had some very, very nice wins earlier in the season, but things have gone downhill in a hurry during conference play. The lack of defense for Alabama has been alarming, while LSU continues to be one of the better defensive teams in the nation.

If this game were in Baton Rouge, LSU might be favored by double digits the way things have been going for Alabama lately. But, the Tide has owned the series in recent seasons, and the books are still taking that into account. You shouldn't, though. LSU is the better team, and it's a gift taking the Tigers and catching points. Roll with LSU, and play the money line, too.