UFC Featherweight Champion Alexander ‘The Great’ Volkanovski looks to defend his title for the second time against former title challenger Brian ‘T-City’ Ortega in the main event of UFC 266, scheduled to take place on the 25th of September in the T-Mobile Arena of Las Vegas, Nevada.

In the co-main event the UFC has yet another title fight in store for fans, as Women’s Flyweight Champion Valentina ‘Bullet’ Shevchenko puts her title on the line against divisional contender Lauren ‘Lucky’ Murphy. 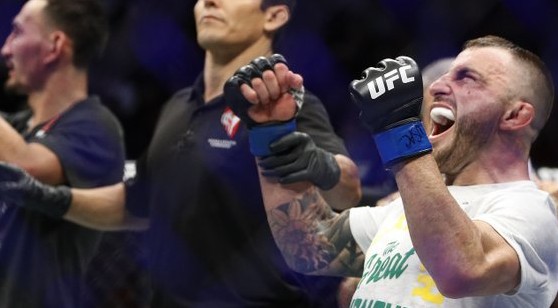 UFC Featherweight Champion Alexander Volkanovski has yet to taste defeat in the UFC octagon. He has two wins over former 145-pound champion Max Holloway. (AP)

Since the betting line for UFC 266 opened back in early July, some money has been coming in on the Ortega's side, which is why we're seeing more value on the champion - just like we predicted further down the page.

As of right now we are a little under two months out from the UFC Featherweight Championship bout between Volkanovski and Ortega.

Volkanovski is the rightful favorite in this matchup being the champion. However, it’s clear that sportsbooks have yet to be influenced by the public’s opinion.

Ortega had a good last fight, while Volkanovski’s last split-decision win over Holloway is controversial.

Once we get closer to the fight, I think we will start to see money coming in on Ortega’s side, which will shift the betting line in his direction.

WHERE IS THE VALUE?

It’s rare that the value is on the challenger, and I don’t think that is different for this fight.

Historically, champions have a win rate of around 65% and in recent years that percentage is closer to 70.

With current odds the value is on Volkanovski as the -190 betting line (65% implied probability) is less than 70%.

Usually I advise against waiting for more value if you already have a valuable betting line in front of you, and sharp money could very well come in on the champion sooner than later.

Money came in on Volkanovski the last time this fight was scheduled, however I think the public will side with Ortega for this one.

The statistics show a clear advantage for Volkanovski in the striking department too. Ortega has a pretty record, but he has an act for getting out landed in his fights, even when he’s winning. This tendency hasn’t mattered for Ortega throughout most of his career, but we all remember how it served him in his title fight against Holloway.

He definitely needs a finish to beat Volkanovski. The champion is too sharp to lose on the cards.

I see value on the champion.

Volkanovski-Ortega tale of the tape

There's a big difference between these two fighters, and it's the striking numbers.

Ortega has an act for getting outstruck while Volkanovski is good at outstriking his opponents. Even in fights that Ortega is winning, he falls behind on the strike totals.

Ortega is a great opportunist, don't get me wrong, but he usually falls behind on the scorecards and relies on his fight-ending ability to carry him across the finish line.

'T-City' has been very successful in his UFC career, but we all saw what happened when he couldn't find his finish against Max Holloway. He got chopped up in the championship rounds.

Volkanovski is a volume striker who even outlanded Holloway twice in their two bouts. He has a great mixture of strikes and he can switch up the targets with leg kicks and body shots.

The champ will probably want to stand with Ortega due to Brian's dangerous submission game, so I expect Volkanovski to get ahead on the striking numbers early.

Both fighters are good strikers, but Volkanovski dishes out so much more than he absorbs, whereas Ortega has a history of doing the opposite.

The champion will get his hand raised in the main event of UFC 266.