The NASCAR Cup Series took the last two weeks off and I must admit that I was wandering aimlessly the last two Sundays bored out of my skull. But the drivers are back this Sunday with the Go Bowling 235 at the 2.45-mile seven-turn Watkins Glen International road course, the fifth of seven road course races in 2021. The two weeks off were a welcome sight for Denny Hamlin’s team.

“It’s definitely different to get a break like this, but I think it was good for everybody, especially the team guys, to get that break,” Hamlin said. ”But now it’s time to get back to business. I’m confident we’ll bring a fast car to The Glen, so we just have to go out there and execute.”

I think the break may have let Hamlin get a much-needed reset himself. He leads the Cup Series in points (874) and is tied for the lead in top-fives (11) and top-10s (15), but doesn’t have a win after 22 races. He had seven wins last season. I think what stands out most for me during Hamlin’s drought is that 13 different drivers have won a race this season.

Kevin Harvick won a series-leading nine races last season and hasn’t won this season in a bizarre fall. He’s only had six top-fives and I can’t remember him being an actual contender to win in any race this season. I’ve seen blips of speed at stages in races, but his car always goes away from him.

Harvick and Hamlin combined for 16 wins last season and have none so far. Nothing changed with the cars and rules package. They’re the same as last season. Did everyone else just get better and catch up, or did someone lose some 2020 set-up notes?

Harvick hasn’t been very good on the road courses lately so I’d have to be baited by a better price than the 20-to-1 odds to win that William Hill is offering, but I’m listening and flirting with the SuperBook bait at 40-to-1 odds. I’m attracted and now making up reasons why it’s not a horrible bet, such as he led the most laps at New Hampshire finishing sixth the last time the 750 horsepower low downforce race package was used. His teammate Aric Almirola won the race, the first win for Stewart-Haas Racing this season.

Harvick has a 2006 win at Watkins Glen in his 19 starts averaging a 12th-place finish. He was seventh in his last race there in 2019. Remember, New York shut down the state during the pandemic so no race at the Glen. The same goes for the 2020 Sonoma race because of California’s rules.

As you may have noticed over the course of this season, I’m not a big fan of all the road races or throwing dirt on the Bristol bullring, but I like Watkins Glen because it has some tradition and it’s a fast track. I can’t remember who said it this week, but one of the drivers said Sonoma was Martinsville while Watkins Glen was California Speedway to explain how different the two road courses were. Chase Elliott’s crew chief Alan Gustafson also had a good breakdown on why Watkins Glen is unique.

“Watkins Glen is different from other road courses,“ said Gustafson, who turned 46 on Thursday. “The really high speeds are one reason – the average speed is high, probably in the 140-150 mph range. Aerodynamics is also a huge part, and the braking zones are really important. I think those are the biggest things that stand out. The other thing that is really important is that there are a couple key places in the track, up to the esses and in through the inner loop where you have to change directions really, really fast. The car having stability to change directions really fast is super important to be successful there. I think that’s what makes Watkins Glen so different from the other road courses.”

I like Watkins Glen and Sonoma, and that’s it. Who came up with the idea that NASCAR fans love road courses? Is this their marketing plan to attract new audiences?

“When I first came into this series, nobody wanted to go to Watkins Glen and nobody wanted to go to Sonoma, and then road-course racing became cool somewhere along the line,” Harvick said. “And I think as drivers – I know for me in 2003 – we really decided to put a lot of effort into our road-racing program and we were able to get much better at it than what we had been the previous two years. And as that progression happened, everybody started to get better at it, and the benefit of the road-race ringer kind of went away. It was more equal, and that little bit that the road-race guys had in road-race knowledge,they lost in car knowledge – not having the familiarity with the Cup car and how unique they are to drive.”

Go Bowling at the Glen Contenders

So 40-to-1 with Harvick is a nice long shot to consider. I’m also going to have a bet on 2016 Watkins Glen winner Hamlin, who Circa Sports is offering at +1350, and I also like his Joe Gibbs Racing teammate Christopher Bell at 20-to-1 odds to win. Bell’s only Cup win came in February on the Daytona road course. He also was runner-up in his last two races in the 750 HP package at Road America and New Hampshire.

I’m also mulling over Ross Chastain at 50-to-1 odds (William Hill) because of his consistency using the 750 package. Check out his last five starts using it: eighth at New Hampshire, seventh at Road America, runner-up at Nashville, seventh at Sonoma, and fourth at COTA. Both the Chip Ganassi Racing Chevrolets, along with Kurt Busch (25/1), have been strong lately. Chastain’s team is giving him great cars.

For a while, it looked like Martin Truex Jr. (+550) was the newly crowned road warrior as he won three of five road races from 2017-2019. But then Chase Elliott took over. The 2020 Cup Champion is the biggest beneficiary of NASCAR’s sudden tilt to road courses. His only two wins of 2021 have come on road courses. He’s won six of his last eight starts on road courses. His seven road course wins have come in his last 11 starts. He’s about to catch road legend Tony Stewart with eight Cup wins on road courses and has his eye set on passing Jeff Gordon’s all-time high of nine wins on the roads. Elliott and his team are so good and far ahead of all the other drivers on roads that he could pass Gordon this season with three roads still left. The series races on the Brickyard’s infield road course next week and then race on the Charlotte ROVAL during the playoffs.

Elliott is simply the best. Winning six of the last eight races on road courses isn’t just a trend or isn’t him defying logic. He’s just better than everyone else and his team has put lots of effort into keeping him great. So I marvel at why the sportsbooks aren’t asking bettors to lay a price such as -120 on him to win. I saw William Hill’s +160, I thought it was generous and then looked at the two books that offer the best NASCAR odds in the world and the SuperBook was offering +200, and Circa Sports was offering +230.

Elliott has found his way to the front leading laps in his last 10 road course starts and leads all drivers in 2021 with 86 laps led in the previous four road races. 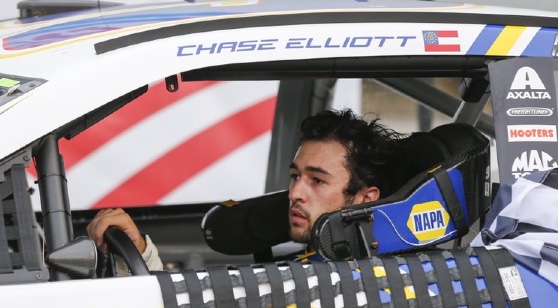 NASCAR returns from its break with the Go Bowling at the Glen, which Chase Elliott enters as the favorite. (AP)

Joey Logano is going to compete well this week. Do you know how I know? Because it’s the 750 package this week and he’s been sixth or better in nine of the 12 races using it, including his only win on the Bristol dirt. All eight of his top-fives have come with this package. He won a Cup race at Watkins Glen in 2015 and has won three of the last five Xfinity Series races there. William Hill is offering Logano at 12-to-1 odds this week.

Kyle Larson had a five-race stretch with the 750 package of finishing runner-up three times and winning twice, but since then he hasn’t had a top-five or led a lap in the two races since. This should be a good track for him because of the speed it requires and his car should be set up great thanks to Elliott’s team sharing notes. The best I saw on him was +450.

Kyle Busch is being offered at 8-to-1 at the SuperBook. He’s a two-time winner at the Glen in the Cup Series and also has a 2017 win in the Xfinity Series. His last two road courses saw him third at Road America and fifth at Sonoma.