The Iowa Hawkeyes (15-6, 9-5 Big Ten) travel to Kohl Center in Madison to meet the Wisconsin Badgers (15-7, 9-6) in a battle between two Top 25 clubs. It's a key battle between two upper-echelon Big Ten teams who are jockeying for a better seeding in the upcoming Big Ten tournament.

Iowa hit the skids a little bit with four losses in a five-game span, including a two-game sweep against Indiana on Jan. 21 and Feb. 7. However, they have rebounded in the previous two outings with a 79-66 win at home against Rutgers on Feb. 10, and 88-58 at Michigan State on Saturday as four-point favorites.

The 'under' has connected in three consecutive games, and five of the past seven outings. During their two-game win streak they're averaging 83.5 points per game (PPG), while allowing 62.0 PPG.

Wisconsin has alternated wins and losses over the past eight games, and they're coming off a 67-59 loss at Michigan, as the Wolverines showed them no love on Valentine's Day. The 'under' cashed in that game, and is now 3-0-1 across the past four outings. The under is also 7-2-1 across the past 10 outings.

The good news is that the Badgers haven't lost consecutive games since Jan. 24-27, 2020 at Purdue and at Iowa last season. The last time Wisconsin hosted Iowa, the Badgers thumped the Hawkeyes 65-45 as six-point favorites on March 7, 2019 as the 'under' (140) easily connected. 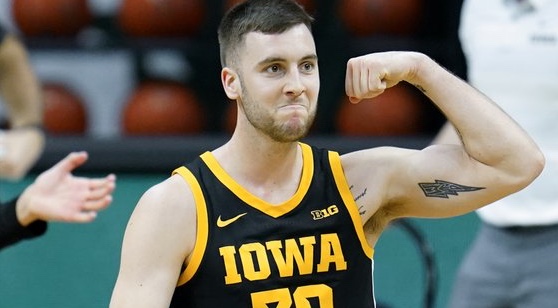 The Iowa Hawkeyes look for their third win in a row with a trip to Madison, Wisconsin on Thursday. (AP)

Iowa was on a 1-4 SU/0-5 ATS skid from Jan. 21-Feb. 7, but they have bounced back with wins and covers in each of the past two outings. It wasn't long since the Badgers covered three in a row, as they ripped off three wins and covers from Jan. 7-17 prior to the five-game hiccup.

At the defensive end, the Hawkeyes have really struggled. They have allowed 73.5 PPG to rank 259th in the country, while allowing 34.6 percent from behind the 3-point line. That's good for just 236th in the nation. They have held the opposition to just a 41.7 field-goal percentage, 106th overall.

Big Ten Player of the Year candidate Luka Garza leads the team with 24.5 points, 8.4 rebounds and 1.6 blocked shots per game, while also leading in field-goal percentage at 56.2.

Wisconsin has looked more like an NIT team than a team headed for the NCAA Tournament, going just 5-5 SU/ATS across the past 10. They're coming off a 67-59 loss against Michigan on Sunday. They're just 1-2 SU/ATS in the previous three at Kohl Center, as they're spinning their wheels in Madison, too.

The Badgers offense has been horrific lately, going for just 60.0 PPG across the past three outings. They have also allowed 67 or fewer points in three of the past four outings, with the 'under' going 3-0-1 during the span.

Wisconsin ranks just 70.3 PPG to rank 210th, while hitting only 43.0 percent from the field to rank 227th overall. The best part of their offense is their 3-point shooting, hitting 35.8 percent from behind the arc to rank 87th, and they're 44th with a 75.8 free-throw percentage.

While Wisconsin's recent performance after a loss sounds impressive, they are still just 2-5 ATS in the past seven games against teams with a winning overall record. They're a mediocre team at best, and they'll have their hands full trying to contain Garza.