The No. 5 Illinois Fighting Illini head to Williams Arena this Saturday to face the Minnesota Golden Gophers in a Big Ten battle. Tip-off is set for 3:30 p.m. (ET).

The Fighting Illini have been opened as five-point road favorites for Saturday’s game with the total line set at 149.5 points.

Illinois extended its straight-up winning streak to six games with Tuesday’s seven-point win at home against Northwestern. It has failed to cover in its last two games as a double-digit favorite to fall to 4-2 against the spread during this run. The total has stayed UNDER in four of the six wins.

With an earlier 27-point win over Minnesota at home, the Fighting Illini are 3-1 both SU and ATS in the last four meetings. The total went OVER in three of the four games.

Minnesota has dropped five of its last seven contests SU while going 2-4-1 ATS with Wednesday’s 10-point road loss to Indiana as a seven-point underdog. The total went OVER 138 points after staying UNDER in 10 of its previous 12 games.

The Golden Gophers are 6-1 SU in Big Ten play at home this season with a 5-1-1 record ATS. The total has stayed UNDER in their last six home games. 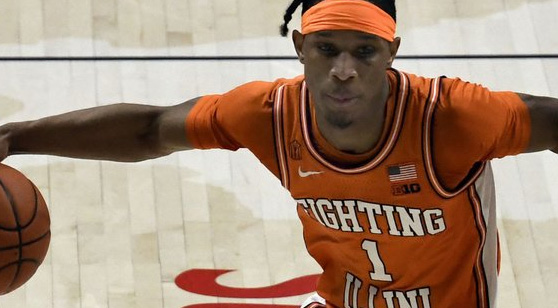 Illinois hasn't lost a Big Ten game on the road this season, producing a 4-0 mark as a visitor. (AP)

Guard Ayo Dosunmu and center Kofi Cockburn combined for 30 points in Tuesday’s win over Northwestern. Dosunmu continues to lead Illinois in scoring this season with 21.3 points per game.

The junior also leads the team in assists (5.1) while connecting on 49.1% of his shots from the field. He is shooting 42.2% from three-point range. Cockburn is second-leading player in points (17.4) along with a team-high 10.6 rebounds a game.

The Fighting Illini are averaging 81.2 points with 40.1 total rebounds a game. They are shooting 50.3% from the field and 38.9% beyond the three-point the three-point line. Illinois is allowing an average of 68.9 PPG with three of its last six games staying under 66 points.

<p.Minnesota has failed to cover in three if its last four games closing as an underdog while losing by double digits in four of its last seven matchups overall.

At 6-9 SU in Big Ten play, one of the bright spots has been the play of Marcus Carr. The junior guard is averaging 19.4 points with 5.1 assists and 1.2 steals a game. Center Liam Robbins is adding 12.3 points and a team-high 6.9 rebounds.

The Golden Gophers are scoring an average of 74.8 PPG while shooting 40.3% from the field. That conversion rate drops to 29.1% from three-point range.

They have given up 72 points or more in each of their last four losses to basically match their points-allowed average of 72.6 on the year.

Inside the Stats – Minnesota Golden Gophers

The first matchup this season was never even close and Illinois is in perfect position to pull-off the season sweep both SU and ATS. These teams are clearly headed in opposite directions as the regular season continues to draw to a close.

I'm also leaning towards the UNDER in this game. The Fighting Illini have tightened up their defense during the current six-game run. I expect them to rely a bit more heavily on defense this Saturday playing on the road.