As the top seed in the West Region, the Gonzaga Bulldogs have been installed as a double-digit favorite over the Creighton Bluejays for Sunday’s opener in the Sweet 16.

Game time for this regional semifinal is set for 2:10 p.m. (ET) at Hinkle Fieldhouse and plenty of points are expected in this matchup, with the total nearing 160 points.

Creighton sweated out a one-point win in its tournament opener before playing to form in a more comfortable 14-point win against Ohio this past Monday.

Facing the best team in the tournament as a double-digit underdog is a major step-up in class for the Bluejays. I actually believe they are up to the task to keep this a 10-point game.

I also see the total going OVER with Creighton scoring more points than expected against the Bulldogs.

Creighton was able to keep pace with Villanova as the two best teams in the Big East this season. An ugly 25-point loss to Georgetown in the conference tournament final raised some early red flags. The Bluejays have calmed those concerns with their last victory.

Gonzaga has yet to be really pushed in its first two tournament games. It still covered some hefty spreads after slipping to 1-3 against the spread in its previous four games. Sunday’s game should never be in doubt past the first half but Creighton is still going to be one of the best teams the Bulldogs have faced in quite some time.

Creighton is 1-1 ATS with the total staying UNDER in each game. It failed to cover as a 7.5-point favorite in the tight 63-62 opening round win against UC Santa Barbara. The Bluejays easily covered the 5.5 points in the 72-58 win against Ohio.

The Bluejays are 4-2 ATS over their last six games but they have lost four of their last five games straight-up against a team from the West Coast Conference. They are 3-2 ATS in five previous neutral-site games this season.

Creighton is a team that likes to let it fly from beyond the three-point line, but lacks a big man in the paint. This was evident in the Big East Tournament, as Georgetown ran through Creighton with physical paint presence that led to three-point shooting.

It will be a tall task for Christian Bishop to guard Drew Timme down low, so it will be up to the Creighton backcourt (particularly on offense) to score at a highly-efficient rate. That's just to keep pace with the best offense in the country.

The Bulldogs closed as 33-point favorites in their 98-55 victory against Norfolk State. They also covered the 15.5 points in the 87-71 win over Oklahoma. The total went OVER 156 points against the Sooners.

Gonzaga is now 6-3 ATS over its last nine games. It has a SU 8-1 record in its last nine matchups against the Big East. The team’s overall record ATS this season is 14-12-2.

Not that Gonzaga can't hit the three-pointer, but its their weakness on offense. It will be difficult for Creighton to contain Timme, so look for Gonzaga to start from the inside-out. Gonzaga hitting three-pointers is just a cherry on top of the cake for the Bulldogs' offense.

This team is highly efficient because of its smart shot selections and ability to get to the rim. If Timme isn't winning the offensive battle down low, look for any of the Gonzaga three guards to be able to blow by Creighton's. The Bluejays don't have great defense, and are more than likely going to lose the rebounding battle.

Guard Marcus Zegarowski leads the team in both points (15.7) and assists (4.4) this season. He has combined to score 37 points with 10 assists in two NCAA Tournament games. Forward Christian Bishop has posted a pair of double-doubles as the team’s leading rebounder.

Forward Drew Timme posted a career-high 30 points in Monday’s win against Oklahoma. This followed forward Corey Kispert’s 23-point effort in the Bulldogs’ opening round romp over Norfolk State. Kispert is the team’s leading scorer this season with 19.2 points per game. 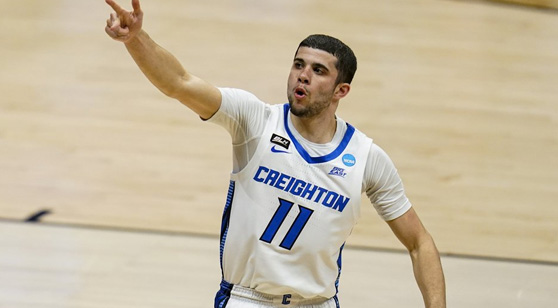 Creighton's defense has only allowed 60 PPG in the NCAA Tournament but a tough test will face the Bluejays on Sunday. (AP)