The Alabama Crimson Tide have been set as a solid favorite (-6.5) over the UCLA Bruins for Sunday’s third Sweet 16 matchup of the day.

Game time from Hinkle Fieldhouse is slated for 7:15 p.m. ET and TNT will be providing national coverage of this matchup between the Pac-12 and SEC.

UCLA has already overachieved in this tournament as a No. 11 seed and it's the only "First Four" bid to remain alive as we enter the second weekend.

Yet, you get the feeling that the Bruins are not ready to leave the Big Dance quietly. However, I have been equally impressed with Alabama’s efficient run to the Sweet 16.

Only one team gets to move on and while I have the Tide going to the next round with the straight-up win, I have UCLA covering against the spread with the six points.

It is going to take more than 70 points to win this game and that should create enough scoring overall to push the total OVER the current line.

The Bruins will be playing their fourth tournament game starting with the First Four win against Michigan State. They closed as underdogs in two of those three victories.

Having to step way up in class in this matchup may be a test UCLA ultimately fails but you already know that this team is going down swinging.

I had to check the calendar to make sure it still was not football season. However, behind a pair of lopsided victories, Alabama is proving that it also has a pretty good basketball team.

The current SU winning streak now stands at eight games with Monday’s win against Maryland. It should get to at least nine games counting Sunday’s contest.

UCLA closed as a 5.5-point favorite in its most recent tournament win against Abilene Christian in a 67-47 romp.

Much like the entire Pac-12, this team has flown under-the-radar all season long. Even with two big losses due to injuries, UCLA still has four capable scorers that can match almost anyone in the nation.

The scoring from Juzang and Jaquez has been terrific for the Bruins, but this team is just one foul troubled game away from being sent home, as the depth (especially down low) is thin at best.

Alabama opened this tournament with a 68-55 victory against Iowa but it could not cover the hefty 17-point spread. The total stayed UNDER 147 points.

The Tide did cover as six-point favorites against Maryland in Monday’s 96-77 victory. The total went OVER 138.5 points.

The total has stayed UNDER in six of Alabama’s last nine games. Yet, it has gone OVER in its last six games played on a Sunday.

The defense for Alabama is completely disregarded when talking about the team's strengths. The club ranks Top 25 nationally in defensive efficiency, which is mainly due to their high-rate of steals forced per game.

The three-point shooting and the high-scoring are the showstoppers for this team, but what earns this club's betting conviction (especially for this incredibly difficult tournament) is their defensive play.

Guard Johnny Juzang has been the team’s leading scorer this season with 15.1 points per game. With 17 points in Monday’s win, he has now eclipsed that average in all three NCAA Tournament games. Forward Cody Riley added another 12 points in that game.

Alabama’s leading scorer this season has been guard Jaden Shackleford with 14.3 PPG. He is one of four players averaging at least 11 points a game. He put up 21 points in Monday’s win over Maryland. Guard John Petty Jr. was next on the stat sheet in that game with 20 points. 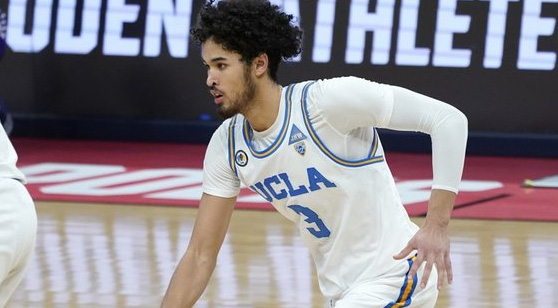 UCLA, one of the eight First Four schools in this year's tournament, has gone 3-0 both SU and ATS for bettors in the tourney. (AP)