The first game of the Final Four tips off at 5:14 p.m. ET at Lucas Oil Stadium in Indianapolis, and it's a Texas two-step.

The Baylor Bears have had a little more difficult of a road than their Lone Star State counterparts, winning all four of its games by at least nine points. That includes a thrilling 81-72 win over Arkansas in the South Region final, covering for the third consecutive outing. The Bears defense has been strong in this NCAA Tournament, allowing just 60.3 PPG in the four outings while splitting the OVER/UNDER 2-2.

Many expected Baylor to be here, as they average 85.3 PPG to rank third in the nation, they're the No. 1 team in three-pointer shooting at 42.9%, and they ranked 13th in the country by hitting 49.7% on field goals. The Bears are one of just two No. 1 seeds left standings, joining Gonzaga, and they're heavily favored to face the Bulldogs for all the marbles. But first things first.

Houston hasn't been anywhere near as prolific on offense, but the Cougars have the defense to at least slow the Bears down. That will be the key in this game. Houston allowed just 57.6 PPG to rank second in the country, and they were No. 1 in the nation by allowing a 37.0% field-goal percentage. Opponents were hitting 27.4% against them from behind the arc, the fourth-best defensive mark in the country. 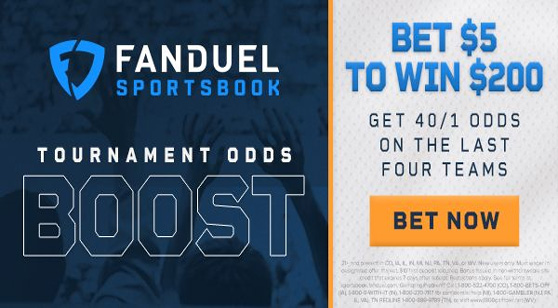 Baylor has done a great job adjusting to their opponent's style, succeeding and advancing. They weren't tested very much against Hartford in the first-round, posting a 79-55 win. Oddly enough, it's the only game of the NCAA Tournament which they failed to cover the spread. After Wisconsin thumped North Carolina in the first round, it looked like the Bears might be in for a stern test. However, they roughed up the Badgers 76-63 as a 6.5-point favorite as the OVER (136) connected, just barely.

The Bears were in for a dogfight in the Sweet Sixteen against Villanova. They entered as 7.5-point favorites, and they were on the short end of a 30-23 score at halftime. The Wildcats appeared to have the Bears on the ropes after an awful shooting performance by the No. 1 seed in the first 20 minutes. But head coach Scott Drew's squad adjusted nicely at halftime and outscored Villanova 39-21 in the final 20 minutes for an 11-point win and cover.

Last time out, Baylor had no such issues falling behind. They fired out to a 46-38 lead at halftime, and held serve in the second half against Arkansas, a team which mirrors Baylor in a lot of ways. They held out for their third consecutive cover, and now they get a battle of Texas against the Cougars.

Some might say that the Cougars have gotten lucky, becoming the first team in NCAA Tournament history to face four double-digit seeds to get to the Final Four. They coasted past Cleveland State in the opening round, 87-56, to cover a 20.5-point number. Rutgers gave them all they could handle, and had the Cougs on the ropes. But the Scarlet Knights just couldn't finish, and Houston grinded out a 63-60 win and non-cover.

In the Sweet Sixteen, the Cougars flexed their defensive muscle with a 62-46 win against Syracuse, covering a 6.5-point number. They were given a tough test against the red-hot Oregon State Beavers last time out, scratching out a 67-61 win as eight-point favorites.

Some will say that Houston has had an easy road, but they have faced a lot of upset-minded teams playing some of their best basketball of the season. So they're battle tested.

The Cougars haven't tasted defeat since Feb. 18 at Wichita State, rattling off 11 consecutive victories while going 7-4 ATS. That includes seven straight wins in the postseason, while going 4-3 ATS. A lot has been made about the double-digit seed thing, but they have had some quality wins during their 11-game win streak. They topped NIT Champion Memphis twice, and they also beat a very good Western Kentucky team, as well as Cincinnati twice.

Houston has not been a flashy team on offense, but the Cougars can run when necessary, so concerns about not being able to keep up with Baylor's up-tempo offense do not make sense. They put up 98 points on South Florida on Feb. 28, they rolled up 91 in the AAC Final against Cincinnati, and 87 in the opening round against Cleveland State. Yes, they have averaged 64.0 PPG in the past three games, hitting the UNDER in three straight, but that's also because the defense has allowed 61 or fewer in five straight games, allowing the offense to slow it down.

The Bears were dropped in the Big 12 Tournament against Oklahoma State by an 83-74 score. It might have been the best thing to happen to Drew's team. The setback didn't cost them a No. 1 seed, and it served as a wake-up call heading into the NCAA Tournament.

Baylor responded well against Hartford in a tune-up game against the 16-seed, winning 79-55 as 25.5-point favorites. But since, they have rattled off three straight covers. And the scary thing is that the offense hasn't really hit its stride at any point of the NCAA Tournament.

Baylor averaged 85.3 PPG this season to rank No. 3 in the country, and they were No. 1 on 3-pointers at 42.9% this season. But the Bears have averaged just 74.3 PPG in six games in the postseason. The scary thing is that the Bears could be on the verge of a breakout performance on offense to even out those numbers.

For totals, the OVER is 13-3 in Baylor's past 16 overall despite their power outage in the postseason, and they've hit the OVER in 13 of the past 16 as a favorite as well. The OVER is 9-3 in their previous 12 on a neutral court, too, while going 7-1 in the past eight following a cover. The OVER is also 12-2 in their past 14 after a straight-up win.

In the postseason, Houston has had a solid, yet unspectular offensive showing. The trio of Quentin Grimes, Marcus Sasser and DeJon Jarreau are each averaging double digits in seven games, with Grimes leading the way with 18.4 PPG. In addition, he has posted 4.6 RPG, 2.0 APG and 2.0 SPG while hitting 47.7% of his triples and 77.8% from the line. However, when the game is on the line, the ball is likely to be in Sasser's hands. He has hit 93.3% from the charity stripe in the postseason after knocking down 86.0% from the line in the regular season. Oh yeah, and that trio were the only three players to average triple digits in the regular season, so this is nothing news.

Baylor also has its own Big Three. Macio Teague, Davion Mitchell and Jared Butler have gone for 14.3 PPG or more in each of their six postseason games. Again, like Houston's top scorers, this is nothing new, as these three also were the only three to average double digits in the regular season. Teague is the guy to watch late in the games, hitting 83.6% from the free-throw line to lead the team. If Baylor has an Achilles' heel, that's it - free-throw shooting. But Teague is the best of the lot, and Butler isn't bad, either. Mark Vital has stepped up with 8.2 RPG in the postseason after averaging just 6.3 RPG in the regular season.

Houston and Waco are separated by only 183 miles, yet this is the first meeting on the hardwood since 1995.

If you think that's crazy, it's even more so considering Baylor has faced Hartford, their first-round opponent, a total of three times since the 2009-10 season. 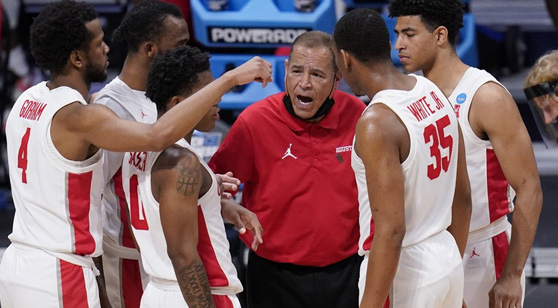 The Houston Cougars have been dominant on defense in the NCAA Tournament, holding opponents to 55.8 PPG in the event. (AP)