Since the PGA Tour flipped over to it's new season I've talked about how there have been some relatively weak fields overall in terms of having a lack of name brand players quite a bit, but some of those fields could look like a Major field in terms of quality compared to what we've got this week for the Bermuda Championship. That's not necessarily a bad thing as someone's still got to win this tournament, bets will still cash across the board, and adding to your bankroll is still the goal no matter what event it is.

This is the first of four events left in the Tour season before the calendar flips to 2022, and it's not likely we see any great fields the rest of the way. So if saving your units for ammo elsewhere or even later in the golf season is what one believes is most comfortable to do, then do it. That's never a bad option for a betting card in any sport, but let's see if we can't at least put some money in our pockets this week.

t's a rarity to see a sub-7000 yard golf course for any PGA Tour event (outside of Pebble Beach), but that's what we've got in Bermuda this week as the lack of length really opens up the field to everyone. Length could still be considered somewhat of an advantage, but this track is all about accuracy, especially off the tee.

Guys need to play from the fairway this week to have the best chance at making as many birdies as possible, as this should be another overall scoring fest where the bulk of the field continues to go low. In the two years this tournament has been held, Brendon Todd and Brian Gay have taken home the title with scores of -24 and -15 respectively. So it's play from the fairway as much as possible, get those irons connecting with GIR's, and hope the putter gets hot.

Both of those past winners could be categorized as two players who's strengths in their game is with the flatstick, but they've combined that with great driving accuracy overall and weren't priced out of this event because they are also two of the shorter hitters off the tee on Tour. Accuracy over length is what this event has been about in it's two years of existence, so you don't need to shy away from a potential selection this week just because they aren't very long.

There are only seven players currently priced below the +3000 threshold right now, with the Englishman Matthew Fitzpatrick (+1000) leading the way. He and Patrick Reed (+2000) are going to be the most recognizable names on the board for most this week, but in-between their two prices we've also got Christiaan Bezuidenhout (+1200) and Mito Pereira (+1600) as well. The other names at the top include Seamus Power (+2000), Hayden Buckley (+2500), and Chad Ramey (+2800). 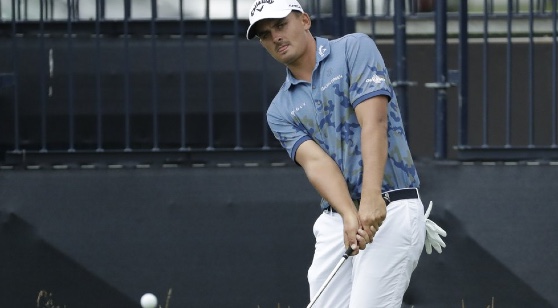 Christiaan Bezuidenhout has seen one Top 10 result during the 2021 PGA season so far. (AP)

Bermuda Championship Contender to Back

Bezuidenhout hasn't been a staple on the PGA Tour as he primary plays over in Europe, winning twice over there about a year ago (Nov/Dec 2020). His three career European Tour wins have all been by four shots or more as he's a guy that's quite strong with the putter and when it gets going he can really roll it in.

But he's also a guy that generally fits a similar player profile of the past two winners here as he's not the longest guy off-the-tee, but relies on all of his other skills to get his golf ball up and in the hole. His accuracy is not something I particularly question, especially in this type of field, and already coming in as one of the expected favorites, as long as Bezuidenhout plays to his strengths and just does his thing out there, I see no reason why he won't be a factor at the top of this leaderboard come the weekend.

Lipsky is another guy who's primary played most of his professional golf in Europe, which isn't the common path for an American golfer. But he went to the Korn Ferry Tour last season and is a graduate of it to gain PGA Tour status this year, as he's made quite a bit of improvement in the consistency with the putter.

Korn Ferry grads are guys that have to go low each and every week out there to take that next step, and Lipsky did just that a year ago. He finished 28th on that Tour in birdie average (4.23), and was 24th in driving accuracy (68.97%), two things that should bode well for him this week.

Uihlein has bounced back and forth between the two US-based tours the past few years (PGA, Korn Ferry), but he's another Korn Ferry grad from a year ago that actually finished that season tied for first in putting average (1.701). That consistent stroke with the putter helped him finish 1st in birdie average (4.63) on the Korn Ferry a year ago, and he did all that despite not exactly being the best in driving accuracy (155th) or GIR % (96th).

Those inconsistencies in the long game are a big part of why a solid putter like Uihlein is priced further down the board as he is, but he's also one of the few guys in this field that has also been a part of the Bermuda Championship in both previous years. That doesn't necessarily count for much, but it does count for something, and as a guy who does have some length – averaged 314.9 yards in driving distance on the Korn Ferry Tour last year – if he can throttle things down a bit this week and play to his strengths, I do believe we see Uihlein vastly outperform his current price point.

There isn't a whole lot to like statistically about Patrick Reed's golf game of late, but this does feel like a good venue for him to try and get things back on track. He's long been one of the better putters on the PGA Tour (4th in SG: Putting last season), and that alone should be able to carry him to some decent scores this week.

But this play is much more about the price for me as this +145 price tag on him seems like a bit of an overreaction to those recent struggles Reed has had with his game. Only Bezuidenhout and Mito Pereira stand between Reed and Fitzpatrick in terms of the odds in the outright market, and yet in head-to-head matchups with Fitzpatrick too, Bezuidenhout is at +105, and Pereira is at +115. Should there really be a 30-cent gap between the latter and Patrick Reed in a head-to-head with Fitzpatrick? I don't believe there should.