Congrats goes out to Hideki Matsuyama for his winning performance at Augusta last week, and you've got to wonder if that effectively frees Matsuyama up in big tournaments going forward. The pressure of getting that first one has been released now, and given that he had seven Top 10 finishes in Majors prior to last week's win, maybe some of those Top 10 finishes turn into another victory or two for Matsuyama going forward.

He's got a well-deserved week off this week though as the Tour goes to Hilton Head to compete for another jacket for first place. The Plaid Jacket has been a staple of the RBC Heritage for a long time now, as is it's connection to Harbour Town and the course's ability to really let Mother Nature dictate how the week goes.

Webb Simpson comes in as the defending champ and the favorite at +1100 after shooting -22 to win by one shot in June last year, in one of the first tournaments back from the pause. The later date for the venue might have had something to do with Simpson being the first winner since Brian Gay's 2009 victory here to hit -20 or better, as four straight years (2016-19) the eventual winner finished with scores of -9, -13, -12, and -12.

Things can get tough for guys to score well here if they aren't on top of their ball striking game, but at the same time, with winning scores like that, shooting 68 (-3) every day will likely have guys in the hunt as well.

Any post-Major fade angle on guys that make some sort of sense can probably be entertained this week as well, as I'm sure Will Zalatoris' name will pop up in those discussions this week. I doubted Zalatoris last week in a group play that he won when one of the names he had to beat was the tournament leader after the first two days. So I'll pass on stepping out against him this week, even though the spot does set up nicely to do so.

Accuracy matters over everything most weeks on Tour, but at Harbour Town where tiny greens and tree trouble are problems nearly every guy has to deal with here, being precise with the golf ball from tee-to-green is always going to be a huge strength.

Look at the defending champion in Simpson. He's always one of the best ball strikers on Tour, and that's generally been the case for all of the recent past winners here. Whether it's just been for this week specifically, or the better part of that season. Wesley Bryan's win in 2017 came in a season where he finished 32nd in Strokes Gained: Approach and was able to put/work around his driving issues that week to come out on top, in his first crack at Harbour Town no less.

That feat was matched by Kodaira the following year in his maiden voyage here, and when the last three runners-up at this event are Abraham Ancer, Matt Kuchar, and Si Woo Kim, the profile of a guy that can be precise in the approach game is a good place to start this week.

Kuchar's a past champion (2014) of this event as well, and with other names like Jim Furyk (twice) and Brandt Snedeker, the approach game and putting are key stats to target.

Finally, even on good scoring days here, the trouble that lurks everywhere tends to always find ways to trip guys up and keep scores relatively in check. The bombers are going to have the make the most of their length on the Par 5's because everyone's going to have chances at eagles there, and knowing where to miss (like Augusta) can be highly advantageous on certain holes here as well.

The small greens always end up getting a lot of attention at Harbour Town, so keeping those up-and-downs as simple as possible to keep a round moving forward could be what separates guys in the end.

It used to be an event where some sort of past course history was considered necessary before Bryan and Kodiara blew that up in consecutive years. Both guys were lights out with the irons though and that's where everything should start. 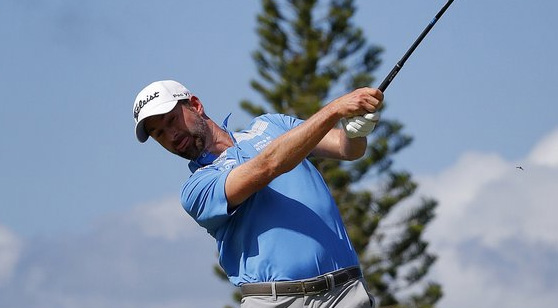 Webb Simpson captured last year's RBC Heritage and he's expected to be in the hunt again this weekend from Hilton Head. (AP)

Defending champion Simpson (+1100) comes in as the slight favorite over Dustin Johnson (+1250) as the World's No. 1 golfer has yet to crack the Top 15 in three tries here the past three seasons. DJ's got a 16th, 17th, and 28th in there so he's been far from bad, but to have him not priced as the favorite is somewhat noteworthy.

Tough to argue against DJ having the game to win here, and it's not often you don't have him priced as the favorite, let alone in a field where most of the big names are absent. Couldn't fault any DJ play this week, as the only other name below +2000 this week is Patrick Cantlay (+1700).