We were able to get the Eastern Conference side of things for the NHL's restart tackled, so it's on the the Western Conference angles. The West is arguably the deeper conference from top to bottom, and it's been a war to come out of this conference and play for a Stanley Cup for all the recent Western Conference teams to do so. In this alternate format, things may be even tougher in that regard, so you'd better find a team that is not only talented, has the mental toughness to grind their way through this entire process.

Teams “tapping out” after a winning round or two is definitely a possibility given the outside scenarios involved with how this year will finish – guys might get sick of daily testing, isolation etc – and the Western Conference is where could come more into play for teams that maybe fall down 0-2 SU in a later playoff series or something.

All of that is down the road though, as for now we've got to start by breaking down these play-in matchups and it starts in the West with the #8 vs #9 contest between two Canadian teams. 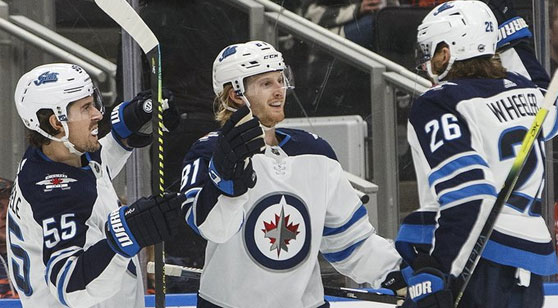 The Jets knocked off the Flames in their lone regular season meeting in overtime back in October. (AP)

This is definitely not the the way Calgary pictured their potential redemption in the playoffs playing out, but after losing in the first round a year ago after finishing with the best record in the Western Conference, the Flames have been anxious for another chance at post-season hockey all year long.

Calgary hasn't had the same results during the regular season this year to currently sit in the 8th seed, but the bulk of the core from last year's team still remains, and when you are looking for different results, maybe a completely different format and experience like this year's playoffs will be for everyone isn't a horrible thing.

And just because the Flames don't have as good of results in the standings as they did a year ago, it doesn't mean they are a far worse team. In fact, the Flames are well above league average in numerous advanced team analytics and have actually one of the worst “axDiff” in the league at -19. That number compares expected goal differential with actual goal differential and the bigger the negative number generally means said team has been quite unlucky over time.

Now, there could be rough shooting (not finishing scoring chances) and/or bad goaltending as part of that equation as well, and without question Calgary has suffered from both of those afflictions at times this year. But they've had plenty of time to iron those things out, and if bounces start going their way, this team – one that's core was best in the West just last year – is probably very undervalued at any level of the futures market.

Bad goaltending has been an issue for Calgary this year, and if it happens from the outset here, the Flames won't be long for the stay in the bubble. That would go further to prove why they sit with the 8th seed in the year and an bettors backing this squad will have kindling in a hurry. These prices suggest the Flames are one of those teams that are who they are at this point of the season and that's an 8th place team, but based on the talent they've got and what that talent did through 82 games a season ago, I'm not sure that's a line of thought I can agree with.

Which means, Calgary is one of those teams I'm strongly considering for some futures money in the series and conference for sure. They ended the year having gone 6-4 SU in their last 10 games, but three of the four losses were all by a single goal, and three of the four of them came to teams that currently sit in the Top 4 of each conference (Vegas, Tampa Bay, Boston). Those defeats are nothing to be ashamed about, and suggest that this Calgary team was finding it's identity at the break.

Clearly things won't be able to be “picked right up” again for these guys, but they are a squad that's definitely got a lot of potential in this post-season.

Winnipeg had been playing some solid hockey themselves, as they went into the stoppage on a four-game winning streak overall. Yet, even still, this is not a team the overall betting market things all that highly of, considering two of the other Western Conference teams that are seeded below Winnipeg at #10 and #11 (Minnesota and Arizona) each have better odds to win the West and the Cup. Some of that would speak to individual matchups out of the gate, but all year the Jets looked like a team that would be a coin flip to make the playoffs in a regular campaign.

Neither of those prices is all that attractive from a betting perspective, although if you were to put some futures support behind this team, starting and ending with winning the Cup might be the way to go. You would have a much bigger potential payout for winning just one more series, and the physical, bruising lineup and style of play Winnipeg prefers to use could be ideal for going through this type of post-season gauntlet.

Talking about the Jets potential to go all the way does feel like a little bit of reality has escaped, but really, who knows how the rest of this year will play out. However, this team is still going up against a #8 seed that's probably not a true #8 seed by any means, and doing so without and potential home ice advantage. Underdogs in the NHL playoffs thrive on winning at home and then putting all the pressure on the favorite to do the same, and the Jets have had one of the best home ice advantages in the league the last few years. Take that away from an already mediocre team, and this year's playoffs likely won't be long for Winnipeg.

Only one head-to-head meeting between these organizations this year, and we are far closer to the one-year anniversary of it then it just finishing. A one-game NHL sample that was going on 10 months ago by the time things start up again is about as useless as head-to-head data can get in the handicapping process, so there really isn't much to discuss.

If you've gotten this far in the piece, it's pretty easy to tell from the tone of it which team is getting the support to move on, and it is my favorite series wager in the entire play-in round.

Calgary is getting priced like their official 8th seed standing, when all it really would have taken for them to be in that Top 4 group here was a few more bounces to go their way, and some consistent, league average goaltending on a nightly basis. A lot easier to ask for that on paper, but that's how close this team is to resembling the one that was the #1 seed in the West a year ago.

With redemption for last year's unceremonious ending being a motivational tool I expect this Flames team to tap into, I think we are getting the far superior team severely under-priced. Obviously anything can happen and the Flames can fall flat early and never recover, but last year's playoff results do serve as a strong reminder even in this case to not let that happen.

Some sharper goalie play and a bit more positive puck luck in this restart, and the Flames could turn into that Western Conference team nobody wants to play in this post-season. At a -125 price for them to get through, it's pretty easy to back them to do so.