The final Western Conference 'play-in' series to discuss is the #7 vs #10 matchup between the Vancouver Canucks and Minnesota Wild. For both franchises it's been a few years since either of them found postseason success, and it will be interesting to see just how far the winner of this series goes.

They've got to determine a winner first though, and the Vancouver Canucks, who were close to playing this series on home ice, are slight favorites as the higher seed. Can this new generation in Vancouver get that first taste of postseason success, or will this Minnesota team that was on a solid surge before the stoppage pull off the upset? 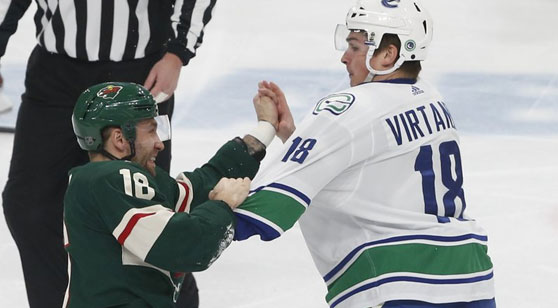 The Wild took two of three meetings from the Canucks this season as the two squads duke it out in the qualifying round. (AP)

The Canucks are a team that fits the general idea of what you'd expect a typical #7 seed would be in most cases. A team that's trying to find their way to get to that next level, but probably about a year or possibly two away. Any postseason experience can only benefit the young core the Canucks have these days down the road, but that's referencing years, not them winning it all this season.

Vancouver's futures numbers are really easy to ignore in the sense that they'll need to catch scorching hot fire to make a run where either of those options have a chance to pay out. They can get by Minnesota, and maybe even beat whomever they'd run into next, but the West is too good to seriously consider Vancouver.

Some Canucks fans are probably thankful they'll get to see their team playing playoff hockey at all, because the way Vancouver was playing before the stoppage was far from good. They were 6-11 SU since February 2nd, and 10 of those 11 losses saw Vancouver give up 4 or more goals each time.

Even in Vancouver's six wins their opponent scored 3 or more goals four times, and you play with that much fire in your own end on a nightly basis and we may have seen the Canucks slip out of the playoffs all together had the season continued on as planned. All this time off has given them plenty of time to think about how to correct those leaks in their game, but until we see them play, it's hard to really trust taking the Canucks here unless you believe they'll be on the right end of a potential high-scoring series the whole way through.

In terms of considering these futures prices with the Wild, it's pretty easy to not consider them either. They had actually been playing some strong hockey prior to the stoppage, but unless G Devan Dubnyk gets scorching hot and maintains it the entire way through like he did a few years ago, Minnesota's in a similar boat to Vancouver. There may be a series win or two in their future this year, but that's likely where the success stops.

Had it been Vancouver or someone else in the West who started to really slip had the year continued, Minnesota was right there waiting to take that spot. The Wild had won eight of their last 11 games before the stoppage, and had at least a game in hand on many of the teams they were trying to chase down.

None of that is guaranteed to carry over to the restart though, and they are already the worst of any Western team coming back to restart things in goals allowed this year with 217. Not being able to keep the puck out of your net plays right into the Canucks hands, so I'm not sure the +100 price is enough to warrant that risk with the Wild.

The two teams split the first two meetings and went the distance in the 3rd to borrow a combat sports phrase, so the coin flip nature of how this series looks and feels is basically how it played out in the regular season.

The one thing to notice here though is that you'd better expect to score at least four goals if you want to assure a victory when these two teams meet up, and that idea fits the profile of both squads.

This is not a series I really want any part of in terms of picking a winner, as it feels like a series where it's either going to be decided by a couple of bounces or two, or quite simply the team that finds their scoring touch first. It really is priced quite right given that notion, and for the sake of making a pick to keep consistent with the other series I've previewed, I'd go with Minnesota only because they are plus money. I'd always take the plus money in that spot.

How I do plan on attacking this series though is to look at the 'overs' on an individual game basis. Chances are we see plenty of goals scored in this series if these teams do end up completely resembling the ones from the regular season, and I do think that will be the case.

The more these two teams got used to one another playing those three regular season games in about a month saw the total goals allowed increase by one in every game, so I do expect 6+ goals to be the norm for these two squads for however long they play.