As the Western Conference 'play-in' preview's continue, it's on to the Edmonton/Chicago series. This is another matchup similar to what I discussed in the Pittsburgh/Montreal series in that Edmonton did get the short end of the stick in having to play in these play-ins, because the Oilers were sitting comfortably in 5th place in the West, and had Dallas played an equal amount of games to Edmonton (and lost those two games in hand), it would have been Dallas in this spot and Edmonton would be in that round robin of the Top 4 teams playing for seeding. It is what it is though, and the Oilers just have to prove they are the better team in this series and simply survive and advance.

It won't be easy though, as Chicago's got plenty of playoff experience in their core talent, a handful of whom have won three Stanley Cups already in this year. Salary cap issues forced the Hawks to go into more of a retooling mode the past few years though and they've dropped off in the standings because of it.

With just 72 points through 70 games, it was highly unlikely that Chicago would be playing post-season hockey as it was, and now that the got the gift of a second life this year, it's guys like Jonathan Toews, Patrick Kane, and the rest of that Hawks team are going to want to make the most of it. Their overall talent was a 12th place team in the West, so it's not like they were a phenomenal team to begin with. But the argument is definitely there that Chicago is a 'live' underdog in this series based on the new life they've gotten and the overall format of this restart. 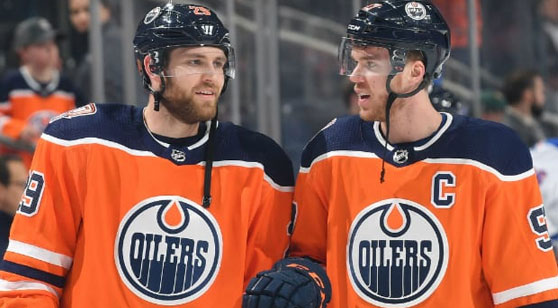 The Oilers have plenty of star power but lost two of three meetings with the Blackhawks this season. (AP)

In terms of futures value on the Oilers, the fact that they did sit in 5th and not 4th in the West actually presents an interesting way to look at their long-term prospects. I mentioned earlier that had things worked out just slightly different between Edmonton and Dallas before the stoppage, Edmonton could have been that 4th seed that Dallas is and not worry about having to deal with this veteran Chicago club.

But what makes that really interesting is that Dallas is listed at +600 to win the conference and +1500 to win the Cup, five and eight points lower respectively then Edmonton's price. That's a little hard to ignore given the circumstances, but it also goes to show you how much influence these sprint-type five-game play-in series have on the overall perspective of clubs. Even the best teams can fall in a five-game set in normal circumstances, let alone the one we are dealing with this year.

That being said, if you like Edmonton to get by the Blackhawks, looking ahead to backing them in these futures markets does make quite a bit of sense.

At the time of the stoppage, Edmonton probably felt they were a bit too streaky – on both sides of the coin – to be completely confident that a long playoff run could happen. Edmonton dropped three of their final four games of the year – including a 4-3 loss at Chicago – but they had won three straight prior to that. Yet, it was a 1-3 SU stretch prior to that three-game winning streak, so a 5-5 SU record over their last 10 games definitely doesn't tell the whole story. The bigger picture for this Edmonton team this season though, is that they go as the supporting cast behind Leon Draisaitl and Connor McDavid.

McDavid is considered the best hockey player in the world right now, and he didn't even lead the Oilers in points this year, that was Draisaitl. In fact, Draisaitl led the entire NHL in points this year and was awarded the Art Ross Trophy for his efforts.

But having two great players is far from a guarantee of success in this league, and if Edmonton is going to make a deep run in these playoffs, they'll need their two superstars to do plenty of the heavy lifting, but more importantly, they'll need plenty of help from the rest of the club from top to bottom. When Edmonton struggles with secondary scoring and getting even average goaltending, that's when those losing streaks happen for this club, and with only three games guaranteed for them here, Edmonton can't afford for that to happen out of the gate.

No surprise here that Chicago's got the worst odds of any Western Conference team in the futures market, as they really are quite lucky to be here. There likely wasn't going to be any playoff hockey for this team had the regular year been fully completed, and based on record and play, Chicago being the biggest underdog makes a lot of sense.

Underdogs will hit when things get going again, and Chicago could end up getting by Edmonton in this series. But bettors still can't lose sight of the fact that this Chicago team really is what their record says they were this year – they did play 70 games – and their futures prices are this high for a reason. Even with the Stanley Cup experience Chicago has, backing them to run through the entire conference or beyond should be treated as nothing more than a lottery ticket.

Chicago did have that win against the Oilers right before the shutdown, and did post a 6-4 SU record in their final 10 games. However, just zooming out to their last 20 games, Chicago put up a 8-12 SU record and has a loss to Edmonton in there as well. All that goes to show you is that this Chicago team completely fits the profile of a #12 seed, and as positive as the talking point of their record in their final 10 games can appear, it does nothing in terms of telling the home story.

But, that championship experience inside that Hawks dressing room is a bit of an x-factor, and for some it will boost the profile of this team. How that transforms into on-ice results is up to individual interpretation, but it probably should be considered more of a worry for Edmonton backers.

Chicago winning the season series is another concerning factor for Edmonton backers, but head-to-head results are just a very small piece of the pie in this equation. What may actually be more concerning for Edmonton backers is that Connor McDavid played in both of those losses to Chicago, but wasn't available in the win. Obviously that works both ways here in that it could be a huge positive for Edmonton, but the season series results go to show you that Chicago can be considered a very live dog in this series.

Chicago should be able to make things tough for Edmonton, but in the end I do believe it will be the Oilers going through. They proved they are the better team this year overall, and I actually think that their goaltending will be better then most will give them credit for in this series. Mikko Koskinen and Mike Smith were starting to find more consistency in their games down the stretch – Edmonton allowed 4 or more goals in just five games since the start of February (20 games) – and with the offensive firepower Edmonton has up front, they'll always have a great chance to win if their opponent is held to three goals or less.

Furthermore, as much as the arguments can be made for Chicago's upset potential, they are still -167 favorites in the series. That price is cheaper then what the Penguins are laying which speaks to the Chicago threat being more dangerous than Montreal, but it also presents favorable opportunity to take this Edmonton team at a cheaper price in the identical matchup seeding-wise.

Anything can happen in a five-game set, but this Oilers franchise is one that's got way more better days ahead of them based on their core, while Chicago's core has most of their better days already pinned up in scrap books and memory banks. The Blackhawks won't be the easiest of outs, but with the best player in the world wearing Oilers colors, Edmonton advances.