The format for coming back was never going to please anyone, and the teams it probably bothers the most are the ones that were situated in battles for the 4th, 5th, or 6th seed. These teams were virtually assured a playoff berth at worst, and now they are having to be involved in a “play-in” series against a team that probably wasn't going to be around that long. Definitely stings from that perspective, and sadly for the the Pittsburgh Penguins and their fans, that's the perspective this team faces when things return.

Not only that, in short series like these first ones will be, all it takes is for a goalie to get hot for a week or so to carry the “worse” team to the upset. And Pittsburgh's playing the Montreal Canadiens to open things up, a sub-par team overall, but one with one of the best goalies in the world in Carey Price. That's as prime of a candidate as their is to steal a series with a mediocre squad in front of him, and the Penguins probably do deserve a bit better of a fate.

All that being said, Pittsburgh is the better team in this matchup, is priced like it, and should win. However, the problem is more then just the theft ability of Carey Price, as who knows if the Penguins can get things started right off the hop. A poor opening game, followed by Price stealing one, all of a sudden has Pittsburgh on the brink of elimination for something they never thought possible for the entire year; missing the playoffs. 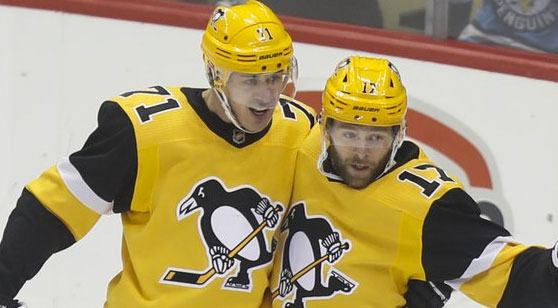 The Penguins are listed as heavy favorites against the Canadiens to advance past the qualifying round. (AP)

On paper, there is plenty to like about backing this Pittsburgh team both in this first series, and long term in the playoffs. They showed all year they are one of the better teams in the East, and could come out playing great hockey right from the outset. But that doesn't take away from the idea that they did get part of the worst end of this format for returning, and knowing what's ahead of teams who make a deep run, Pittsburgh has tasted plenty of success before and may decide to punt on all this abnormality.

Either way, from a betting perspective, it makes Pittsburgh a tough team to confidently go against, or confidently back until you maybe see them in action for a little while. It might only take a period or two to really show where Pittsburgh's motivation levels for this whole ordeal may be.

Pittsburgh went into the layoff sitting in 5th in the conference, but just four points out of the division lead. That's how good this team when things were rolling and normal, but most of that damage was done prior to those final few weeks of the season.

This Penguins team was actually leaking a bit of oil over the final month of play, going 3-8 SU over their final 11 games, beating only three teams (New Jersey, Buffalo, Ottawa) that weren't even good enough to be invited to the restart of the year. No way that form has any bearing on how this Penguins team returns, but it does make it tough to consider backing them as the better squad.

The argument for backing Pittsburgh in this series is that the other option is Montreal, and the actual playoffs were nothing more then a pipe dream for this team had the year continued on as is. But they get to come to the restart as the #12 seed, worst in the conference, and have the worst odds of any Eastern Conference team to win their series, win the conference, and win the Stanley Cup. They don't deserve to be here, but they are, any anything can happen for any team in this kind of format.

Montreal had lost three in a row and were sitting 10 points out of 8th place when things were stopped, so this return to play is definitely a second chance at the season for Montreal. If the players view it like that and are able to take advantage of the opportunity, all the better to them, but any long term futures for this team should be completely scrapped at this point. The team just simply isn't good enough relative to their competition.

Montreal is a team you've got to take on a matchup by matchup basis, as connecting on them winning a series or two could bring solid, and likely the only profits Montreal will provide when things get going again. Montreal is one of those rare teams where backing them in the short term is where the profits are to potentially be had, and you'd better believe Carey Price will be dominant again and/or the Penguins appear disinterested to confidently submit that series wager to start.

Based on that season history between the two, you can see how tough of a matchup the Montreal Canadiens can potentially be for Pittsburgh. The two teams traded 4-1 wins with Pittsburgh winning the coin flip OT game. If that's how this series were to start with Montreal getting that bounce in an OT win, all of a sudden the heavily favored Penguins are on the brink of elimination and respond with a 4-1 win in Game 3.

That's clearly just one scenario, but it emphasizes the idea backing the Penguins is extremely tough to do here. I'd much rather lay off Pittsburgh this round, see them advance and then back them in what will at least be a seven-game set, and potentially a better stylistic matchup for Pittsburgh.

This is a series where it's tough to concretely stand behind a prediction on either side. On one hand you've got a Pittsburgh team that's feeling slightly and maybe not interested in staying long because of it, while the other side leaves you with a Montreal Canadiens team that simply does not deserve to continuing playing hockey this season.

I think the only way to back Montreal is if you firmly believe they'll make the most of their second chance at 2019-20, and that Price will steal at least one game on his own. And even if that's the case, it may be better to try and get in and get out with a single game ML Montreal bet early on in the series.

As long as Pittsburgh shows interest in potentially making another long playoff run, they'll be the ones who win this series. It may end up being tougher then a 5 vs 12 matchup may suggest, but with no March Madness played this year, every bettor who loves to tout those upset numbers by the #12 seeds in March has another angle to hold onto here.

If Pittsburgh's interested, they are winning, even if it takes them a game or two to get interested in the end. This series is one where trying to pick off a Montreal ML individual game play makes a lot of sense, but without strong knowledge of how either team will react really, you've got to believe the better team in this matchup disparity moves on.