The official terminology on what the NHL is calling their return to play isn't really important at all, as the best thing about any of it is the fact that we'll have action back on the ice soon. Even with all the teams sectioned off at two neutral sites and the initial headaches that may bring to some handicappers, it's the same for every one of the teams involved, and it's not like bettors can't look to make some early adjustments if need be.

These initial series have some intriguing story lines across the board, especially since some are matchups you'd never see this early in a post-season in the usual format. That can be viewed as potentially a good or bad thing depending on the team you are talking about, but it should be predominantly a good thing for at least one team out there, and it's there series that kicks off these previews. 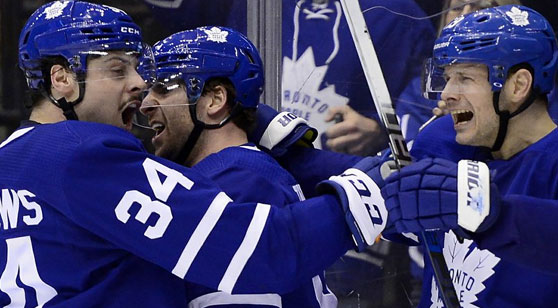 The Toronto Maple Leafs are listed as a substantial favorite against the Columbus Blue Jackets in the qualifying round. (AP)

Toronto is a team that's yet to have their young core of next level talent experience playoff success in their brief NHL careers, and the reason(s) for that are mainly two-fold.

One, Toronto's always had trouble keeping the puck out of their own net these past few years, and it's burned them in at least one playoff game in every first round series that they've dropped the past few years. They made it a priority need of improvement in the 2019-20 season, and while it's still a work in progress and the break did it no help, it's something the Leafs are more then comfortable living with.

The second main issue behind all those first-round defeats for Toronto recently, is actually the usual playoff format itself and the division they are stuck in. The Leafs have been looking up at Boston for years and have still yet to surpass that hurdle. But with the way Tampa Bay has turned into a league powerhouse the past few seasons, Toronto's path to success in the playoffs was always one of the toughest. Repeated losses in those first round series makes some question whether or not this Leafs team will break through, but if there ever was an ideal time to do that for Toronto, this would have to be it right?

This alternative ending to the year gives this Leafs team a great opportunity to get that first series win under their belts – whether they officially call it playoffs or not – and who knows what kind of confidence guys like Auston Matthews and Mitch Marner build from there.

Toronto enters this round with three more wins (36) then Columbus in the same amount of games played, and do deserve to be the significant chalk in this series. Sloppy defensive play out of the gate could bury the Leafs from the outset though, and this was a team that was prone to that mistake even when they were practicing every day, let alone having multiple months off. Which Toronto team on defense shows up early could tell you a lot about where the Leafs may be headed this summer.

The Blue Jackets have the 2nd worst odds to win the East and 3rd worst to win it all of all the returning teams, so that should tell you a lot right there. This franchise shocked everyone when they swept away the President's Trophy winning Tampa Bay Lightning in Round 1 a year ago, but that unit on the ice was also a lot more talented then the one Columbus has this year. Keep that in mind when you do see that under the normal scenario, this would be a #8 vs #9 matchup in theory.

The big prices on Columbus to make a deep playoff run, and them being underdogs at the price they are to Toronto in the series, tells you that this probably isn't your typical 8 vs 9 contest as it would suggest on paper.

Those that believe in this Blue Jackets team have to view the layoff as a good thing, as this team was really struggling for awhile before the break. Columbus had lost 12 of their previous 15 games at the time, and while there was some bad luck mixed in there with six losses in extra time, it speaks to the overall direction this franchise was going.

They were treating this year as a bit of a sell-off year after losing what they did in free agency last summer, and had the season continued on as normal, Columbus would likely not be involved in post-season hockey.

The two teams officially split the head-to-head games this year, but both were in the first month of the season, long before Columbus started to see the writing on the wall for their franchise. Not a whole lot you can take from those games other then the winner should expect to put up at least three goals, and over the course of an entire series, that edge has to be given to the Maple Leafs.

No need to really overthink this one, as even in a situation where there shouldn't be any advantages anywhere outside of the talent on the ice, Toronto getting to avoid going through their own division in the early rounds of any post-season play is a huge opportunity that's too good for them to pass up. Toronto is head and shoulders the better team here, and as long as they don't play like buffoons defensively, that first post-season series win should be theirs for the taking.

Columbus won't be sneaking up on anyone this year, and I don't believe they've even got the talent to pull off a similar feat to what they did a year ago. Even if this were a series where the teams had their typical home and away games, the end result still feels the same in that Columbus will likely be able to take just a single game.