Half of the bracket in the Eastern Conference may have two chalky favorites in series involving Canadian-based teams, but the other half of the bracket belongs to hockey fans in New York. Both the Islanders and Rangers are involved in the other two play-in series, but the only one of them laying chalk in their respective series is the team from Long Island.

The Islanders are squaring off with a Panthers team that was sitting 10th at the stoppage, but based on the price put out by oddsmakers, they view this as a contest much closer to one that is more associated with a #8 vs #9 contest for those who may be more familiar with seeds. It' makes for an interesting handicap to say the least. 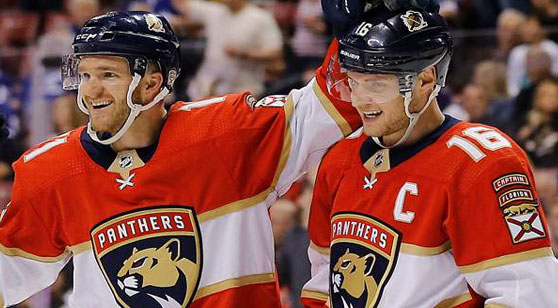 The Panthers lost all three meetings with the Islanders this season but look for revenge in the qualifying round. (AP)

The Islanders may be the only New York team laying a price in their opening series, but in terms of futures odds, Rangers fans can take solace in the fact that there is no difference in price between the Islanders and Rangers to win the East and/or Stanley Cup.

Which does make backing any futures with the Islanders rather tough to do right now, considering it's viewed as something of a coin flip they even make it to the next stage. They've got a goalie in Sergei Bobrovsky who's known to get scorching hot for sustained periods of time, but even if that ends up being the case, the entire team in front of him is going to have a tough time running the gauntlet all teh way to at least the Stanley Cup Finals.

From a performance perspective, the stoppage probably couldn't have come at a better time for the New York Islanders. They were doing nothing but sliding in the standings having lost seven straight, hanging on to their playoff spot because points were still earned with four of those defeats coming in extra time.

All this time off to regroup has to be viewed as a good thing for the Islanders in that regard, as who knows if they'd be even playing playoff hockey had they continued down that path. If seeing the Islanders struggle in all those games is the lasting memory of this team for you, it is going to be hard to get behind this team, but sometimes a second chance is all a group needs.

If you can't really consider backing Islanders futures because of the coin flip nature of their first round series, the same has to apply to their opponent. Florida's never going to be a team that scares anyone on paper, nor is that roster going to invoke tremendous confidence in bettors willing to get behind this squad.

They've got the roster built to pull off an upset or two in an unprecedented format that these guys are in, but it would take a lot for them to really be considered 'live' in either of those futures options.

The Panthers had won two in a row before play stopped, but their record in a more long term record was was just .500 at 6-6 SU in their last 12 games. They did see Bobrovsky go down with injury at the start of March though, and with him likely fully healed now, it does give the Panthers a nice uptick. They are a team that will go as far as their goaltending takes them in this format.

As you can see from the head-to-head history this year, the Islanders managed to sweep the season series with the Panthers, and did so on the strength of their defensive play. Florida never got more then two goals against them in a single game, and in today's NHL that's not going to win a lot of contests.

But those games were played a very long time ago, and the Islanders have really only slowly slid downhill since 2020 began. The series price being as tight as it is suggests that head-to-head history means next to nothing here and it's hard not to agree with that.

In series that are going to be projected as close and treated like a coin flip in the markets, it's going to take some pretty strong reasoning behind looking to back the favorite in that scenario regardless of the specific situation. Losing seven straight months ago means nothing now, but it could also be a snapshot of minor issues and deficiencies that this Islanders team had been covering up earlier in the year.

There simply is no convincing reason to get me to back New York in pursuit of a series victory, whereas Florida's argument lies in their goaltending being the more trustworthy unit in my view, and it's ability to affect a short series like this.

Getting swept in the regular season series may mean little from a handicapping perspective, but chances are those Florida players will be reminded about it before they hit the ice. I'll be of the belief that as professionals they'll want to do their best to rectify that situation as best they can, and what better way then to beat New York when it matters the most.