The last of the Eastern Conference playoff 'play-in' series deals with the team everyone was talking about over the last month of NHL play, as there weren't too many teams hotter then the Rangers before the league stoppage.

The Rangers ran roughshod over all of their opponents during February, and because of it they played themselves back into playoff contention. Yet, at the same time, nothing likely kills momentum like that better then a three-month world stoppage that this last little while has been, and asking or expecting the Rangers to come out of the gates playing that high level of hockey again seems to be a bit big.

But that end to the regular season has made the Rangers a popular underdog in this first round matchup and the futures markets, but does it make sense to follow along? 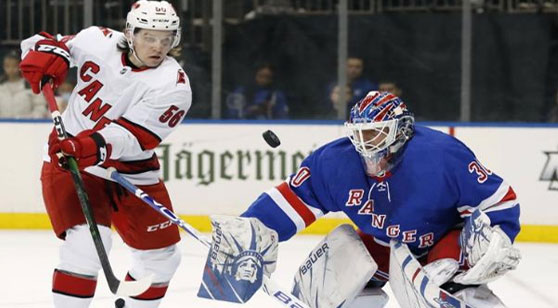 The Rangers shut down the Hurricanes this season by taking all four meetings from their divisional rivals. (AP)

At the time of the stoppage, Carolina was doing what they could to tread water in their current playoff positioning, as there was just an overall lack of consistency in play. Four-game losing streaks were followed up with three game winning streaks, and while those can be great to ride as a bettor throughout the year, you are doing so knowing a great deal about their current form. That's not the case here, and it makes it tough to full trust or fade the Hurricanes.

From a price perspective, they've got the same price to win the Stanley Cup as their opponent the Rangers is tagged with, identical to the Islanders as well. Yet, Carolina does hold a two-point edge in the conference odds at +1800 compared to +2000 the other way, and that does suggest something about their being some potential longer term benefits backing this team.

As mentioned earlier, Carolina's final seven games before the break began with a four-game losing streak, and concluded with a three-game winning streak. Being streaky like that and winning or losing three-plus games in a row was how the bulk of the Hurricanes season went for the most part, and in this revised format, there are obviously some severe pros and cons to that result pattern.

Should Carolina open out of the gate with the form that earned them those multi-game losing stretches, they'll be out in a heartbeat here, but the same can be argued for them moving on to the next round if the Hurricanes are the team that goes on to win three or four in a row.

As a bettor, that's probably the question you've got to ask yourself regarding Carolina's backing potential. Do you believe they'll be on point, or well off it out of the gate, because you're not going to have time to decipher that waiting for them to play a game or two. Picking a stance on that question is where many of the pre-series action will come from in the market.

If you subscribe to the belief that any time off for a team that's playing well is generally a bad thing, then going against the Rangers is something you may want to consider. The Rangers had started to cool off a bit right as the month of March hit with a 2-5 SU record in their last seven games before the stoppage, but prior to that there was no one hotter then them in hockey, and that's the dominant memory of this Rangers team in the marketplace overall.

From January 31st until February 27th, the Rangers went 12-3 SU overall as they played themselves right back into playoff contention after some rough early months. That's about as streaky as it comes when you want about teams going on runs (both good and bad), and recapturing that magic three months later in an unheard of setting feels like quite a stretch.

That final full month of the season has many in the market place talking about the Rangers as a potential dark horse team to make a run at things this year. That's definitely possible as they've got the talent on the ice to do so, and proved it by running through the league for a month relatively unscathed.

But we can't be so quick to forget about those first few months of the year that the same guys on this Rangers team played as a unit, and the poor record they put up in that time. Anybody can get hot for awhile, and while it does take a relative “good” team to get as hot as the Rangers did for a month, that's nothing but a distance memory right now three months later.

A quick series like this opening round could be one where the Rangers do find a way to stay relatively hot, but any Rangers support should start on a series by series basis before strongly considering other futures. Even in a brand new setup for everyone, the Rangers may not have the complete team to make as deep of a run as is commonly considered.

Not only do those supporting the Rangers quickly reference their dominant run through the league in February before the stoppage, the secondary piece f support for that case rests in the Rangers sweeping the season series with the Hurricanes.

Even early on in the campaign when the Rangers weren't playing their best hockey, they seemed to have Carolina's number. None of that is disputable, it happened, but heavily it should be weighed in regards to predicting future events is always up for dispute.

Sweeping season series is all well and good, but even in a normal playoff year that tends to mean next to nothing once the potential for one's season to be over is on the line. The Rangers find themselves in the same spot as their New York counterparts in that regard, as the Islanders won all three meetings with the Panthers this year, but just like my prediction in that series, I'm going with the other side to advance.

For one, the Rangers may have already cooled off a bit, but the stoppage came at the worst time for them, and them starting from scratch again just gives off the impression that the run won't be long. Remember, the counter argument to that spectacular February for the Rangers is that if you were to neutralize things and give New York a .500 record for the month, they might have not even gotten an invite to this restart of the year.

Carolina might be streaky in three and four game sets, but their run through a few rounds of the playoffs last year was priceless experience for this organization, and as the far better team, the extra prep time should be highly beneficial for them in this matchup.

The Rangers past run is always a nice talking point, but it's also caused their futures prices to be a bit overvalued across the board. Like the Panthers in that Islanders series, Carolina's going to know all about the fact that they dropped all four regular season games to this Rangers team, and they'll made amends for it in a hurry.