The Nashville Predators have had some strong playoff success in recent years, and they are up against an Arizona franchise that hasn't been involved in playoff hockey since the 2011-12 season. Bettors that love to play the experience angle will have no problem shying away from the Predators in this series, but will that be the end result? 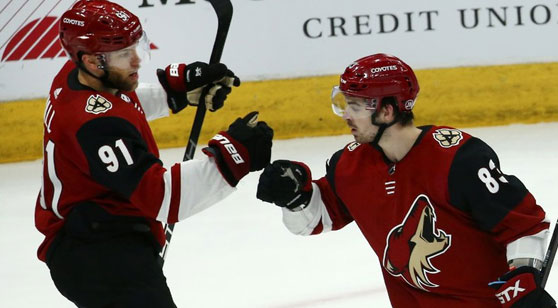 Taylor Hall and the Coyotes look to knock off the Predators in the best-of-five qualifying round. (AP)

Nashville is another team like Chicago where the question of whether or not their better days are behind them has to at least be asked. For Chicago, it's hard to debate that being the case, but with Nashville, after making the Cup Final in 2017, they were eliminated in the second round of the 2018 playoffs in seven games, and lost in the first round of last year's playoffs as the #2 seed in the conference. That is a trend that's going in the wrong direction for Predators fans, and it makes either of these futures bets tough to consider.

That being said, Predators fans have to be at least somewhat confident they'll be able to get by this younger Arizona club, and if as a bettor you land on that side of the argument then laying 40 cents for the series does feel like a solid bet. Either way, you probably want to take a series by series, or even game by game approach with this club in all likelihood.

Streaky is the best way to describe Nashville's close to the regular season before the stoppage, as in theri final nine games they had two three-game winning streaks, and one three-game losing streak. Going even further then that they also had two two-game losing streaks mixed in with another three-game winning streak in their last 16 games, so if you are a Nashville backer when things resume, you'd better hope that the Predators form is on the positive side of those outcomes.

However, I view all those streaks as just another potential sign that it appears the championship window for this organization is getting smaller and smaller. Championship caliber teams go on losing streaks all the time, but the best ones keep those streaks at a minimum and squash them as early as they can. Those same teams tend to not have three different losing streaks of multiple games in a 16-game span, especially when a few of those losses – like a 8-3 defeat to Edmonton – were rather ugly.

By trading for Taylor Hall earlier in the year, Arizona made a clear statement that they were an organization that was tired of all the losing and they felt that this year's team had what it took to make a run at things. However, about a month after the trade was made, things really started to slide downhill for this Coyotes team and had the season continued on as is, the Coyotes and their 74 points in 70 games had 12 games to make up at least six points on others and that probably wasn't going to happen.

It's nice that this young team in Arizona does get to experience playoff hockey this year in it's unique format, and knowing/learning how to win is always going to be brought up as a negative for the Coyotes in this series. Without question there is a clear experience edge in favor of Nashville, but by no means should that be the heavy basis behind your reasoning for backing Nashville in this series.

It's definitely a negative in terms of the Coyotes futures outlook, but who knows, in a situation like this, maybe it is the younger teams who find more success simply because they've got the youth to deal with producing better results in this situation. Those prices are long for a reason though, and even if the Coyotes do gain some winning knowledge by beating Nashville, going through the rest of the Western Conference is exactly like Arizona's playoff chances would have been had the season continued; possible, but highly unlikely.

Arizona's form before the stoppage was about as average as it gets with a 5-5 SU record, but only one of those wins came against a team from the Western Conference (Vancouver). That speaks to the easy nature to pass on Arizona's long term odds here, but it does speak to the Coyotes ability to squash poor play relatively quickly. Arizona was able to go from February 4th until their last game on March 9th without losing three in a row, and that rebounding nature should serve them well in a brief five-game series to open things up.

These two teams split their two matchups with each team winning at home and there really isn't a whole lot to take from those games and apply to this series. What may be the best piece of info you can glean is the fact that both meetings finished with at least five goals scored which means looking at 'overs' in individual games in this series may be something to consider. Goalie play has been quite suspect at times this year for both sides, and after such a long layoff, we may see those goalies need a start or two to shake off all that rust.

For whatever reason, the whole narrative with any team needing to 'learn how to win' gets beat to death and is only an issue until it's not. In all walks of life, eventually the established veteran gets toppled by youthful skill, strength and exuberance, and it's as true in sports as it is in lion prides when they are trying to establish a new leader.

Arizona made a point this year that they were an organization looking to win now, and you can't get playoff experience without getting their first. Who knows, maybe in a few years if Arizona becomes a consistent fixture at the top of the standings each season, the organization will point to their luck of getting invited to this 2020 format as the starting point of what they became.

Nashville is a team that I view as one that have seen their championship opportunity come and go with this current core, and just like last year when fresh blood in the Colorado Avalanche knocked off the established Predators in the 1st round, it's Arizona's turn to do the same this season. I mean, look at what Colorado did this year after gaining that experience and “winning knowledge.”

That's the path this Arizona team could end up finding themselves on in the coming years, but it all starts with a series win this season.