Chicago's another team that's counting down the days until vacations, losers of five in a row entering tonight. The Hawks were never really in the game last night as big underdogs, and with each of Chicago's last four opponents now scoring at least four goals, trying to pick a spot to back this team the rest of the way just isn't worth the headache.

The Hurricanes are looking for their fifth straight win as they want to claim top spot in the Central Division, and I don't think they screw around here. It'l be another game where an early lead is followed by Carolina's defense locking things down, with the regulation line always my preferred choice if you want to eliminate some of that chalk. 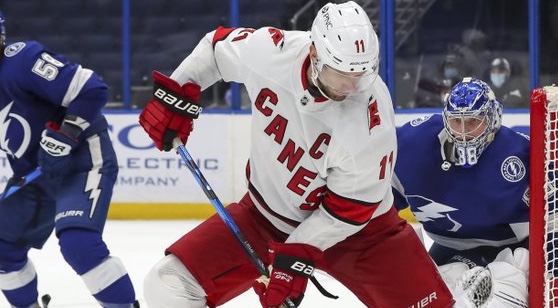 The Carolina Hurricanes have won eight of their last nine home games after winning inside PNC Arena the game prior (AP).

Chicago is coming off of a 2-5 loss to Carolina, marking the fifth straight loss for Chicago. Carolina's most recent win over the Blackhawks sees them on a current four-game winning streak.

Carolina's won the last two meetings against Chicago, including three of the last four games. The goal total has gone OVER in four of the last five games played between the two clubs.