Washington's had two very eventful victories over the Rangers this week and for the range of emotions those games brought, it's hard not to wonder if one of those “flattish” efforts is coming from the Caps. Shouldn't be too much to fear against a Philly team playing out the string – and the Caps finish with all three remaining games at home – and I'm not sure the Caps have the energy to get involved in any more extracurricular activities.

Making a case for an 'under' is a bit tougher considering the head-to-head series is 5-1 O/U this year, but Philly doesn't care about the result, and Washington would love an early lead and lock things down from there. The season series history is probably behind this looking like a good buy-low spot on a situational 'under' where energy from either side is going to be hard to find. 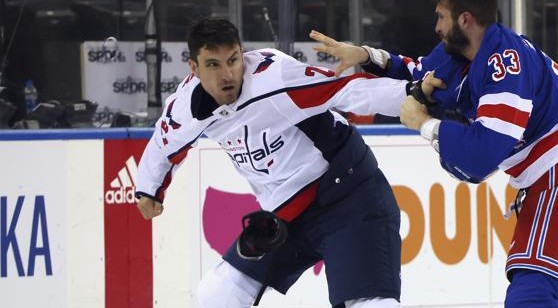 The Washington Captials have won nine straight games when playing as the favorite after winning on the road the game prior. (AP)

Washington is on a two-game winning streak, beating the Rangers in two very controversial games. Tom Wilson was fined, but not suspended, for dirty hits to a few Rangers players. This resulted in various fights in Washington's last game, winning 4-2.

The Flyers lost their last game 7-3 but won the game prior 7-2. Philadelphia has seen at least one team score four goals in seven straight games.

Washington has won the last five meetings against Philadelphia, covering the puck line in all five games. The goal total has also gone OVER in four straight meetings between the two clubs.