Minnesota needs to win two road games in St Louis and have Colorado not pick up a single point in two home games vs Los Angeles to move anywhere in the standings, so it's reasonable to assume the Wild have resigned themselves to having that No. 3 seed.

Meaning this game is a get in and get out healthy game for both sides as they conclude the year against one another these next two days. Would guess we are likely to see a split in terms of the outright winner in the two meaningless games, but a split on backing the 'under' in both games feels like the floor in terms of betting potential here.

It starts with backing the 'under' here in that belief, as hopefully guys are just interested in going through the motions to keep any rust off prior to the postseason. 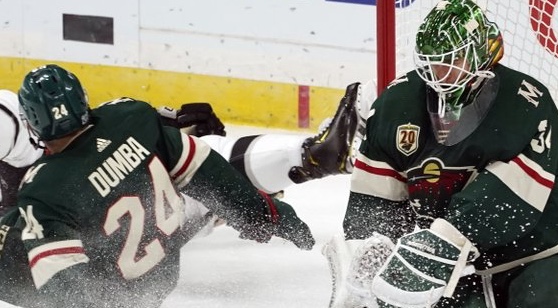 The Minnesota Wild have failed to cover the puck line in five straight games when facing the St. Louis Blues. (AP)

Minnesota has won back-to-back games but the final score of 4-3, beating Anaheim in both games. St. Louis won its last game 2-1, snapping a three-game losing streak. St. Louis has failed to score four or more goals in six straight games.

Minnesota won the last meeting 4-3, but the Blues won four straight games prior. The goal total has gone OVER in three straight meetings, along with four of the last five. St. Louis has covered the puck line in five straight games against Minnesota.